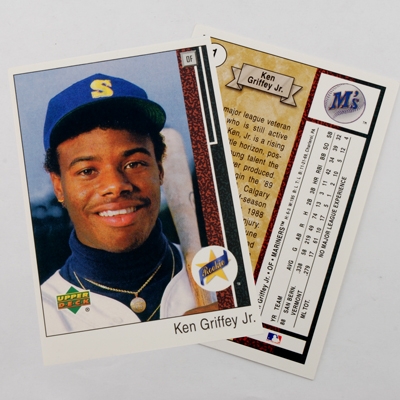 I was 11 in the fall of 1998. My great-grandmother has just passed away; because she lived in New York and was ill for most of my life, I didn’t know her very well, and met her only twice that I remember, though a few more meetings happened when I was an infant. Nevertheless, she left me what seemed like a princely sum to me at the time: $500. My grandfather, with whom I began my card collecting career, had a great suggestion — that I should put $400 away in my bank account, but take $100 and buy something I’d always remember her by. It was clear that the special something would be a baseball card.

My mother worked with a woman whose son was going to college and wanted to sell his baseball cards. He had two cards I could purchase for $100. One was a 1989 Upper Deck Ken Griffey Jr. rookie; the other, a 1985 Topps Mark McGwire Olympic rookie. “No one will ever beat McGwire’s record,” my grandfather explained to me, both of us oblivious to the steroid-induced freight train named Barry Bonds who would belt 73 home runs 3 seasons later. The choice was clear, and that week, I went to their house, stood in their garage, and handed over a Benjamin for a Mark McGwire rookie card with 3 pretty decent corners. To this day, I still have the card, and it does remind me of my nana.

Obviously I made the wrong choice, but for years, my choice wasn’t THAT wrong. The Griffey wasn’t worth $100 either after a short period of time, and while it was worth more than what McGwire’s card, I still would have paid way too much for it.

Griffey didn’t die, didn’t suddenly break any records, hasn’t been in the news. So what gives? I have two theories:

1) The 30-year rule of collectibles. I apply this rule for collectibles of all types, including cards. For the first 30 years, value is speculative: people are buying and selling based on what they think this item will one day will be worth. For the next 30 years, the item is actually in demand. This happens because the people who owned or dreamed of owning the item as a kid now have expendable income and maybe even children of their own they want to share the joy of their childhood with. (This is why things like TV shows and movies typically follow this reboot cycle.) For the next 30 years, the value either solidifies if an item continues to be in high demand by the next generation, or drops off tremendously as the original generation retires, downsizes, and passes away. The Griffey is now 31 years old. Stuck at home in a quarantine, waxing poetic about the good ol’ days, and with a stimulus check to spend, perhaps throngs of 80s and 90s kids are buying up The Kid.

This doesn’t really explain the seemingly overnight burst in sales, though, so I have a second theory:

2) Ken Griffey Jr. is the Michael Jordan of baseball. Jordan card values have exploded over the past two weeks as ESPN’s The Last Dance, a 90s Bulls retrospective, has been airing. Along with Jordan, other 90s basketball stars have seen an increase since the episodes began airing. Jordan has a claim to the title of greatest basketball player of all time; Griffey is not in the same conversation for baseball. But they were the greatest players in their respective sports at the same time. Griffey was iconic and widely-known even among non-baseball fans. It is entirely possible that the 90s collectors driving the Jordan hysteria now are bleeding into baseball, with the only logical choice for that time period being Griffey.

Whether the increase in the 1989 rookie card is short-lived or a new normal for the market remains to be seen, and I’m not sure I have a feeling one way or the other about it. But the 30-year rule here just doesn’t sit quite right with me, since the price increases happened so quickly. I think a much stronger force is at play: nostalgia.
baseballbaseball cardsinside the pack