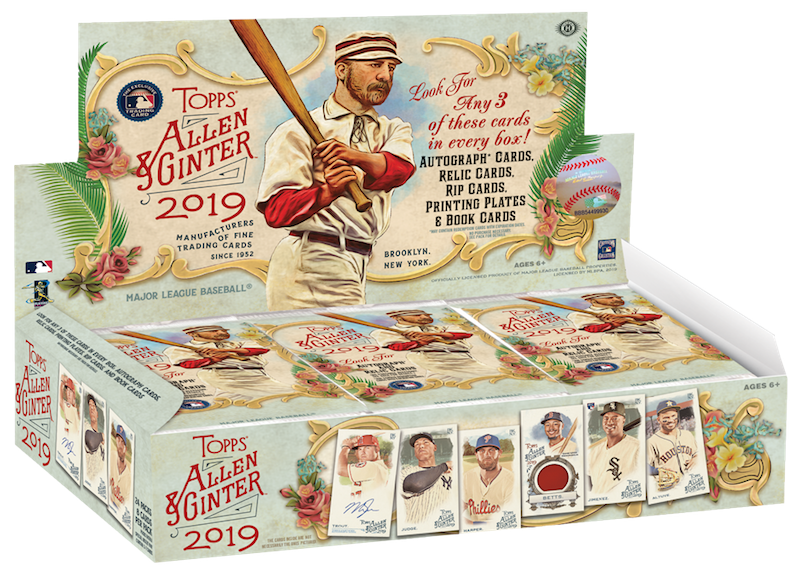 One of the happiest moments of my life started out innocently enough. “I’m at a Target in Jersey somewhere,” a Facebook message from my friend read. “This looks dope. What is it?”

Then he sent me a picture of a 2019 Topps Allen and Ginter hanger pack.

Much to my dismay, most of my friends don’t collect baseball cards, despite years of trying to change that. The friends I have who do collect baseball cards are people I met *through* baseball card collecting, but I’ve never been able to successfully convince my other friends to join in my cardboard obsession. So, I didn’t think much of it when I got that photo. I assumed the packaging caught his eye and he was just wondering what it was.

“It’s designed to look like cards from the late 1800s, and like the original set, it includes famous people who aren’t baseball players,” I explained. Then I sent a few photos of the cards that were sitting on my desk: Gary Vaynerchuk, Randy Johnson, and Post Malone.

His response was just about what I expected: “Weeeeeird,” he replied. If he thought that was weird, I needed to show him some of the oddball mini insert sets.

“Hahaha wow damn should I [mess] around and buy a pack?” he asked. “This is the dumbest weirdest coolest thing.”

This wouldn’t be the first time a friend of mine bought a pack of cards on a whim, so I expected it to end the same way: him having spent a few bucks, gotten no thrill out of it, and then no further collecting would happen.

After he bought a hanger pack, he filmed himself opening the 3 packs inside plus the pack with 3 gold border minis. He didn’t know most of the baseball players, even the Hall of Famers, but he enjoyed opening them. “This was fun,” he messaged me. “How many cards in the set?”

I knew right then that he was hooked. The next message I got from him read: “K so I got more.”

That’s when things really got cooking. He went online to order a blaster box, but frustrated with the shipping time, he decided to seek out a baseball card store and buy a hobby box. To those of us jaded by years of diminishing returns, his hobby box would have been underwhelming: his 3 hits were all jersey cards. But his excitement for each of them gave me fresh perspective on collecting for the joy of collecting, not resale value. (On his own, he had sought out box break videos on YouTube, and told me before opening his own box, “This guy got three jersey cards and I thought that was awesome but he and the people in his comments were like WHAT IS THIS TRASH?” It’s interesting to see how perspective works.)

In his research online, he found his new favorite card. “There’s one that is just [an] egg and I want it,” he told me. “It’s so stupid and I want 100 of them.” In our group chat, discussing the egg card became a hot topic.

After his first hobby box, he put together his set, found he was missing quite a few cards…including the egg. There was only one thing to do, so he went to buy a second hobby box — a decidedly better box, still with no autographs, but with a stained glass mini and a Rickey Henderson Framed jersey and, most importantly, an egg. With his need list down to just 60 cards, I instructed him on how to buy singles, and he did, completing his set.

The story isn’t over, though; he wants to build a mini set now. I casually mentioned the “East Coast National” show in White Plains, NY, which I’ve always wanted to attend. Next weekend he will make the trip there from New York City to get as many singles for his mini set as possible.

Is he a collector now? Doubtful. It seems like Allen and Ginter is his thing, so I’ll get the joy once a year of having a friend share in my joy of opening boxes and packs. But everyone starts somewhere, and maybe this random trip to a Target in New Jersey sparked a lifelong hobby.