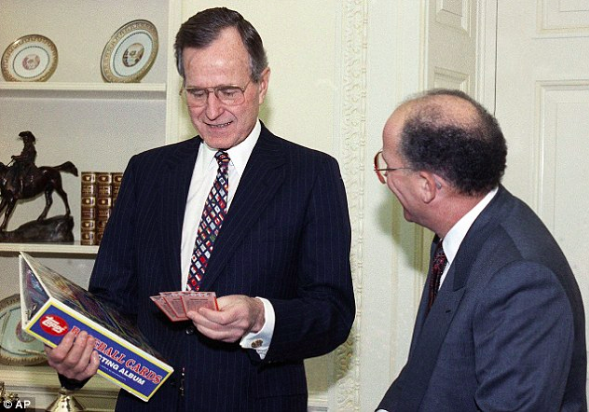 Most baseball fans know that former President George W. Bush used to be the owner of the Texas Rangers. Many baseball fans know that his father, the late President George H.W. Bush, was the captain of the Yale baseball team in the late 1940s. But not many people may know that in 1990, Topps produced a card commemorating Bush’s time at Yale — a card that is now not only one of the most valuable issues from the “junk era,” but one of the most valuable modern-day cards, period.

But don’t go digging through your boxes looking for this gem. The catch is that the card was never distributed to the public.

Topps made 100 copies of the card in the design of the 1990 baseball set to present to Bush. But mystery has surrounded the card ever since. Card shop owners in Champaign, Illinois, claimed to have pulled the card from a back in 1990. The story ran in People Magazine at the time, and while Topps claimed that there was no way the card would have been in a pack, it’s unknown how the shop owners would otherwise have gotten their hands on the card.

Another point of concern for people skeptical of the official “100 cards only” party line is that Topps prints cards in sheets of 132. If only 100 cards were made, then either 32 additional cards were made and destroyed, or those 32 other cards got out somewhere.

Another wrinkle was introduced when former Bush Chief of Staff and card collector John Sununu submitted 3 of his cards to PSA for grading. PSA recognized that these cards were glossier than standard 1990 Topps cards, including other Bush examples they had graded. After PSA conducted extensive research, including a discussion with former Topps CEO Arthur Shorin, it was determined that the cards that had been presented to Bush had this coating present. The copies without the coating were still authentic, but were not “White House” copies. It is now fairly well-accepted that some Topps employees received personal copies, and that one former employee in particular unloaded as many as 70 copies onto the open market.

In any event, the card is so rare that even reprints routinely sell on ebay for upwards of $100. In January, a PSA 9 example sold for over $25,000. Topps seems to recognize the value in its scarcity. Despite all the times Topps has reprinted famous cards, it has never reprinted this one for inclusion in any set. (Good move, Topps!) The closest they have come was in 2013 Topps Archives, where they used the same design for the younger George W. Bush as an homage.

I recently got to see and hold the 1990 Bush card for the first time, and after years of reading about it, it lived up to the hype. So if you’re a 1990 Topps fiend, an Alex P. Keaton wannabe, or just a deep-pocketed collector looking to make a savvy investment, save up and try to track one of these down. They don’t disappoint.