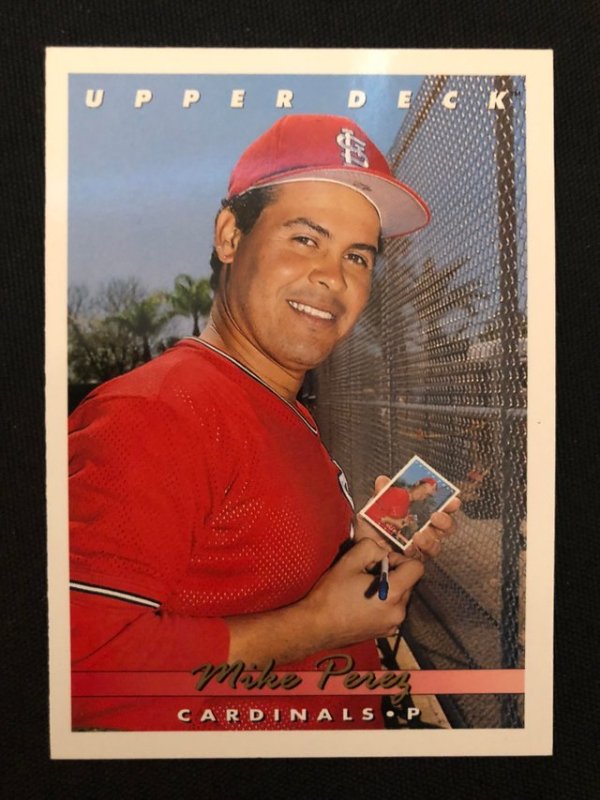 I wrote last year of my most valuable card — a Steve Carlton autograph with little value on the open market but an enormous amount of sentimental value to me. My personal collection is littered with cards like this, where the stories and memories outweigh the monetary value. I hope to continue highlighting some of these cards and their accompanying stories going forward in this blog.

But while most of these sentimental pillars have at least some value, one card in particular in my personal collection has almost no value, and the card itself is so common that the copy I keep in my collection is almost certainly not the copy I first fell in love with.

1993 Upper Deck (along with its 1994 counterpart) was one of those products I think I must have opened 100 boxes of. As I noted in my first blog post last year, I got started collecting by opening boxes and packs my grandfather had bought on super clearance. There was a lot of 1987 Topps and 1988 and 1989 Donruss rack packs, but there were also many boxes of 1993 and 1994 Upper Deck. Both sets may be contenders for the most boring set design of all-time (hey, there’s a blog post idea!). But I loved opening them because, strange as it sounds, the cards had a wonderful smell to them. Also, they were baseball cards, and I’d open any baseball card pack you put in front of me. What did I care what they looked like?

I’ve never been able to figure out why or how this picture came to be. Was this Perez’s idea of having fun at spring training? Was the photographer just dying to test out a new trick? Of all the players that would have been a Cardinal at that time, why Perez over, say, Ozzie Smith or Ray Lankford or Bob Tewksbury or Lee Smith? As much as I tried to find an answer, I couldn’t track one down.

The copy of this card I currently have in my personal collection is a random one I found in one of my boxes a few years back. I know I’ve owned more than a dozen of these cards at some point. Unlike the Steve Carlton autograph, the specific card isn’t what I love here. Rather, it’s the idea of this card, and the feeling I got when I saw it the first time. My collection wouldn’t be complete without this card.