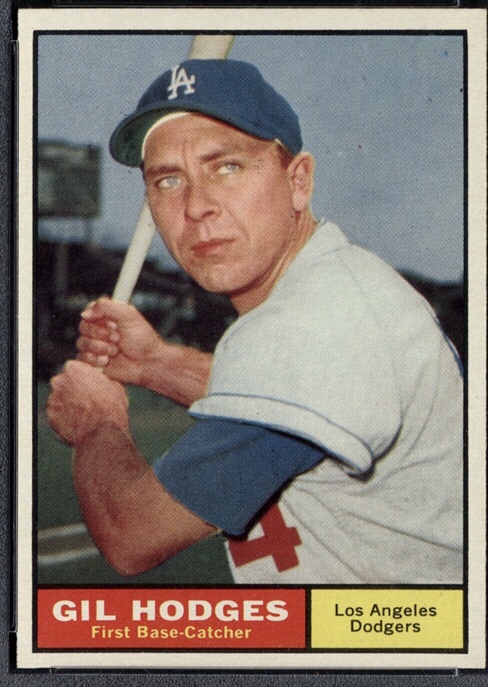 One of the many things I love about collecting baseball cards is that it seems that no matter how many times I look at a card, I can still discover something new and different about a card. In a blog post last year, I noted that I’d never considered who was sliding into home on my favorite card of all time until someone at a card show asked me.

I had a similar such moment last week as I was flipping through my personal collection and admiring another of my favorite cards, the 1961 Topps Gil Hodges. Hodges was a member of the stories my grandmother used to tell me about the Brooklyn Dodgers, and though he didn’t capture my heart the way Duke Snider did, he was a huge part of the lore. I have always loved the way this card looks. Gil is staring off into the distance — notably, not into the camera — as if he knows this is to be his last photo shoot for the only team he has ever known before being taken by the New York Mets in the expansion draft after the 1961 season. The bold blue of his cap and undershirt sleeve stands out in contrast to the pale blue of the sky in the background, and both are complimented by the piercing blue of his boyish eyes. If this image were a painting hanging in the Louvre, we’d be lauding its artist for the brilliant composition and ability to evoke feelings of energy and excitement despite being a completely posed and static image.

For some reason, I feel like this picture sort of sums up Gil Hodges. He was one of the most beloved members of New York baseball. Best known for being an anchor of the Dodgers teams throughout their final decade in Brooklyn, Gil finished his playing career for the expansion New York Mets, then managed for the Washington Senators before going back to the Mets and managing the 1969 team to their worst-to-first World Series title. The Hall of Fame debate about Hodges still rages on to this day; for some (like me), he’s a no brained given his respect from his peers, his achievements as a player (until his final season when Willie Mays passed him, he had more home runs than any other right handed hitter in National League history), and his Miracle Mets team. For others, he falls short when comparing his statistics to other first basemen who came about around the same time his career was winding down.

Oh, yes, have I mentioned that Gil was a first baseman? He came up as a catcher, but the Dodgers already had a future Hall of Fame catcher in Roy Campanella, so the team found room for him at first base. He became a great fielder — certainly the preeminent fielding first baseman of his era, and possibly one of the best ever, especially for a righty.

Staring at this card for, I don’t know, the 200th time in my life, something jumped out at me that I had never seen before. There, below his name, were seven totally baffling letters.

As I said, I knew Hodges had come up as a catcher and played some pretty insignificant games as a backup there early in his career. But at the end of his playing days in 1960, did he really switch back to catching? That seemed hard to believe. Was Topps honoring a man at the end of his rope for having caught earlier in his career? That’s not a Topps thing either. So, is there a chance Topps just made an error?

With this as the most plausible explanation, I began my research very simply — by looking at the two cards that sandwich this one, 1960 and 1962. Both the 1960 and 1962 cards have Hodges listed as a first baseman and nothing more. (As an aside, as much as I love the 1961 Hodges, the 1960 and 1962 issues of him may be among my least favorite cards. I hate nothing more than hatless closeups on baseball cards, and while the 1962 card likely required the absence of a hat due to Gil’s move to the Mets, there is no excuse for the lack of cap in the 1960 photo.)

My next step was to check the stats on Baseball Reference and see if he did indeed catch during the twilight of his career. Despite the 64 career games at catcher, including single game appearances as a backup in 1956 and 1958, Hodges played mostly first base in 1960, along with 10 starts at third base. In 1961, he was limited solely to first base. Was Topps’s error that they meant to write First Base-Third Base, but accidentally wrote catcher instead?

I did some more digging, coming up empty everywhere I turned. Finally, I thought of trying to track down a season preview in a Dodgers media guide or magazine, to see if there was any indicator of Hodges as a catcher.

As luck would have it, Sports Illustrated’s SI Vault had an online copy of the 1961 baseball preview from April 10, 1961. This is where the pieces fell into place and I discovered Topps had not made an error — they were just trying to get ahead of the ball when something seemed fairly certain, much like the 1974 switch of the San Diego Padres to the Washington National League team. In the team preview, after extolling the strengths of the Dodgers ballclub, SI hones in on its one weakness, noting:

Truly, the only weak spot on this team is the catching. John Roseboro does not have it, defensively or with the bat. Norm Sherry may have the equipment; he doesn’t have the experience. Manager Walter Alston has tried Gil Hodges as a catcher in spring training, and Hodges, a thorough pro, looks good. His bat would be a big help, and his arm, too.

This is the only reference to Hodges catching in 1961 that I could find. 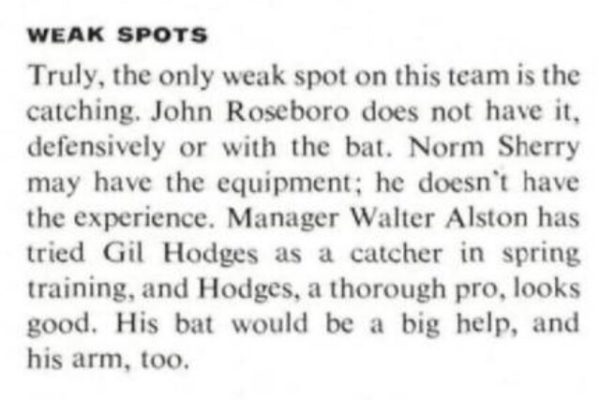 Having been printed in early April, Hodges must have been so convincing in the role of catcher that the folks at Topps believed, either through their own analysis or having received word from a team official, that Hodges was going to catch that season. But something must have happened between the publication of the April 10 edition of the magazine and Opening Day on April 11, because Gil never donned his catching gear that season. It must have been Roseboro’s hot start — despite Sports Illustrated’s assertion that he did “not have it,” the Dodgers starting catcher got off to a torrid start in April, hitting .256 with a .396 on base percentage and slugging .513. In fact, Roseboro would end up leading the team in home runs that season with 18. Further cementing Hodges’s permanence at first base, backup catcher Norm Sherry also made the most of his opportunities, hitting .286 with a .348 OBP and .541 slugging percentage over the months of April and May.

So, it turns out Hodges never caught in 1960 or 1961, but this card was no error. It was simply a detail I didn’t catch until the wording caught my eye after years of looking at the card. It’s an example of the beauty of baseball card collecting. One single card can provide years of enjoyment and turn up new delights each time you interact with it.