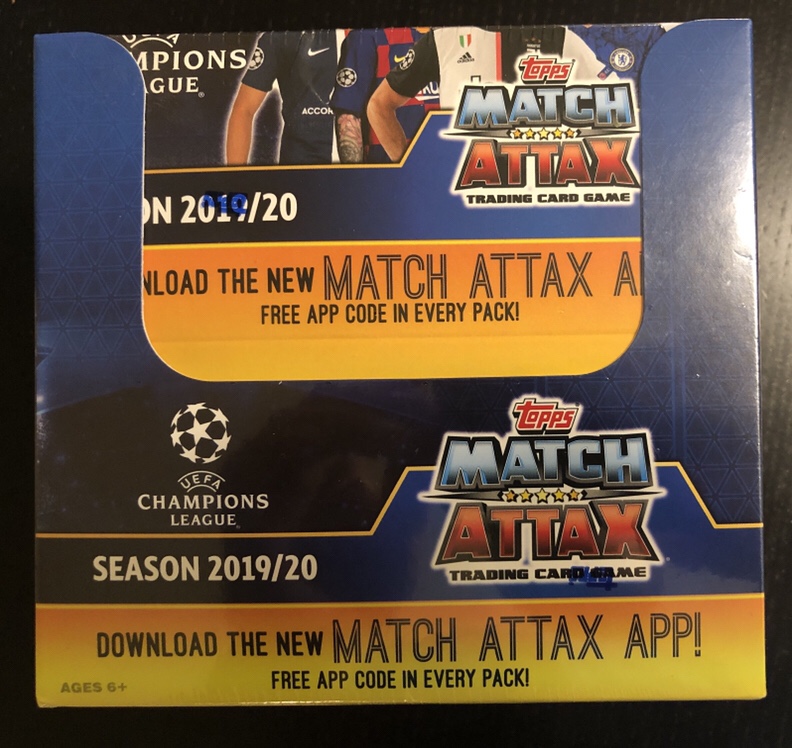 Topps Match Attax UEFA Champions League is a product that’s part trading card game, part digital card app, and all fun, even if you don’t play the games or use the app. Display boxes are loaded with 300 cards distributed over 50 packs, making for a long fun rip guaranteed to please.

Topps sent me a display box to review. Match Attax is designed as a two-player game wherein players build a team with the intent of outscoring the other team. Players put together a team with 11 players and 3 subs with a salary cap of 100 million pounds. Tactic cards allow players extra help, like more points or more salary space.

I’m not interested in a game, however, but the product is still a fun rip. Even if the cards are designed with the intention of gameplay, they’re still quite attractive. Base cards have a black background with a linen-type textured surface with a beautiful color photo of the player along with the player’s ratings and salary for the game. For those not interested in the game, the ratings are formatted nicely and colorfully enough that they don’t detract from the card. Every pack contains a card with a code for a free digital pack on the Match Attax app. Most, but not all, packs have a parallel card as the last card in the pack. Parallels are easily identifiable because they all have different colors than the base cards. The most common of these is Pro Performers, inserted 1 in every 2 packs. These have a yellow-gold color rather than black, but retain the textured finish of the base cards. Trophy cards occur every 2 packs and contain a team logo along with a summary of the championship titles won by that team. Tactic cards do not have any official seeding listed on the packs, but I received just 3 in my 50 packs.

The other parallels ditch the textured finish in favor of a shiny holofoil. The most common of these is the Club MVPs, seeded every third pack, on average. True to the odds, I pulled 16 in my 50 packs. The pack also says that Man of the Match cards are inserted at the same rate, but I pulled just 9 of these. Same with Record Holders and Hat-Trick Heroes, which have a gold finish; though the stated odds are 1:3 for both, I received just 2 and 3 of each, respectively. 100 Club cards, with a blue finish, are inserted 1:10 packs, and I got the requisite 5. Golden Squad Limited Edition cards are 1 per box.

The latter was my biggest pull, a beautiful card of superstar Cristiano Ronaldo. I also got a Club MVP insert of Ronaldo. The rest of my big hits were of Lionel Messi, of whom I received a Record Holder, Hat-Trick Hero, 100 Club, and Club MVP card of. I also got cards of other huge stars, like the 100 Club insert of Virgil van Dijk. VVD is the star Liverpool defender who, if the leaked news over the weekend is true, will win his first Ballon D’Or award later today.

All in all, with a low price point, this is a fun rip. Even if you’re like me and have no intention to play the game, the cards are attractive and the parallels are fun. With a chance to get some of soccer’s biggest stars for not a lot of cash, it’s a worthwhile venture.