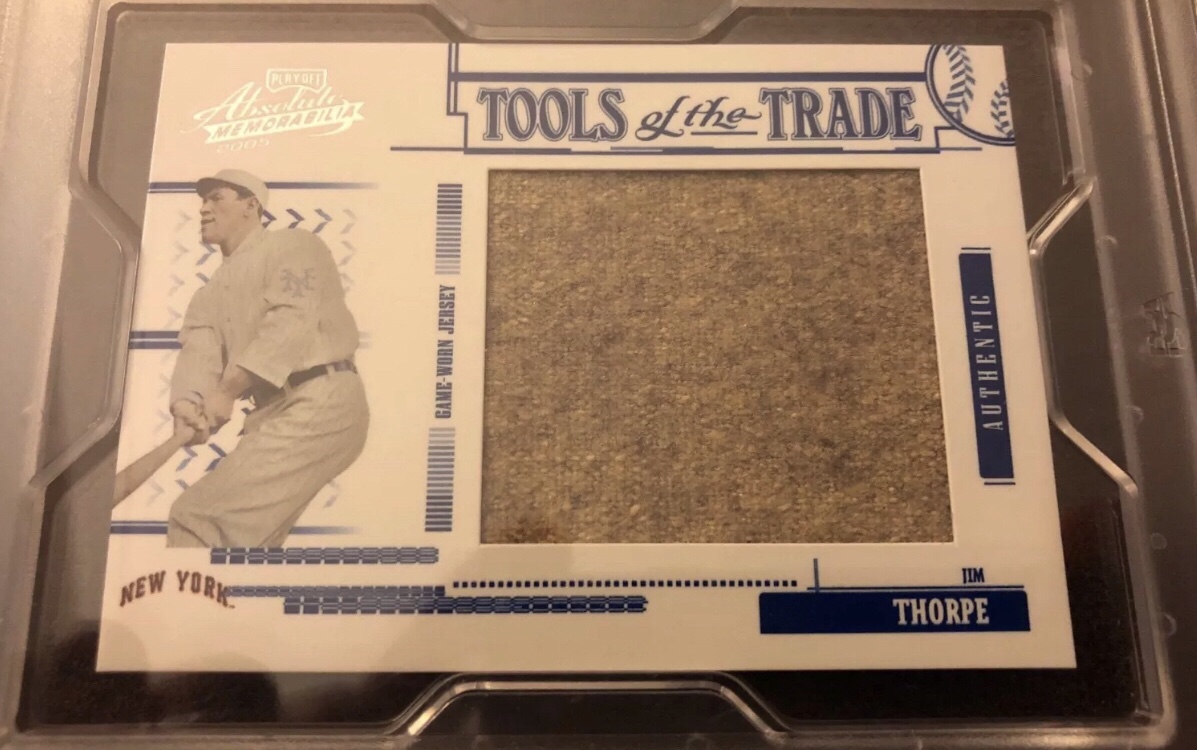 Thanksgiving is typically a holiday associated with football rather than baseball, but I like to tie in holidays to blog posts here at Inside the Pack. So in honor of Thanksgiving this year, I’d like to discuss the greatest Native American athlete — and maybe the greatest American athlete — in history. I’m talking, of course, about Jim Thorpe. Though he is best known as a football player and Olympic track and field gold medalist, Thorpe also played Major League Baseball for parts of 6 seasons between 1913 and 1919. It’s worth noting this means that at the height of his popularity as an athlete, Thorpe played his entire baseball career prior to the recognition of Native Americans as American citizens, which didn’t come until 1924.

Thorpe’s baseball career was short and uneventful, and he played at a time when baseball cards were not prevalent. However, due to his national popularity, he has more cards than the average player of that era. According to Beckett, Thorpe had 16 issues during his actual MLB playing career, with a 17th card coming in 1922. That card, from the 1922 Zeenut set, shows Thorpe with his last professional team, the Portland Beavers of the Pacific Coast League.

As you might expect, Thorpe’s baseball cards from his playing days are extremely pricey. They’re also extremely difficult to track down on the open market — at the time of publication of this blog post, only one 1922 Zeenut card was available on ebay, and none of Thorpe’s other playing-day issues were available. That means that collectors with shallower pockets can’t rely on a contemporary card in order to get Thorpe into their collections. Luckily, there are other ways to own cool Thorpe cards at affordable prices.

The best way to get a vintage Jim Thorpe card in your collection will also get a vintage Hall of Famer in your collection at the same time. That’s because after the 1922 Zeenut issue, the next Jim Thorpe card released was in Fleer’s 1959 Ted Williams set. This card features a portrait of Williams and Thorpe standing next to each other at the 1952 Sportsman’s Show. The back of the card refers to Thorpe as “the Old Injun”, but most of the text is devoted to Williams, the subject of the set. This card was issued about 6 years after Thorpe died, but it’s still a vintage card containing Thorpe. A raw copy will only run you a few dollars, while a PSA graded 7 typically sells for less than $20. Even a high grade example is affordable: a PSA 9 sold recently for less than $125.

Another way to add a vintage Jim Thorpe card to your collection is to cheat a little and make it a football card. The 1933 Goudey Sport Kings set is a multi-sport set with many baseball players, including Babe Ruth. Thorpe is also part of the set. His card is technically a football card, but his photo on the card doesn’t show a football helmet, a football, or a uniform logo; the only way to know it’s a football card is because there’s a football scene at the bottom of the card, and “(FOOTBALL)” appears under his name on the back. Thorpe was already retired from both baseball and football at this time, but was still living, which is a plus. Low grade raw cards go for around $100, while a PSA 3 (MK) recently sold for less than $400.

If vintage isn’t your thing, or if you want something a little different, you can still add a Jim Thorpe card to your collection. According to Beckett, there have been 93 baseball relic cards of Thorpe issued over the years. That doesn’t count any of football relic cards, either. Despite the perceived rarity of a Jim Thorpe relic, these are actually fairly affordable cards, with many of them costing less than $100.

While you’re unlikely to find an reasonably-priced Jim Thorpe card from his playing days, there are plenty of affordable ways to get a card of this legend. Of course, you could always save up and go for the real deal, but in the meantime, you can’t go wrong with one of the options above.