Being on a baseball card is a dream for just about every fan or collector. Paul Lukas, founder of the blog Uni Watch, got closer than just about any of us ever will. There are a lot of niche blogs on the Internet, but only Uni Watch makes me feel like my weird obsessions aren’t weird after all. I started reading Paul’s columns about 15 years ago on ESPN and followed his journey to a personal blog shortly thereafter. At first, I couldn’t believe that there was another person, let alone a whole community of people, who would think about the same minor details as I do. As time went on, I became shocked that were so many minor details to obsess over that weren’t already on my radar. Over the years, I’ve continued to read Paul’s columns about uniforms and sports aesthetics as well as his freelance pieces on topics as varied as asphalt tags (which I never pass up an opportunity to tell people about when I spot one) and mailbox design (a topic that I pestered Paul about for a few years knowing that he would be the only person able to make sense of the wide array of varieties).

Paul’s journey to cardboard enshrinement ultimately fell short when he recently learned that he won’t be included in a product after all. Despite this, he got far along enough in the process to have his clothing cut up to make relic cards for this year’s Allen and Ginter release. But given his attention to detail and keen interest in the minutiae of processes, I can’t think of a better person to experience a stoppage in the middle of this journey.

Paul was generous enough to answer a few questions for me about what it’s like to prepare to be on an Allen and Ginter card. 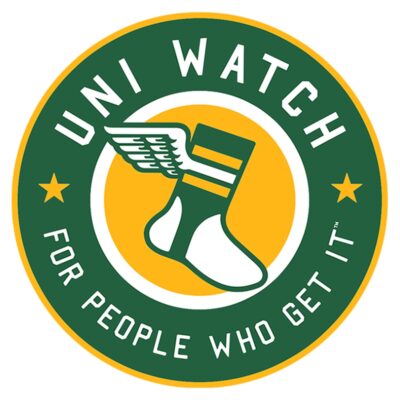 Inside the Pack: I’ve been a loyal Uni Watch reader for a little over a decade and my wife knows your name rather than my having to say “The Uni Watch guy.” But for the uninitiated, can you briefly explain the site?

Paul Lukas: Uni Watch is daily blog that obsesses over sports design — or, as I like to call it, athletics aesthetics — in excruciating details. We mostly focus on uniforms, but we also look at logos, field/court/ice design, stadium/arena design, and other things that relate to the visual aspect of sports. We occasionally delve into non-sports design topics as well.

ITP: You’ve described yourself as a “big baseball card collector” when you were a kid. What was your collection like and when did you fall out of collecting?

PL: I was born in 1964 and began collecting cards in 1972, when I was eight years old. Nothing special about my collection — I was just the typical suburban kid buying a pack at the candy store after school, hoping to get cards of my favorite players, poring over the stats on the back, occasionally trading or flipping with friends, saving everything in a shoebox, and so on.

I continued up through 1976 and then stopped after that — I don’t recall why, although it may have been because I had entered junior high school, and our junior high was not situated next to a candy store like our elementary school was, so I no longer had easy access for buying cards on a whim. Or maybe I just got more interested in other things — honestly, I don’t recall.

I also don’t recall what happened to my 1970s cards. Did I sell them? Did my mom toss them? I don’t remember. I just know they’re long gone.

ITP: I saw earlier this year around Super Bowl time that you became a 49ers fan as a kid when you got a Ken Willard card in a box of Corn Flakes. Are there any other specific cards that stick out in your memory?

PL: Around the same time I got that Ken Willard card, which was from a Kellogg’s “3D” card series, I also got a Tommie Agee card from that same series. I grew up in a Mets household and probably would have ended up as a Mets fan anyway, but the Agee card definitely played a role in my becoming a Mets fan. It also made Agee my favorite player — I got a big poster of him that I put on my bedroom wall and was heartbroken when the Mets traded him in 1973. To this day, I smile when I see footage of his two great catches in Game Three of the 1969 World Series. All because of a trading card that I found in a box of cereal!

ITP: Okay, onto the good stuff. In December you shared that you’d been selected to be featured in 2020 Topps Allen and Ginter and you noted you were previously unfamiliar with the product. Do you know how and why you were selected? When you found out about the product, were you surprised that cards with so many non-athlete subjects existed?

PL: A Topps representative contacted me — I believe his first outreach was via a direct message on Twitter — said that he and several of his Topps colleagues were big Uni Watch fans, and asked if I’d like to be on a card. Of course, I said yes!

I’d been out of the trading card loop for decades (I was aware that the hobby has grown exponentially since I was a kid but hadn’t kept up on things like ripper cards, relic cards, etc.), so I knew nothing about Allen and Ginter or the rise of non-athlete cards. It was all a big learning experience, and very interesting.

ITP: It’s most collectors’ dreams to be on a baseball card. Did you have to consider the offer at all when it came in, or was it an instant acceptance?

PL: I gave it some very deep thought for about 10 seconds. I mean, really, why would anyone say no? There’s no downside! It was a genuine thrill.

ITP: You went out of your way to take special pictures for your card, while most other celebrities seem to send in a headshot or other publicity photo. Did you receive any feedback from Topps on your photo selections?

PL: Once I said yes, the Topps guy said, “Okay, just send me a photo later today,” or something like that. And I said, “Wait a minute — if I’m gonna be on an official trading card, I’m not just giving you any old photo. I need to take a new photo specifically for this occasion!”

As I recall, that was on a Friday in December. So over the weekend, my girlfriend took a bunch of photos of me in our backyard. It was 30something degrees, but I was determined to wear a Uni Watch T-shirt, so we had to move fast because I was freezing!

I chose what I thought were the three best photos and sent them to Topps on the following Monday. I told them to choose whichever one they thought was best. I didn’t get any feedback except that they said all three photos were fine.

ITP: Following the initial contact, what sorts of steps were involved in the process?

PL: My Topps guy was a brand manager named Patrick O’Sullivan, and he was — and still is — basically the nicest guy in the world. Seriously, an absolute peach of a guy (and also a former minor league ballplayer!). He kept me posted on how things were coming along.

In late January it was time for me to give them a personal item to be cut up for my relic cards. I decided to give them the Uni Watch shirt I was wearing in the photo shoot, so I figured I’d mail that to them. But since the Topps offices are in New York and I live in Brooklyn, Patrick suggested that I bring the shirt to the office so I could meet him and his colleagues. So that’s what I did. Patrick gave me a tour of the offices, which was really fun. In addition to collecting baseball cards, I was also into Wacky Packages as a kid, and there’s a lot of Wacky Packages stuff displayed around the Topps offices, which I really got a kick out of. The whole thing was a hoot.

ITP: After you began the process, Topps contacted you to let you know you wouldn’t be appearing in the product after all. At your request, Topps sent you back the cut-up pieces of your shirt from your photoshoot that they had intended to use for relic cards. Most collectors have never seen a deconstructed relic card before. Did seeing these relics give you any insight into the internal process Topps uses to create these cards?

PL: Yes! It was fascinating to get the pieces back. I love knowing how things are made, how internal processes work, and so on, so retrieving my deconstructed shirt almost made up for the disappointment of my card being nixed. (I have since discovered a YouTube video that shows the process for the making of some Panini relic cards — again, fascinating stuff!)

ITP: What are you going to do with a sliced-up Uni Watch shirt?

PL: I like to come up with creative projects, so I’m going to produce my own trading card. Each one will come with a piece of my shirt, so the relic pieces will now be a relic of this entire experience — the experience of Topps asking me to be on a card, of MLB nixing that card, and of me creating my own card in response. I’ll sell those cards to my readers. It will be a nice way to bring some closure and resolution to this story.

ITP: Anything else about the process you think would be interesting to our readers?

PL: Allen and Ginter card subjects usually sign one card in red ink and 10 cards in blue. But as my readers know, because I’ve written about it many times, my favorite color is green and I really hate purple. So I asked Topps if I could sign one card in purple and rest in green, or something like that. They said they’ve occasionally gotten special color requests like that before and that they usually say yes, so it probably wouldn’t be a problem.

Of course my cards were never produced, so I never got to sign them. But I’m going to do the purple/green thing for my own card that I’m producing.