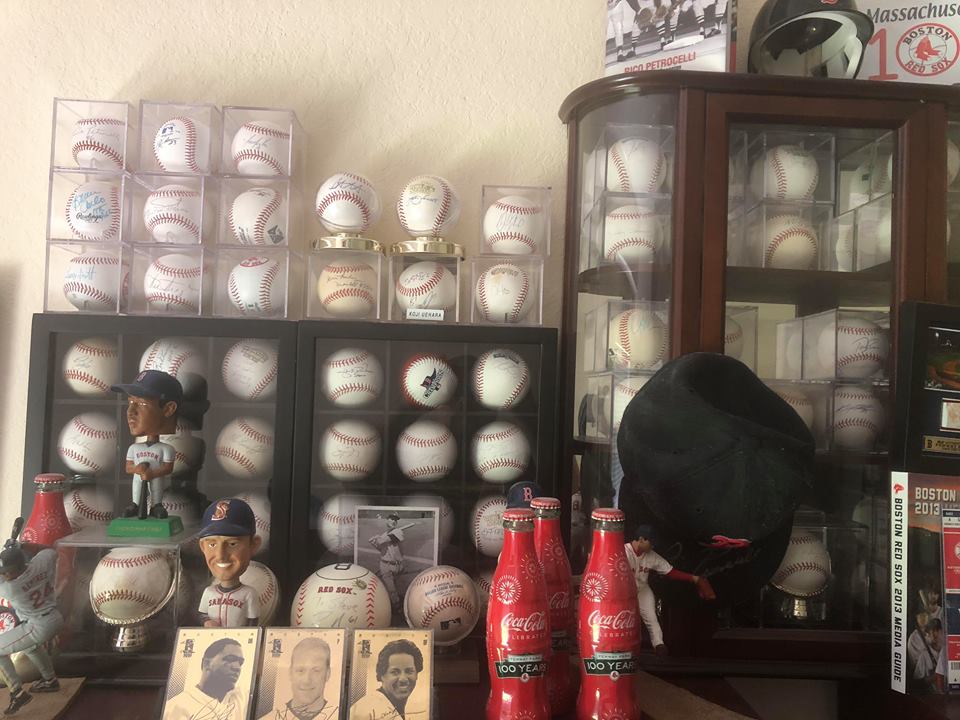 In the 2005 movie Fever Pitch, Jimmy Fallon plays Ben Wrightman, a Red Sox-obsessed school teacher with a Sox memorabilia collection — and wardrobe — large enough to cause shock among non-collectors and envy among fellow baseball fans. Nearly 1,300 miles away from Boston in Oviedo, Florida, collector Steve Masyada is a near clone of the fictional Wrightman.

The similarities are striking: Steve is a former school teacher with a room full of Sox gear. In the movie, Ben became a Red Sox fan at age 7; for Steve, the obsession started a little earlier, when he went to his first game at Fenway at just 5 years old.

Steve sports an impressive collection, which was born from his early days of card collecting. “I started collecting cards back in the early 1980’s,” Steve told me. “Every Christmas or for my birthday (also in December), my folks would get me the latest Topps set. Again, this was the 1980’s, so no amazing sets, but still, I would organize it by team and year and favorite player. Dewey Evans, right fielder for the Red Sox, always had pride of place in my collection.”

As is evident by the extent of his items today, he didn’t stop at cards. “I’ve since moved beyond cards to other memorabilia related to the Red Sox,” explains Steve. “I have more than 50 autographed baseballs, and one of the things I’m working on is trying to get an entire collection of autographed balls from the 2004 team. I have about 12 right now from that year.”

When asked about his neatest piece of memorabilia, Steve doesn’t hesitate at all. “The neatest piece of Red Sox history I have is a 1964 letter from Red Sox Executive Dick O’Connell to someone with the Dodgers talking about moving the Red Sox spring training home to Florida.”

Plenty of people are Red Sox collectors, though, so I asked Steve to focus on the crown jewel of his card collection, and something that is very infrequently found: a complete set of 1959 Fleer Ted Williams cards. The set is almost never found with all 80 cards, because the shortprinted card number 68 is so difficult to find that even reprints sometimes sell for $10. Steve didn’t always have his sights set on completing this set, but he decided pretty quickly that this set would be great for him. “I’ve always preferred the vintage stuff, maybe because I spent so long as a history teacher, but I just think they look so much cooler and have so much, well, history to them. You know how good these players will turn out to be. Anyway, I always wanted to collect a vintage set, but the cost was an obstacle. But then I came across the Ted Williams Fleer set online, and it did a few things for me. It featured the greatest Red Sox player in history. It was a good looking set. It was history. And, importantly, on an individual basis, the ungraded cards were affordable!”

The quest to put the set together was a long one for Steve. “I started it about 4 or five years ago, and added to it over time. I probably could have done it faster simply by buying the cards online, but it is so much more fun to discover the cards you need in person at a shop or a show.”

Steve also explained his quest to find the toughest card in the set. “I have the best spouse. So, one reason the complete set can be hard to put together is because of card number 68. This card features Ted signing his 1959 contract, but unfortunately for Fleer, the Sox GM [Bucky Harris] featured with Ted on the card was under contract to Topps, so the card was withdrawn (and think about that for a second; a baseball GM had a card contract. Not something you see today I think!). Anyway, this card even ungraded in decent condition can run in the multiple hundreds of dollars. I came across a good quality ungraded on Ebay being sold for about 200 dollars. But I couldn’t justify in my mind spending that much money on a piece of cardboard. Until my wife told me I needed to buy it. Really not much of a story I guess, but I just want to thank my Susie for making this collection possible. She always supported me in my habit, and would even send me links to cards.”

Finally, Steve offered up some sage advice to collectors putting together a difficult set. “Make sure your spouse supports you. Attend every card show you can. Become friends with your local card shop and maybe a dealer or two. Honestly, just keep at it!”

Do you have an interesting and unique collection that you’d like to see featured on the Inside the Pack blog? Comment below and we may reach out to write a feature on your collection!