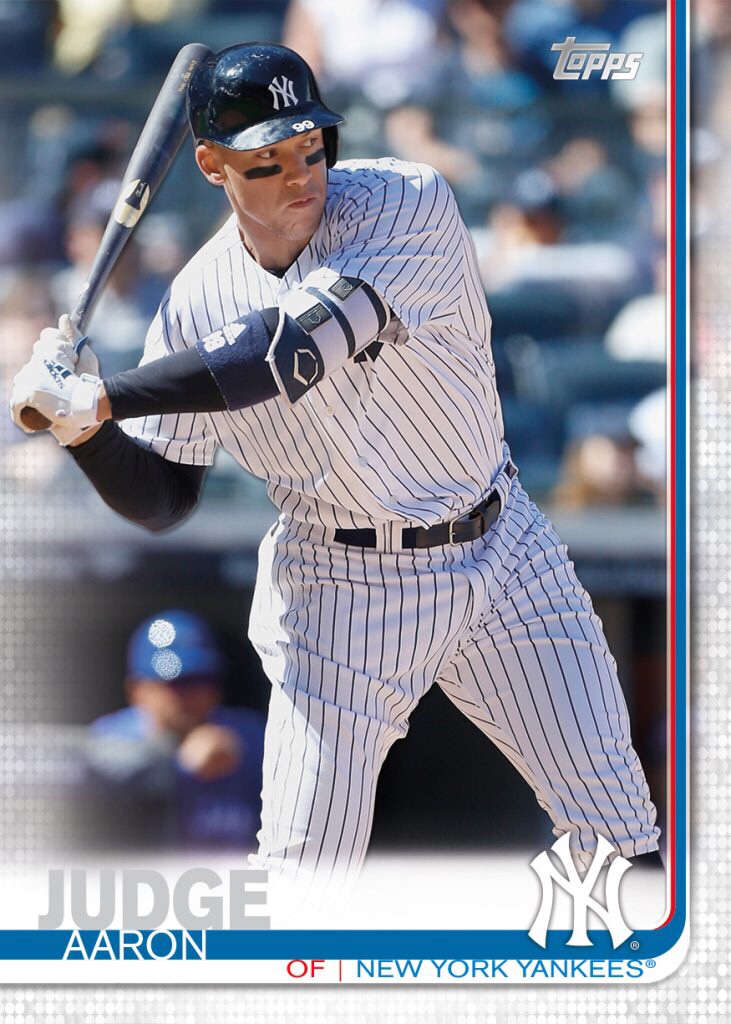 Last week, Topps issued mockups of the design for their flagship product. Many people love it. Many people hate it. Me? I’m torn, with some aspects I’m into, others I wish would go away, and a few that leave me just plain confused. Beginning in 2016, Topps removed the borders from its flagship product, allowing for full-bleed photography. Topps has had borders for almost its entire existence, so at the time, this was a shocking decision. But feedback among collectors was generally positive, with many people feeling that the extra real estate for photos lent itself to more action shots reminiscent of the Topps Stadium Club product line.

Now with its 2019 design, Topps is poised to bring borders back — sort of. The design features an outer border on the right and bottom edges. Previous borders were predominately white, though sometimes they were black, gold, green, blue, or wood grain. This border is patterned, with gray dots and diamonds checkered throughout a white border. The pattern, without a border, continues on the left edge, while the top edge of the card remains both borderless and patternless. This is my main point of confusion with the borders: why go through the major step of getting rid of them, only to bring them back? Furthermore, if the decision is to bring them back, why only bring back two borders instead of borders along the whole card?

The aspect of the border that I do like very much is its multi-colored lines with a curve, reminiscent of the 1982 Topps design. This is an awesome touch by Topps to call back to a unique retro future in a beautifully-designed set.

My next point of confusion is with player names. In recent designs, Topps has decided to put an emphasis on list names by making them larger. This is a design element Topps started in the early part of the century with the 2001 and 2002 sets, but is most evident recently in the 2018 and 2016 designs. The 2007 design had perhaps the largest difference in font size and the 2005 design had only the player’s last name along the top, with the full name along the side.

I don’t mind the larger last name as a design element. For 2019, however, Topps is doubling down on this idea. Not only is the last name larger, but it actually appears first, on top of the player’s first name. What is this, a class roster? I can’t for the life of me figure out the rationale for a last name coming before a first name on the front of a baseball card.

What I do like about the names, however, is the color scheme. The last name is in gray on a white background, with the first name in white against a team-colored background. I much prefer this to the recent trend of both names against a colored background, or the foil player names of years past.

Taken on a whole, I do like the design, besides these few head scratchers. The patterned border will look great with the various color parallels and I think the design will look dynamite in the Topps Chrome Issue. I’ve definitely become a fan of the borderless cards over the last few years, and I’ll hope for their return in 2020. But for now, I’m looking forward to the first great day in the 2019 calendar — the release of 2019 Topps Series 1.