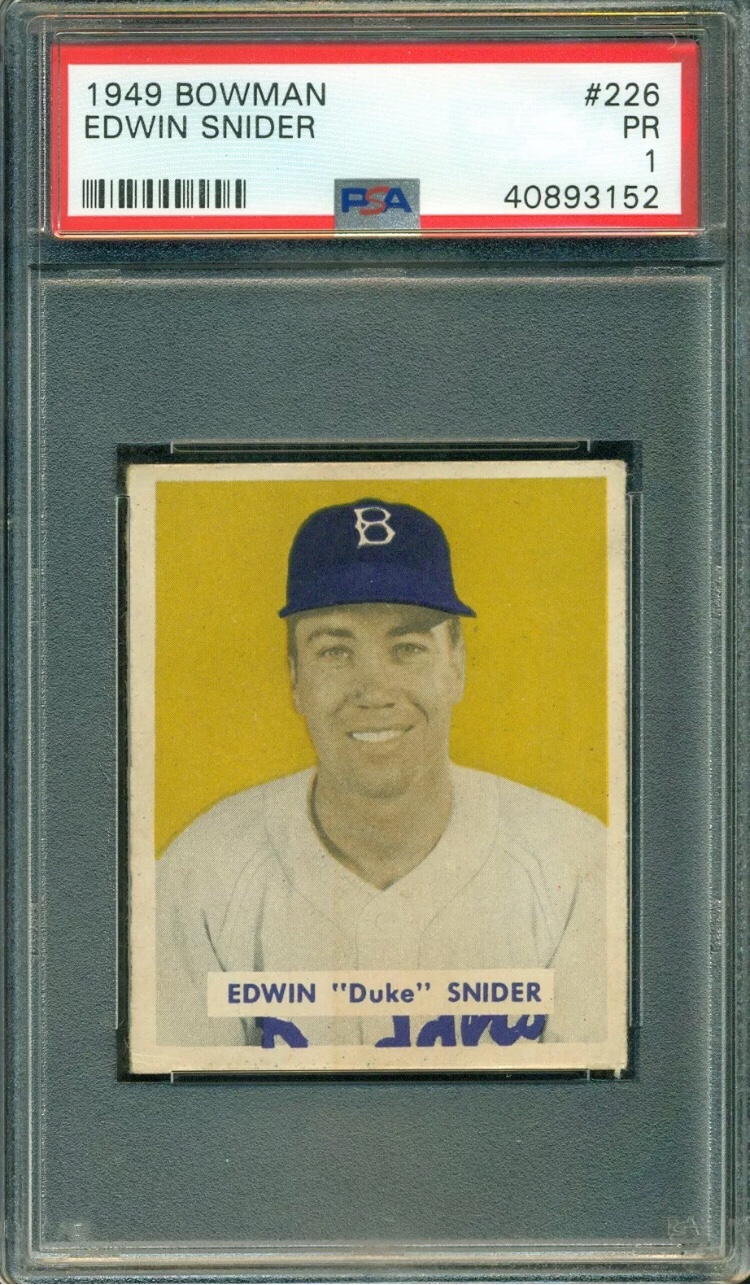 Third-party grading companies like PSA, SGC, and Beckett are run by humans and are therefore inherently subjective. Anyone who has ever looked at two of the same card in the same grade has noticed that one is better than the other, or that one appears to be undergraded, or that one appears to be overgraded. It’s for this reason that collectors of graded cards have the saying that appears in the title of this blog post: buy the card, not the holder. In a nutshell, this expression means to use your own eyes to determine what card is aesthetically pleasing to you, rather than relying on someone else’s eyes and a numerical grade they decided the card warranted.

I recently experienced this saying personally. One of my player collections is Duke Snider. While I am not a Dodgers fan, my grandmother grew up a Brooklyn Dodgers fan and I was raised hearing the lore of the team. Since I am left-handed I tend to gravitate toward left-handed hitters and pitchers as my favorite players. The Dodgers were lucky enough to have one of each that made the Hall of Fame: Duke Snider and Sandy Koufax. While I collect both of them, Duke Snider is extremely more affordable to collect, so I have a much more impressive grouping of his cards.

Duke Snider’s rookie card appears in the 1949 Bowman set. It’s a beautiful card from a beautiful set: no text other than a name on the front, a nice headshot against a yellow background. Duke, who later earned the nickname of The Silver Fox due to his hair color, looks youthful and exuberant on this card, and the blue of his hat and jersey plays well against the bright colored background. From a pure design standpoint, this card is beautiful. I fell in love with it the first time I saw a reprint in the 1989 Bowman set. But because it’s a rookie card of a Hall of Fame player, it isn’t very affordable.

This August, I went to the National with the goal of obtaining a Duke Snider rookie card. I knew exactly what I wanted. I could afford a low-grade version of this card, one full of creases and rounded corners and stains. I didn’t want that. I wanted one that looks nice at first glance. I didn’t mind a few creases or soft corners as long as when I looked at the card the beauty of the design held true.

What I found available to me was utterly disappointing. I found some beautiful cards, nearly all of them graded by either PSA or SGC, and almost all of them high grades. These were simply out of the price range that I had set for myself. Lower graded cards were ugly looking, and I didn’t find any raw ungraded cards that fit my criteria of looking nice. I left without achieving my goal, hoping that perhaps I would find one the next time I went to the National.

A few weeks later, a PSA 1 graded version of the card popped up on Ebay. It was at the top of my price range, which I felt was steep for a card in that grade, but as soon as I saw the pictures I fell in love with it and knew I needed to have it. The front of this card is absolutely beautiful. The colors are vibrant, the centering on point. Judged on front alone, this looks like it could be a PSA 6 or 7 example. If you compare it to the PSA 10 photo earlier in this post, I think you will agree that it is nearly as nice.

The only issue with this card is on the back. This card was clearly glued to some kind of page, so there is some paper loss on the reverse. If ever there is a reason for a lower grade on a card, I much prefer it to be a problem with the back, which I don’t look at nearly as much as the front. I made the seller an offer, which he accepted. Plus, Ebay had a 20% off coupon code at the time. I walked away with my dream card at an accurate price for the numerical grade, but the card looks much better than the grade suggests.

It’s for this reason I advocate the “buy the card, not the grade” slogan. You can walk away with some incredible deals and be a very happy collector for a fraction of the price.