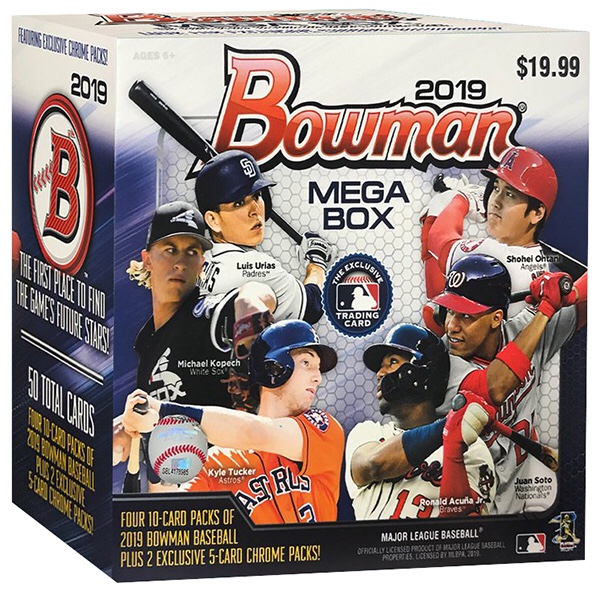 There seems to be no middle ground: people either love or hate Bowman Mega Boxes. But whichever camp you fall into, you have to admit that Topps continues to hit a home run with the product.

Bowman Mega Boxes were first introduced as a Target-exclusive product in 2017. The product was somewhat unexpected, and was shrouded in secrecy. Once the boxes started showing up at Target, they were gobbled up and, usually, resold at many times the suggested retail price of $14.99. The star of the boxes were the so-called “mojo refractor” Chrome packs — 2 packs with special Bowman Chrome refractors in them. There were also 5 regular packs of Bowman included, and it was several days before people figured out that these packs did not contain any parallels, inserts, or autographs. At the time, the product was buoyed primarily by Shohei Ohtani’s first Bowman card, and when the product dried up and stopped appearing at Target stores, the rumor was that Topps did not have a contract with Ohtani and had to pull the remaining boxes from the market. (This rumor was never confirmed.) Today, the boxes sell for between $80 and $90 each, with Ohtani’s card being joined by the likes of Ronald Acuña, Jr., Cody Bellinger, and Aaron Judge.

Last year, Topps released another iteration of the Mega Boxes. Just like in 2017, stock sold out at Target almost immediately, and prices spiked on the secondary market. In the time since, they’ve settled down, but they still sell for around $35 a box.

Last month when the 2019 Bowman Mega Boxes were released, it was clear they’d follow the same trajectory. They did: stock dried up at Target stores, and resellers were marking up the price double or triple the MSRP, which was increased from $14.99 to $19.99 for the first time in the product’s history. But an interesting thing happened for the first time: a second wave of Mega Boxes hit Target stores. Online, the Target website has restocked the boxes at least 6 or 7 different times, and each time the entire stock sells out in three minutes or less. It’s fairly clear that production this year has increased over the past two years, but the boxes are still selling out at Target, and still moving for about $30 a box on the secondary market. Which leads to the question: is there any point of over-saturation for Bowman Mega Boxes?

I’m of the opinion that there really isn’t. Mega Boxes are pumping a ton of money into Topps’s coffers, and also into the resale market. Even with increased production and enormous availability — as of this posting, nearly 400 listings for sealed boxes are available on eBay, most with more than 1 box — the product is still moving. I do think this has something to do with perceived scarcity; the product is only available at Target, and even in its third year, is still fairly shrouded in secrecy as far as actual release date and production run. But this alone can’t explain it; the Walmart-exclusive Topps Gallery line from the last few years doesn’t have nearly the success of the Bowman Mega Boxes.

A lot of it, then, clearly has to do with the potential of the product to increase over the next few years. With so many rookies in the product, it would be fairly easy to plop down $30 a box and stick it in the closet for a few years, hoping that Joey Bart or Wander Franco or another rookie becomes the next MVP candidate. Other boxes that are rookie-heavy, like Bowman, Bowman Chrome, and Bowman Draft, are well north of $150, which is more than most people would invest in something to leave unopened on a lark.

It’s clear that Topps has a winning formula with Bowman Mega Boxes. Although there’s a lot of cynicism around the folks buying these boxes to resell at a markup, there is still a market for the boxes when they do. As long as people keep buying from resellers, they’ll keep reselling them, and as long as the product stays hot, I wouldn’t expect Topps to mess around with it in any way, shape, or form.