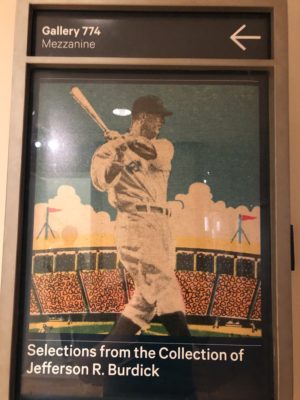 Last week while visiting New York City, I took a trip to the Metropolitan Museum of Art. The museum is obviously massive, holding countless treasures that a person could spend days wading through. While I loved every exhibit I spent time with, I was most excited to visit the Jefferson R. Burdick Collection.
Back in January, I named Burdick to the Mount Rushmore of Sports Card Industry Icons. As a refresher, Burdick is responsible for devising a system of cataloging early card issues, a system we still use today (T206, N28, W516, T3, and E90 are some examples of popular set designations derived from his system). Burdick also had an incredible collection that he donated to the museum before he passed away.
The vast majority of the collection, however, is under lock and key. Years ago folks could make appointments to view the collection, but as I understand it, there were some issues with theft attempts. Now it’s nearly impossible to view the entirety of the collection, even if someone is doing research. What you can see are what the museum refers to as “selections.”
After looking at countless Egyptian artifacts and a neat rock and roll exhibit, the baseball cards were next on our list. The collection is displayed on the Mezzanine floor nestled between the floors 1 and 2. Upon exiting the elevator, visitors are greeted with a sign pointing toward the collection.
I can only assume this sign exists because the collection is so difficult to find. The sign points to the left, leading visitors into a room filled with large glass cases containing paintings, wood furniture, and glass vases. The Mezzanine floor, unlike all other floors in the museum, is basically empty. Walking through the aisles of displays, there were no baseball cards in sight — and no one to ask for help. After wandering the large room for about ten minutes, I finally found what I came for. 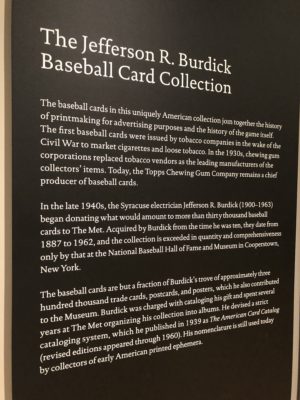 The selections from the Burdick collection are housed against a far wall of the room. Here I also encountered the only Met employee I had seen on the whole floor — a security guard standing near the cards. There are only 90-some cards displayed, and they are hanging on the wall in frames. Precious little information is given about the cards or the players on them. If you were not previously knowledgeable about baseball cards or baseball players, you would leave the exhibit no wiser. In fact, I did a good deal of explaining to a friend I was with, filling in the gaps that were left by a lack of information.
From a collector’s standpoint, the exhibit might be baffling if you didn’t know a bit about Burdick’s process and the history behind his donation. Burdick was a completist, and value did not matter to him. So, every card was meticulously pasted into albums, sometimes with notes written. Organization varied. 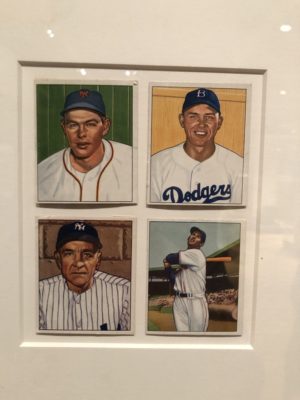 The most confusing one I saw was a display of four 1950 Bowman cards (referred to by the museum using Burdick’s designation of R406-4). The cards were of Ted Williams, Casey Stengel, Gil Hodges, and Clint Hartung. This combination is sort of baffling; the first two are Hall of Famers, and Hodges has a very strong case for the Hall and was thought of at the time as a future Hall of Famer. The cards are not in numerical order, so why the inclusion of Hartung, a pitcher with a career ERA of 5.02 and, following a switch to the outfield, a career batting average of .238? Of course I can’t know for sure, but I do have a theory. These four men represented each team in the area of the Met — the Red Sox, Yankees, Dodgers, and Giants. Burdick began his donation in 1947, at which point Hartung was a top prospect with a great amount of hype both on the mound and at the plate. So, the seemingly random grouping of players made some sense to me, but even to most collectors, it would have seemed odd without the background knowledge. The 1948 Bowman cards of Dutch Leonard, Willard Marshall, Joe Page, and Jack Lohrke were similarly confusing, but it occurred to me that all 4 cards were shortprints, a similarity likely leading to this grouping.
A wide array of cards were on display. Always a crowd pleaser, a frame full of T206 cards contained players only from Brooklyn and a few from the Chicago Cubs. These cards appeared in alphabetical order within each team and based on the team combination I can assume that he organized the teams alphabetically as well. 1959 Bazookas were not arranged linearly, but rather in a diamond fashion, and although the seven cards are grouped alphabetically on the checklist, Jim Davenport was out of place. An uncut sheet of 1941 Play Ball was pasted on a page and framed. 1935 Schutter-Johnson cards, including one of the Babe Ruths from the set, were neatly aligned, as were the beautiful and colorful 1933 DeLong cards, but the 1921 E220 caramels looked disheveled and haphazardly pasted on the album page despite being in alphabetical order. 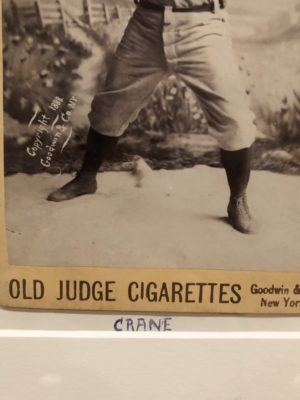 Beyond guessing the reasoning for the arrangements, it was fun to see Burdick’s desire for the collection to be a teaching tool. 1887 Old Judge cabinet cards appeared four in a frame. All four players were New York Giants, so the arrangement was easy to figure out. What was interesting was seeing Burdick’s hand-written “CRANE” below the only card without a name on the front. Without that notation, he likely feared no one would ever know that card was of Ed Crane. 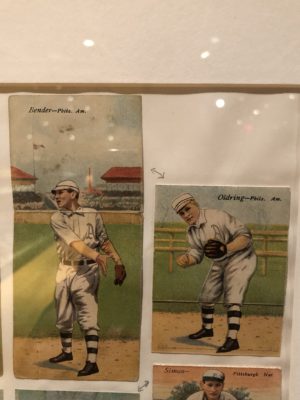 Likewise, the 1911 T201 Mecca Double Folder display was really neat. Burdick pasted two copies of each on the page — one in the open position, and the other in the closed position. Then he drew a double-headed arrow between the two, indicating that the two cards were one and the same.
Very interestingly, Burdick mounted a 1948-9 Leaf rookie card of Jackie Robinson on the same page as his 1956 Topps issue. I don’t know how frequently he did this, but it seems to me that most everything else was mounted by set and not player. It appears that even back then, number 42’s impact on the game was well-recognized.
The full Burdick collection has over 303,000 unique items across the sports and non-sports spectrum, and while it was a little sad that I only got to see less than 100 of them, the museum is doing a fantastic job of digitizing the entire contents of the collection for online viewing. You can do that at this link. If you find yourself in New York before August 11, 2019, these cards will still be on display; it’s my understanding that the museum rotated them out every six months or so, so even if you’ve been to the museum before, you can go back and see different cards. I highly recommend taking a trip to see a small part of the collection of one of the Mount Rushmore Icons. 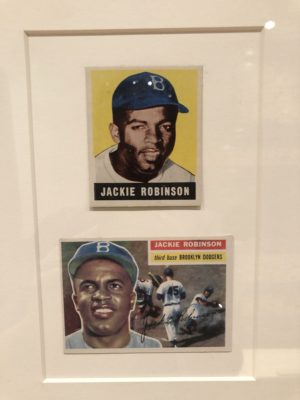