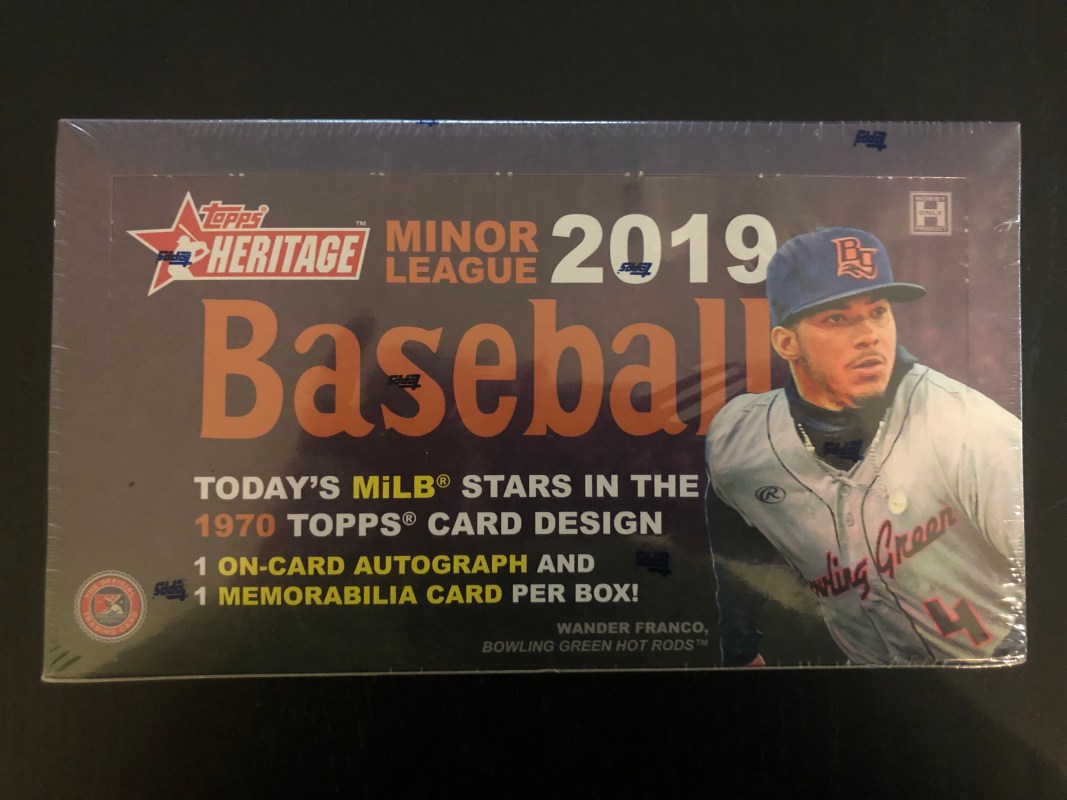 Each hobby box has 18 packs with eight cards each. You won’t get a complete 200-card base set out of one hobby box, but if you get good collation you very well may have a complete set from two boxes. Each box contains one on card autograph and one relic. While most relics are a Clubhouse Collection relic card, some contain patches or even the ever popular Mint cards with an embedded coin. Each box also comes with an oversized boxloader in the style of the 1970 Topps Super set. Mine was of Tigers top pitching prospect Casey Mize.

There are two new insert sets in the product: Fresh on the Scene and Fantastic Feats. These cards do a great job of maintaining the look and feel of a retro set inspired by 1970 Topps, even though they had no counterparts in the release five decades ago.

As stated earlier, the design of the cards mimic the year’s Topps Heritage set; this year’s design is based on 1970 Topps. There are plenty of parallels, including unnumbered Flip Stock and Photo Variation shortprints. I didn’t get any of these, but I did receive a blue border parallel #/99 of the MILB pitching leaders and a black border #/50 of Ali Sanchez. One nice thing about this set is that the parallels are in the middle of the pack, with the back side up for easy identification. No more having to squint at the codes on the bottom of the card! 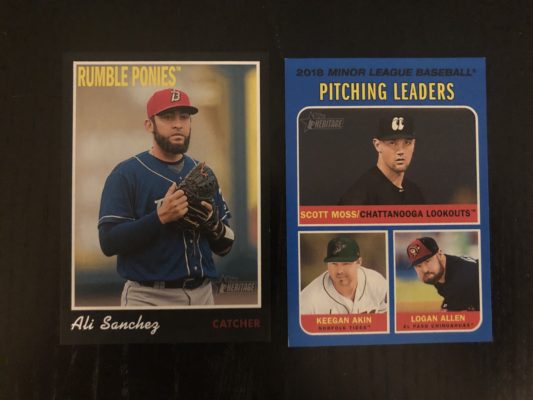 Shortprints come three per box and, in keeping with the tradition of Heritage sets, are found in the high numbers. In this set, cards #201-220 are high numbers. I received all three of my high numbers in successive packs towards the bottom of my box, so don’t get discouraged if you go a while before you pull one. Two of my three short prints were of former Florida Gators players, Jonathan India and Brady Singer, so that was very exciting for me. My other short print was of Christian Pache. 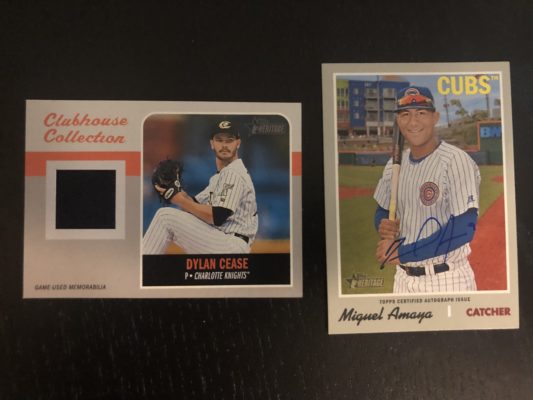 I got my relic card fairly early on in the box — a Clubhouse Collection card of Dylan Cease. Cease is a White Sox prospect who was acquired in the same trade that set Eloy Jimenez across town in exchange for Jose Quintana. Cease debuted in the majors this year, and while he struggled in his 73 innings, he was a year ahead of schedule and should have big things in his future.

I didn’t receive my autograph until my second to last pack. In keeping with the Chicago theme for my hits, my autograph was of Cubs prospect Miguel Amaya. Amaya is just 20 years old and while he’s struggled with his batting average in the minors, he has enough tools to be rated the Cubs’ #2 prospect by MLB Pipeline.

Suggested price for a hobby box is under $60 and it’s hard to go wrong with any box at that price, let alone a box that can provide minor league cards of future stars and guarantees two hits per box. These facts, along with my affinity for Heritage in general and a fairly easy to complete base set, are the reasons why I love this release each year. 2019 is no different.