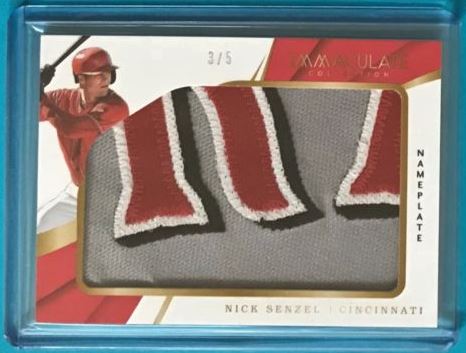 I’ll never forget my first relic card. It was the year 2000, and relic cards were still fairly rare and exciting. Ebay was small enough at the time that I used to literally search for “baseball cards” and view all of the results. One day, I found one seller with two cards at auction: Norm Hutchins and Bernie Williams bat cards from the 2000 Fleer Gamers Lumber set. I put in fairly low bids on them and I won them. When they game to my house, I couldn’t believe what I was holding in my hand: real pieces of game used bat!

I didn’t think much of it at the time, but how was I to know where these pieces of wood came from? I don’t think there was skepticism in the hobby until the mid-2000s, when relic cards began to flood the market and started to get uninteresting. This was made personal when I pulled a “game-worn jersey” relic of Mickey Mantle from 2006 Topps Allen and Ginter. My excitement died down after a few seconds when I realized I was looking at a snow-white square of jersey that definitely didn’t look to be used in a game, least of all a game from the 1950s or 1960s.

The real eye-opener in the hobby world came in 2010, when Topps admitted to using stadium seats and labeling them as bat pieces. This wasn’t prevalent, but did happen on some really important cards: Babe Ruth, Ty Cobb, Jackie Robinson, and Mickey Mantle. Was this commonplace? How would we ever be able to tell? In the years since, the market has suggested that many people share my skepticism, as prices for relic cards have fallen tremendously.

When I look around the hobby now, I see more troubling signs. Panini Immaculate, for example, is a high-end product with some beautiful jersey patches. Of what? I’m not sure. Take a look at the Rafael Devers “nameplate” and tell me what part of his name those letters represent. Ditto for the Shohei Ohtani nameplates that are all over ebay. Do a search for 2018 Immaculate nameplates and you’ll be shocked at what you find.

When Topps started including the MLB hologram sticker on its relics in Topps Strata products, I thought for sure this was the future. The hologram allows you to look up the game in which the jersey or bat was used. But this hasn’t really rolled out to other product lines or companies, and worse yet, the relics with the holograms are still worth very little on the secondary market. Where they are worth money, the value is similar to other relic cards without the hologram sticker.

Add to the mix the flood of manufactured relics, and I think there’s tremendous collector fatigue surrounding relic cards. They don’t generate any excitement, and the manufactured ones are basically as real as the ones that claim to be genuine.

Going forward, I’d like to see fewer relic cards in products. I’d prefer something else, even if it’s gimmicky (I love the pen caps included with autograph cards, because they’re something different!). Sketch cards have been a nice addition to products recently, for example. I’d even prefer extra 1/1s to relic cards (though I do admit there’s a collector fatigue around 1/1 cards as well). Based on how collectors react to relic cards nowadays, and how low sellers price them, I think we are at a point of no return in collector perception. Relic cards just aren’t exciting anymore.