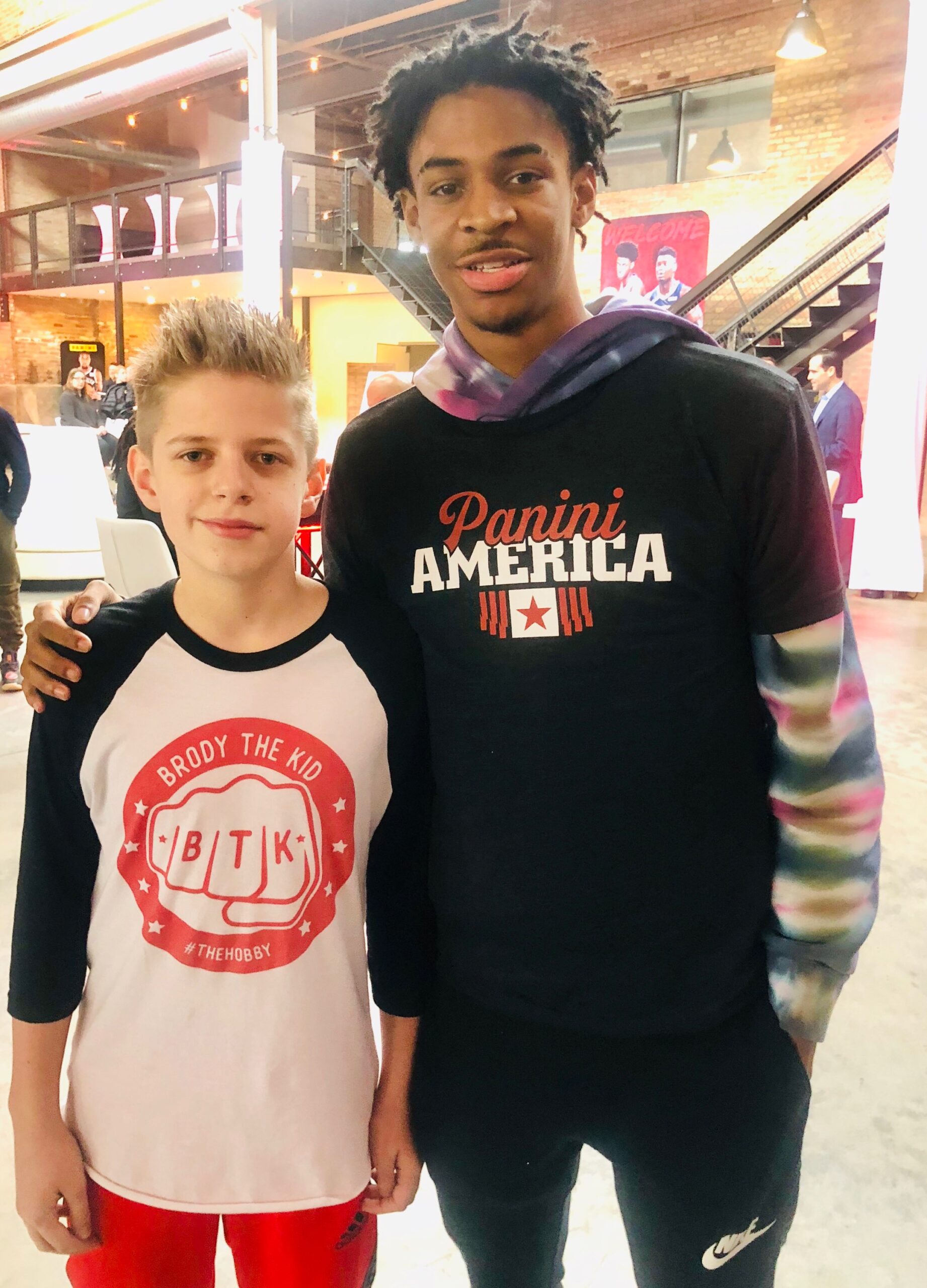 What is the up everyone? It is Brody the Kid here and welcome to this month’s edition of Riiip with Brody the Kid! We have a lot to talk about so let’s get going.

First of all, COVID-19 has suspended all sports and has had an effect all of us and unfortunately hurt a lot of people. I just want to make sure to let you all know to make sure you are washing your hands and staying safe. If you know anyone that is sick, please have them get tested if their doctor recommends and help them but be safe! Hopefully we all get through this soon and can get back to our normal lives.

To try and do something fun, I wanted to announce I am doing a free kids box break! I will be picking 6 kids on Twitter and/or Instagram and each kid will get a division out of a box of 2019 Topps Opening Day!! I will ship all the cards after I do the break, so kids and parents keep an eye on my social media to find out how you can win a spot! More details to be announced soon! 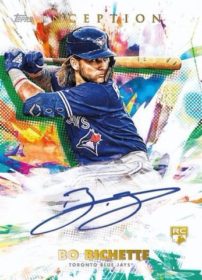 While things have been a little slow with everything going on, 2020 Topps Inception is out! These cards are very cool-looking with awesome artwork. You get 1 autograph per box and I think it is a very good product to get into breaks for, because you can hit some awesome cards for not too much money $! There are also some really sweet auto relics and silver signatures which are signed with silver ink on a black background. Make sure to check those out!

If you are looking for things to do while you are at home during the pandemic, I would like to suggest some awesome YouTubers to check out. Phil’s Pulls is the channel of former MLB pitcher Phil Hughes. If you haven’t checked him out yet, please do. His videos are really entertaining, and he does some awesome high-end breaks! Packer Cards 87 is another great one to check out. He has over 50K subscribers and does some sweet random hobby pack openings. He is also in the Buck City Breaks chats sometimes and does some breaks with BCB, along with 5-0 Cheddar Bob (his brother), who also has an awesome YouTube channel; they both are really fun watches. Jammin’ JD Sports Cards has some flashy music and does amazing pack battles with his wife, Tiny J. Another one to check out is Packman, who does some fun breaks and subscription boxes and more cool products. Also, Up North Collectors brings two generations of the hobby together. Lastly, check out Mike O, who does some awesome submission reveals and box breaks. There are a bunch more out there, but these are some of my favorites and can help fill some time for you if you need things to do in the near future.

Another cool thing that you can check out is some footage of when I went to the Panini NBA All-Star Weekend VIP Party. I was so lucky to get invited to the party. It was a lot of fun, with packs of cards on the tables, video games, pop-a-shot, ping pong, pool and a bunch of NBA legends and rookies, including Ja Morant, Rui Hachimura and Allen Iverson among them.  I even got to play video games with Ja! I was very thankful for being able to go.  Thank you again to Panini for allowing me to be there and thank you to all the players for being cool! Here is a link to check out what was there. https://youtu.be/ljUCP-SseE0

I would now like to welcome Max Mannis (@MannisCards on Twitter), a long-time “kid collector”! He is a huge Yankees fan and enjoys doing a lot of trades in the hobby.

How old were you when you started collecting and how old are you now?

I remember the first cards I owned being the 2009 Yankees team set, so I guess 2009 was when I first started collecting. I was 7 years old then. I started getting more into collecting, making trips to the card shop regularly and getting into autos and relics, when I was 12 or 13. I’m currently 18 years old.

How did you get into the hobby?

My mom and grandma bought me my first few packs of cards when I was around 7 years old. I collected a bit for a few years but got more into it again around 2014, and I started making deals on Twitter in 2015.

What are some ways that have changed how you collected when you were a younger kid until now?

When I was really young, I didn’t have a ton of money and mainly just collected cheap packs like Topps Attax and flagship sets. I didn’t buy a ton of singles, but when I did, they were usually cheap baseball autos or relics I could find. My “second wave” of collecting that started around 2014/2015 consisted more of me buying more boxes, and I started getting into collecting other sports. While I was still mainly a Yankees collector, I would start buying any cards I thought were cool looking or players I liked in football and basketball too. In recent years I’ve tried to condense my collection, selling and trading away lots of my non-Yankees stuff, including some of my Nets and Giants collections since I’ve gone back to really only collecting baseball. I don’t buy many packs anymore, and I collect mainly autos and relics of Yankees I like, especially current guys. I was super invested in my Didi Gregorius collection for a while and was heartbroken when he signed with the Phillies in December. I had nearly 100 Didi autos in my collection but have now started to sell and trade some of those to have more funds for cards of current Yankees, as well as to make some money to have when I go off to college this fall. I’ve learned to not “super-collect” any one specific player like I did with Didi, because they can always switch teams in the future, even if it may seem unlikely at a certain point in time. So right now, I’m mainly picking up cards I like of Yankees who I feel will be with the team for a long time, like Aaron Judge, Gleyber Torres and Gerrit Cole.

What is your favorite PC item in your collection? 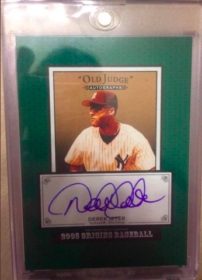 It’s hard to pick just one. I traded a Ronald Acuña Jr. Bowman’s Best auto for an Aaron Judge Five Star auto /5 a few weeks ago, so part of me is tempted to say that Judge is my favorite, though I do have three other Judge autos. But recency bias aside, if I had to pick any one card, it would probably be this Derek Jeter auto that I got in a trade at a card show a while back.

What have you seen change in the hobby since you started?

I’d say the main thing I’ve seen change is how many products companies are pumping out each year. Some people don’t like how many products are flooding the market since it can lead to more sticker autos and worse checklists, but as a collector who really only buys singles at this point, I don’t mind too much. I like being able to pick up autos of players from different products and display them all together.

I’d say that products that are geared towards kids, both in design and in price point, are a good way to start. Products like Topps Big League and even Opening Day that have cool looking designs and fun inserts can get kids hooked on collecting without having to shell out hundreds of dollars on a box to go fishing for autographs of big-name stars. I also think promotions like Panini does with the Super Bowl Kid Reporter are great. When it comes down to it, I think the more popular the sport is among kids, the more popular the card market of that sport will be among kids. We all know basketball and football are more popular among kids than baseball is right now, and I’ve seen that when I make trips to card shops and shows, those are often the sports I see kids buying packs and singles of. Specifically, when it comes to baseball, I’d say that Topps can do all they can to appeal to kids, but a large part of it is in MLB’s hands to market to the younger audience more. If MLB can popularize baseball among kids, especially by marketing individual players like Mike Trout, Aaron Judge, Cody Bellinger and Ronald Acuña Jr., kids will turn to card collecting as a way to connect to the players and game they love.

I see you post a lot about trades you make; do you have any advice for kids who want to try and trade more cards online?

Making a list of all the things you collect, your “personal collection” (or “PC”) and putting it in your bio or your pinned tweet is an easy way for people to find what you collect and keep you in mind if they want to work a deal. Beyond that, it’s pretty simple- just post pictures of cards you have for trade or reply to other collectors if they have cards you like. I put my mom’s name on the address I sent to people I worked deals with for many years, and I think using a parent’s name is definitely a smart idea, just privacy-wise. When it comes to protecting yourself from scammers, I’d say that scammers truly do come far and few between, and there are far more good trade partners than people looking to scam you in the card community, at least on Twitter. But to be extra careful, asking a person you’re trading with for “vouches” of people they have done deals with before is a good way to make sure you’re not trading with someone who won’t follow through on their end of the trade. Lastly, I’d say to always post your maildays when you get cards in from other people, because it shows that you’re grateful to them for working the deal. It also allows you to show people what you collect and that you want to make trades, as well as showing that you’re trustworthy and will follow through on trades.

Thank you, Max! It really meant a lot for you to take the time to do this, and I appreciate it! I loved learning about your collection and the advice for kids was awesome! Kids, let Max and me know what you collect. Hit me up on my Twitter with your PC and I will pick one winner for a BTK prize pack.

And thank you to all of you for reading this month’s Riiip with Brody the Kid! Please stay safe out there and make sure you are washing your hands!