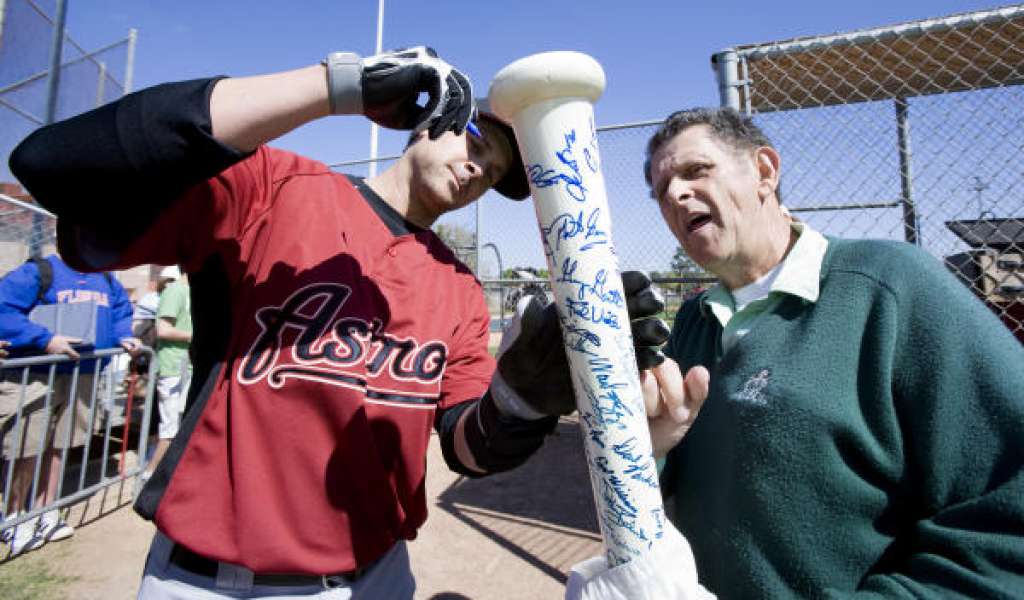 If you ever came to a Friday night trade night at Big League, there’s no doubt you encountered Vito Giordano. Always full of excitement and eager to buy cards of his favorite player, Vito would greet any newcomer with the same line in his thick Brooklynese accent: “You got any Jeter cards?”

Sadly, we learned on Monday that Vito passed away at the age of 83.

It’s amazing how much you can learn about a person just through interactions at a baseball card shop. You could find out a lot about Vito pretty quickly when you first met him. In addition to telling you that his favorite player was Derek Jeter, you’d also learn that he had a dog named Jeter and a vanity “JETER SS” license plate. He’d also probably tell you that he had the chance to get Derek Jeter’s signature on what he called “my bat” back in 1992 for $8, but turned it down because he was an unproven prospect. For the uninitiated, Vito’s bat was a gigantic oversized baseball bat, painted white, upon which he obtained hundreds of signatures from baseball players that spanned his lifespan. If you ever mentioned a player Vito had the fortune of meeting, he’d chime in with, “I have him on my bat!” Then he’d recall the glory days of baseball card shows, when autographs for stars like Mickey Mantle and Willie Mays cost just $20 a pop and there was no line to get them.

It wasn’t too long after I met Vito that he told me he was from Brooklyn. “No!” I exclaimed, feigning shock at having no idea of his origins despite his heavily-accented speech. I learned he lived in Sheepshead Bay, a dozen or so blocks from my grandmother who lived on Avenue J around the same time. When he’d talk about Brooklyn, Vito’s eyes would light up as the memories of his childhood came flooding back. “I used to play ball with Sandy Koufax,” or “We’d see Phil Rizzuto around all the time!” were some of his favorite ways to start stories.

Vito also used to love to talk about watching the Dodgers and Giants and, of course, his beloved Yankees as a kid. He made sure you knew that if Mickey Mantle had played anywhere besides Yankee Stadium, he would have hit 700 home runs. He’d talk about times that he and his friends would get autographs through the fence or sneak peeks at the game without paying to go in. But his passion for the Yankees didn’t end with his childhood or even when Derek Jeter retired; he followed the Yankees religiously, complaining about how often Gary Sanchez strikes out and raving about his preference for Gio Urshela’s defense over Miguel Andujar’s bat. He’d also watch the “local” team, the Tampa Bay Rays, and would often ask if anyone had watched the game the night before in order to discuss something he’d seen, or a strategy that he didn’t care for, or to lament that the Yankees didn’t have a player the Rays had.

His stories spanned not just baseball, but his own life, too. We would hear about the time Denny McLain showed him a curse-word-filled autograph about Mickey Mantle or about Hank Bauer’s feelings about America’s adversaries in World War II, sure. We’d also hear about how he loved to visit the old Ted Williams Museum before it got moved to the Tampa Bay Rays stadium, and how he and his son had an inscribed brick there but he never found out what they did with the bricks when they moved the museum. He’d tell us the story of how he and his friends went to Coney Island and they all got tattoos (his said “William,” his middle name), or about the time Katharine Hepburn asked him to put some water in her glass. (“Oh, boy!” she would exclaim in the story. “Could you fill my water glass?” Vito would reply, “Right away, Mrs. Hepburn,” then realize the cup was filled with vodka, return the cup to her, and say “Please, Mrs. Hepburn, don’t hurt the fish!”) If you were planning on visiting New York City, Vito always had one piece of advice: “Do you like Italian food? Go to Carmine’s!” He also made sure we knew whenever Albertsons had a sale on shrimp — and how disappointed he was that the Albertsons location he frequented became a Safeway and, later, another Publix.

His jokes became so overused that the humor in them was not in the punchline but rather in the joy Vito had when saying them. “Pizza man is here!” he would exclaim when someone walked through the door with a large box of baseball cards. If that person was holding several things with both hands, he’d ask him, “Can you hold this for me?” without trying to give him anything to hold. “My doctor always tells me, don’t eat nothin’ that tastes good!” he’d say to you while eating a small slice of pizza or a Little Debbie snack cake, careful not to overindulge so as to still be able to enjoy his wife’s cooking, which he always raved about. When paying for a card he bought, Vito would ask, “Do you have change?” If you didn’t, he’d hit you with his classic reply: “You don’t have change of underwear?” The joke never made a whole lot of sense, but that was sort of the beauty of it, seeing an octogenarian get such a kick out of a simple one-liner we’d all heard many times before. I’d love to hear him crack that joke and see his smile afterwards one more time.

Vito will be sorely missed by everyone who knew him. Big League won’t be the same without his booming voice, thick head of hair, and gregarious personality.