Riiip with Brody the Kid

What’s up everyone, it’s Brody The Kid here back with another edition of Riiip. There has been a lot of news lately so let’s go right to it!

The Mint Collective was crazy out in Las Vegas!! There were a lot of people down there for this crazy event. Fanatics had a huge role in this with Josh Luber doing a speech on the main stage. The hobby is going to be changing a lot in the future with things like direct to consumer, changing the packaging and more. 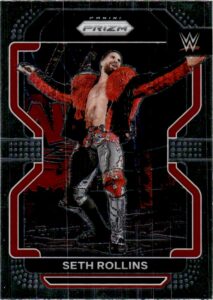 Panini Prizm Wrestling is here, and Panini struck gold with it as their first WWE product! It will be the same configuration as UFC Prizm with 12 packs, 12 cards per pack and 2 autographs! They started out at $750 a box but has since increased, and this has been one of the most hyped up and expensive WWE releases of all time. Singles on the secondary market have been going wild!

Speaking of WWE, Fanatics has purchased the rights to WWE! This is interesting news after Topps had just lost the license to Panini. There are a few things that could happen here that would make this work with Panini making products… Fanatics could be purchasing Panini in the future or Panini will not have this license for very long. It’ll be interesting to see what happens!!

Drake and Ken Goldin did a huge break all night long!! They ripped a box of 86-87 fleer to start and pulled 3 Jordan rookies and 3 Jordan stickers! Think about this for a second, that was the first box or pack of cards Drake had ever opened! Logan Paul called in as well and shot the viewers up to 20,000! This was awesome seeing someone as big as Drake chilling with one of the smartest people in The Hobby.

MLB is here!! I’m so excited for this season, I can’t wait for the year to play out. These are my predictions for Cy Young, ROTY and MVP. And I’ll tell you a card that you need to own of each player.

AL Cy Young- Dylan Cease- Dylan Cease had a solid year last year with about a 4.00 era but a little bit of a high WHIP. So why Cy Young? Cease is a strikeout machine, and with work on accuracy of his pitches, he will become a star. 2020 Topps Chrome Rookie Auto

AL MVP- Mike Trout- Mike Trout is Mike Trout. I don’t think I need to explain anything else.

I would collect every single card Mike has 😂. 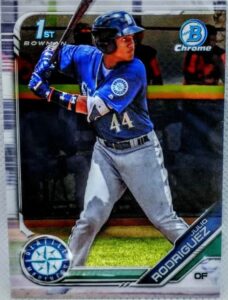 AL ROTY- Julio Rodriguez- Julio Rodriguez is a stud. Bobby Witt, Jr is a stud. I went with Julio on this one just because of the home runs we have seen him hit. Bobby has had some awesome homers as well, so this is a very hard pick. I think either could win it and there could be sneakers included as well throughout the race. 2019 Bowman Chrome

NL Cy Young- Logan Webb- Logan Webb is very talented like we talk about in the power rankings, and I think Peralta could fight for this but Webb just seems to be in a great place in San Fran.  2020 Topps RC 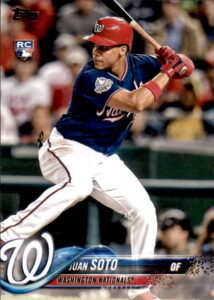 NL MVP- Juan Soto- Juan Soto finished 3rd last year in the MVP voting but this kid is getting better and better every day. He is ready to add this award to his World Series ring. 2018 Topps Update base 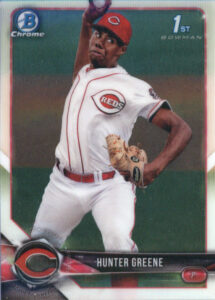 NL ROTY- Hunter Greene – Hunter Greene is back from injury and finally ready to throw GAS. This kid can throw it into 3 digits with nasty off-speed mixed in, so I’m stoked to see him in the majors. 2018 Bowman Chrome Prospects

There you have it for my picks! Who do you have winning the awards? While we’re talking MLB, let’s do my top 5 teams and a guy from each team that I think is going to have a breakout year!

There we go! I’m so excited for the baseball season and for more lists that I will do in future blogs!

That’s it for this month everybody! Let me know who your picks are for this year?

See you at the next Riiip!

Have a question? E-mail me at brodythekid1@gmail.com