Long-time collectors know that sports cards have historically not been a very mainstream cultural touchpoint. Collecting comic books has always had a more direct line to general pop culture, because superhero movies have existed in the public consciousness for decades. For years, I didn’t really see sports card collecting represented anywhere outside of the hobby; as a kid, it always surprised me that even during the hundreds of baseball games I watched and attended, there wasn’t so much as a Topps advertisement or product placement in a program or during a break or on the outfield wall.

But over the last few years, sports cards have crept into the public consciousness. Players like Pet Neshek and Phil Hughes brought greater visibility to the hobby by collecting. Then when Covid started in 2020, DJ Steve Aoki began collecting in a very public way. Superstars like Snoop Dogg and Rob Kardashian were tied to cards. All the while, influencer Gary Vaynerchuk was hyping cards as a fun and worthwhile investment.

The latest entry to the sports card celebrity market is Drake. One of the best-selling music artists in the world, Drake popped on the radar in March with a big splash. Before anyone even know he was collecting, the hip-hop artist posted a story on Instagram about opening 14 boxes of NBA Flawless, valued at over $200,000. Drake specifically noted that he was hunting for a Triple Logoman Patch card. News outlets picked this up as a story and suddenly people were abuzz about Drake buying basketball cards. 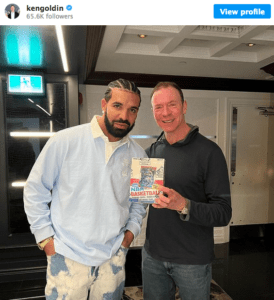 The former Degrassi actor wasn’t done yet, though. Less than two weeks later, Drake and Goldin Auctions founder Ken Goldin opened a box of 1986 Fleer Basketball live on Instagram before opening another 10 boxes of Flawless. In his first pack of 1986 Fleer, Drake pulled a Michael Jordan rookie card. That was just the tip of the iceberg, as the box eventually yielded 3 Jordan rookies and 3 Jordan stickers, just about the best you could possibly hope for in opening a box of the 36-year-old product.

Drake’s highly-publicized involvement in the hobby is likely only the latest in what will continue to be a parade of high-profile celebrity investors and collectors. The hobby still has much room to grow, and connecting with people who have not historically been collectors is important for that growth. There’s no better tool to do this than seeing very famous people spend a lot of money on cards.