In honor of today, the 75th anniversary of his MLB debut, collectors may want cards from the beginning of Jackie Robinson‘s groundbreaking career. There is no shortage of options, though many of them require a collector to have deep pockets.

The card most commonly thought of as Robinson‘s rookie is his 1948 Leaf issue. This card has risen so dramatically in price over the last few years that it is out of reach for most collectors. With no Topps card issued until 1952, many collectors turn instead to Robinson‘s first Bowman issue from 1949. The vivid red background is attractive, but there is no denying that this card comes from Robinson’s third season in the major leagues. (It’s also worth noting that contemporary thinking believes that the 1948 Leaf issue was actually, in fact, released in 1949 as well.)

The 1948 Leaf and 1949 Bowman issues are, amazingly, not all that rare. The PSA population report for the iconic 1948 Leaf rookie card shows a total of 1578 graded. Similarly, the 1949 Bowman report shows 1567 copies have been graded by PSA. There are other significant cards besides these two popular issues that represent this period in Robinson‘s career while also being much more difficult to find. Some are even cheaper in comparison to the Leaf and Bowman cards, even though there are fewer of them available.

The only “major” release that occurred in Jackie’s rookie year of 1947 was Bond Bread. The 48-card set included Robinson, and technically this would be his first rookie card. With virtually no sets issued during World War II and very few before the 1948 season, this set is truly a gem and also includes a rookie of Yogi Berra. There are just 117 copies of this card graded by PSA. There is also another set of Bond Bread cards comprised solely of Jackie Robinson that is also frequently attributed to 1947, but many people think that at least half of the cards in the set were issued after 1948, as some photos are from the 1949 season. 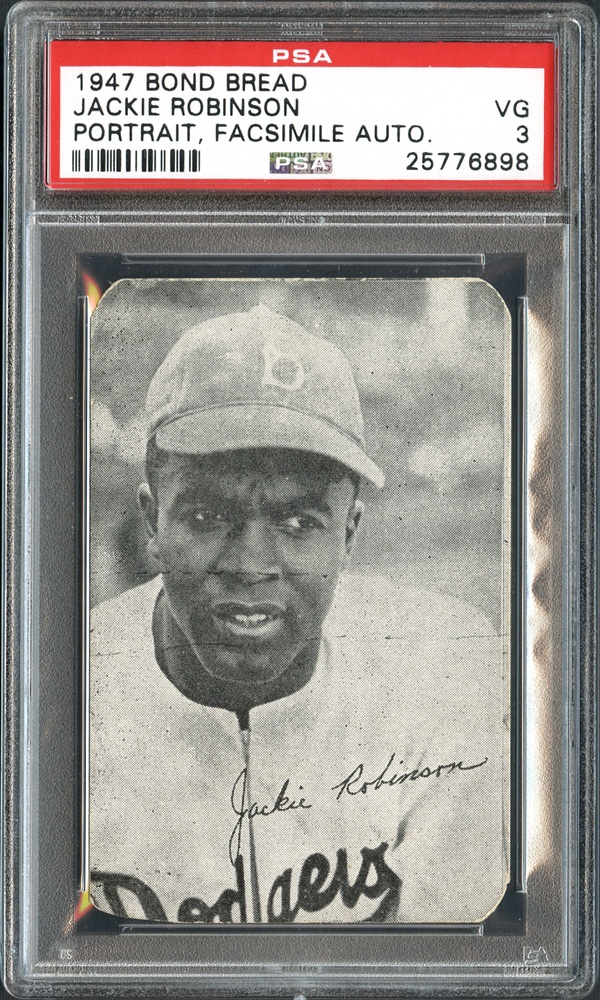 An interesting release from 1948 is the R346 Blue Tint issue. Amazingly, the manufacturer and method of distribution for these blank-backed paper strip cards has never been determined. Because they are flimsy and were hand cut, most examples are lower grade. It has an incredibly low PSA population, with just 49 cards graded. 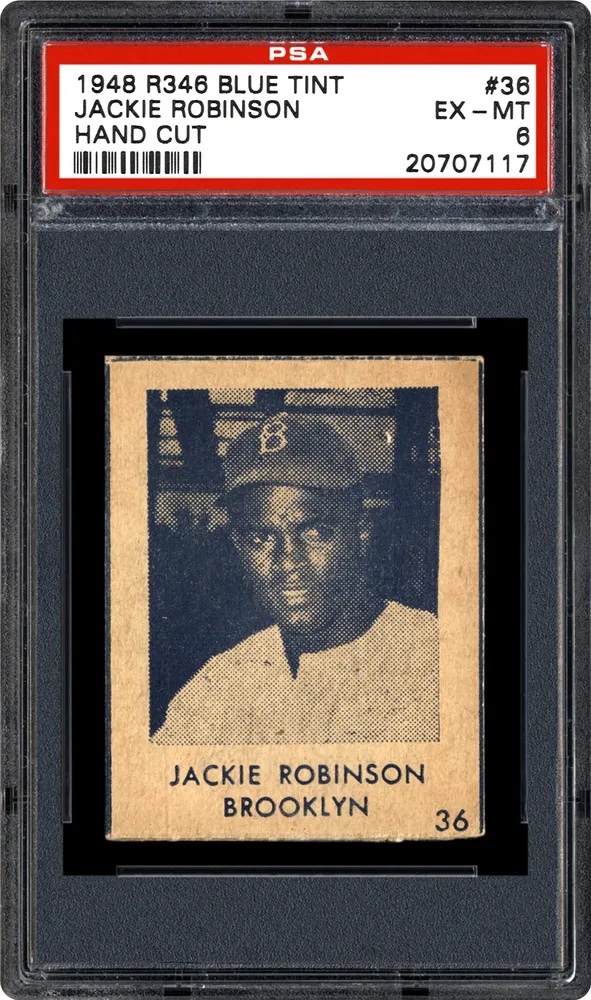 My personal favorite from this era is the 1948 Swell Sport Thrills issue. A 20 card set that also features players like Babe Ruth and Lou Gehrig, the black-and-white issue included an early card of Jackie Robinson commemorating his debut. I particularly like this card because the back contains a lengthy write up about Robinson‘s historic debut. I also like it because it is quite rare. There are just 183 copies graded by PSA, a small amount compared to the two major cards often seen as his rookies. 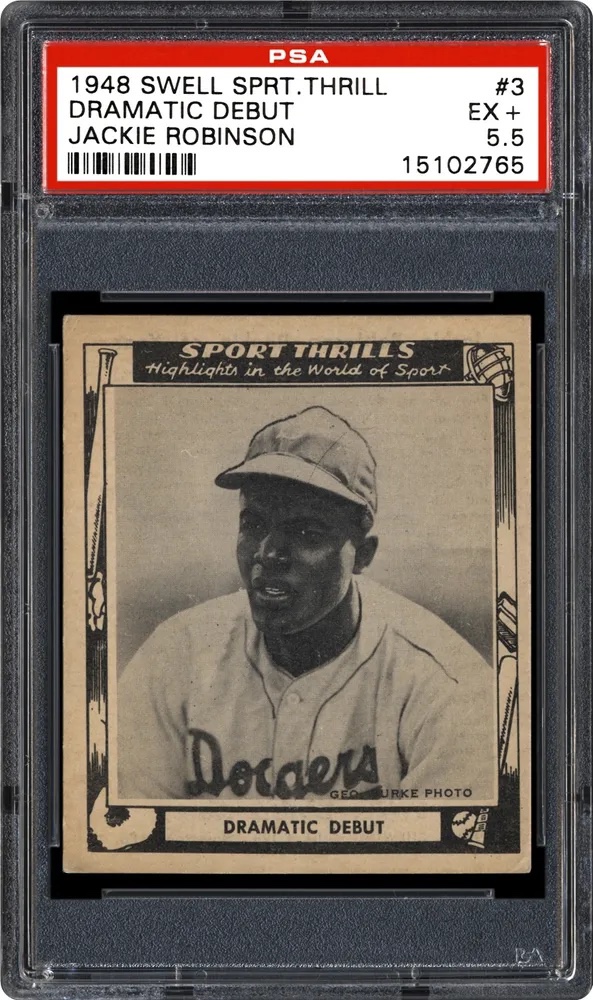 Since both the Leaf and Bowman issues are technically from 1949, it’s worth exploring one of my favorite obscure releases in the entire baseball catalog. I’ve written before about this set, a National League-only release that used color photography four years before any card manufacturer was doing so. Jackie has a card — well, stamp — in this release as well, and it’s refreshing to see a color photograph of him when other releases used either black and white photography (Bond Bread, Swell, R346 Blue Tint) or artist renderings (Bowman, Leaf). To make things more interesting, the Eureka stamp has the lowest PSA population of any issue mentioned here. As of this writing, PSA has graded a perfect 42 copies. 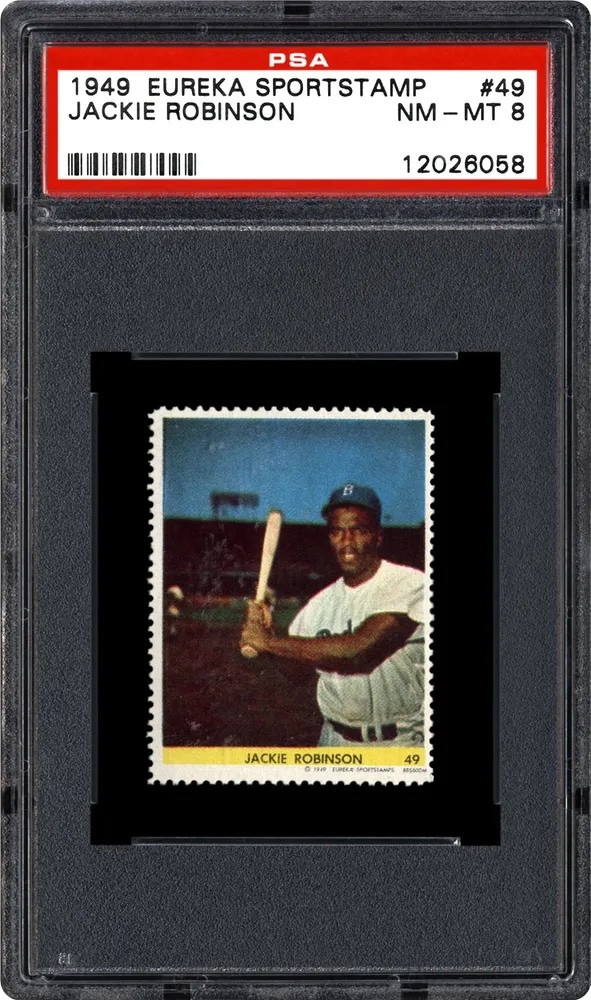