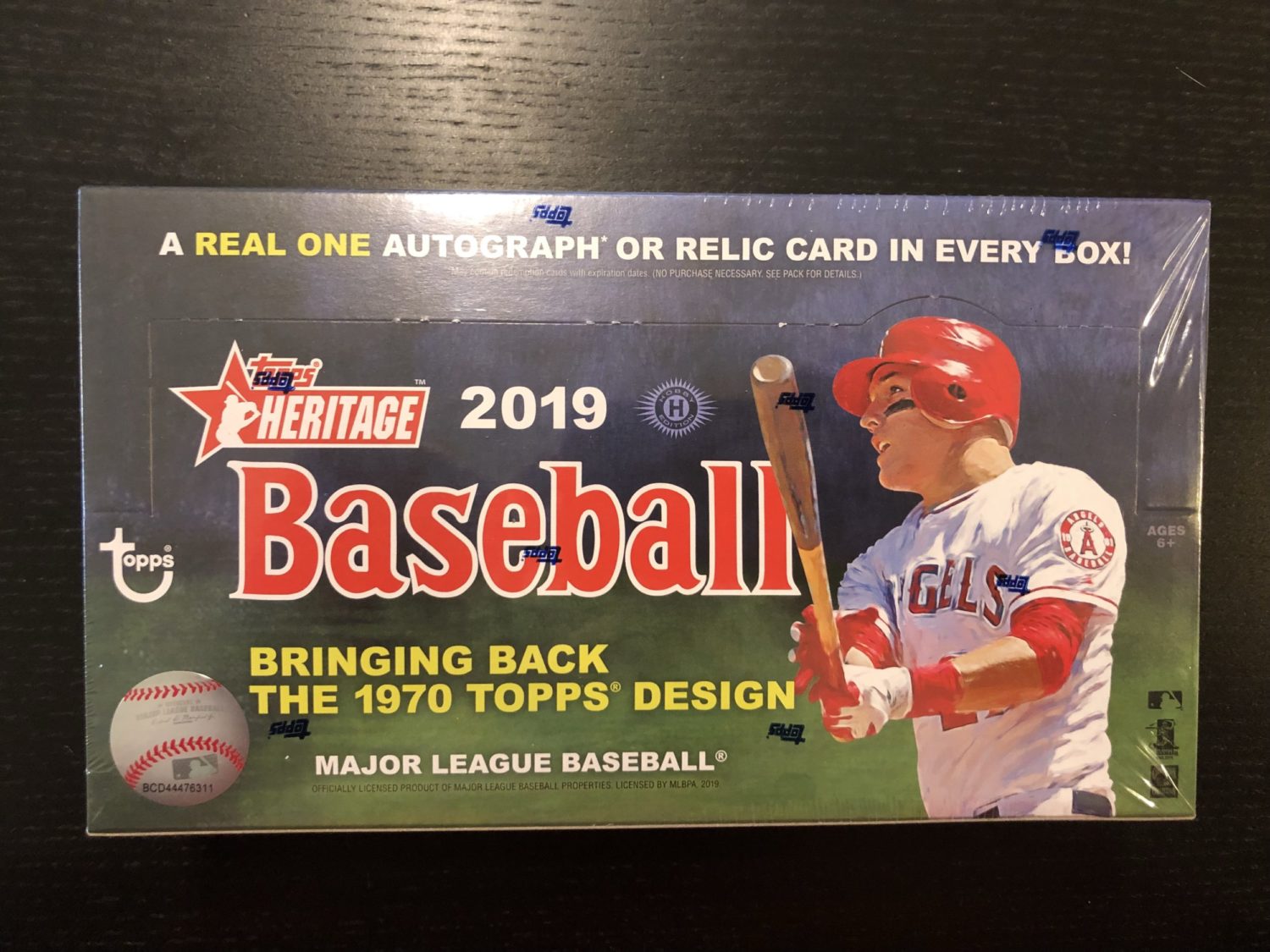 One of the most popular sets each year, 2019 Topps Heritage hit shelves at the end of February. I thought that last year’s release was one of the best in the product line’s history. The 1969 design was sleek and clean, and secondary market values and collector sentiment seem to support my opinion. I know two collectors who both put together last year’s set, and neither had built a set of any release in over a decade.

Why am I talking about last year‘s edition in a review about this year’s product? Quite simply, because the 2019 release blows the 2018 version out of the water. Everything I thought was great last year is even better this year.

Topps sent me a hobby box to review, and the product did not disappoint. I had seen some great mockups prior to release, and plenty of hits in the days following release, but having these cards in hand takes it to another level.

Each hobby box contains one box topper, which is either a buyback 1970 card or a 1970 Topps Super-style card. I got a buyback of Yankee Steve Hamilton. The Super cards are beautiful and, when I saw one at my local card shop, I thought it was actually a 1970 card from afar. The main difference is that the new issue isn’t on the thick stock that the original version came on.

The base card design is dead on. Somehow, Topps has captured the essence of the 1970 set while still maintaining a modern feel. In some of the early years of Heritage I felt that the fonts were slightly but noticeably different. That is no longer the case, and putting these cards side-by-side with the original release is a perfect match. Another really cool touch is an homage to specific 1970 Topps cards. I’m not sure if more than one exists, but the one that instantly jumped out at me was the Pat Neshek card, featuring the Phillies reliever wearing sunglasses in the same way Lowell Palmer appeared on his 1970 card.

High number short prints, always the bane of any set collector’s existence, return to the set at a rate of one in every three packs, so I got 8 in my 24 pack box. There are some great names included in the high numbers, like Buster Posey and Miguel Cabrera.

Though the 1970 set is not known for errors and variations, Topps Heritage is, and therefore they’ve made their way into the set. I didn’t get any in my box, but possible variations include Errors, Action Image, Team Name Color, Traded, Nickname, and Throwback Uniform.

Chrome cards are also a favorite of Heritage collectors. While I didn’t get any refractors, I did get a Chrome parallel of Max Muncy numbered to 999. There are also black border parallels, like the Jeff Gyorko I received. These are limited to just 50 copies, but strangely enough, are not numbered. I think it would be cool in the future to have numbering on these cards. Of course, next year a black border won’t work with the 1971 issue. Maybe they’ll have a white border instead.

Each hobby box contains one relic card or the popular Real One autographs. I was lucky enough to receive the latter, an on card signature of Phillies slugger Rhys Hoskins. The lack of sticker autographs is always one of the high points of this product.

Heritage also has its own traditions that it must keep. New Age Performers and Then and Now cards are stalwarts of the brand, appearing in every issue since its inception in 2001, while Flashbacks is the newcomer of the bunch, having joined the brand in 2003. What really impressed me this year was how seamlessly the inserts seemed to flow with the 1970s style design. In years past these felt like unique insert sets that had no real tie-in to the rest of the set. This year, however, when I pulled Then and Now card of Lou Brock and Whit Merrifield, I actually had to look on the back to see if it was part of the base set or an insert set like usual. The design is that good.

Another awesome Insert is the Scratch Off homage to the 1970 set. This is another perfect replica of the original. The Scratch Off set appeared in both 1970 and 1971. The only difference was the color around the boxes on the inside; 1970 was white, and 1971 was red. Topps was accurate with the white this year, leading me to wonder if there will be a red version in next year’s release.

I am by no means a Heritage fanatic. I have never attempted to put together a complete set and while I typically purchase one or two boxes every year, I rarely purchase singles unless they somehow dovetail with another one of my collections. But after last year’s successful release and this year’s strong follow-up, Heritage may well be turning into my favorite release of the year.