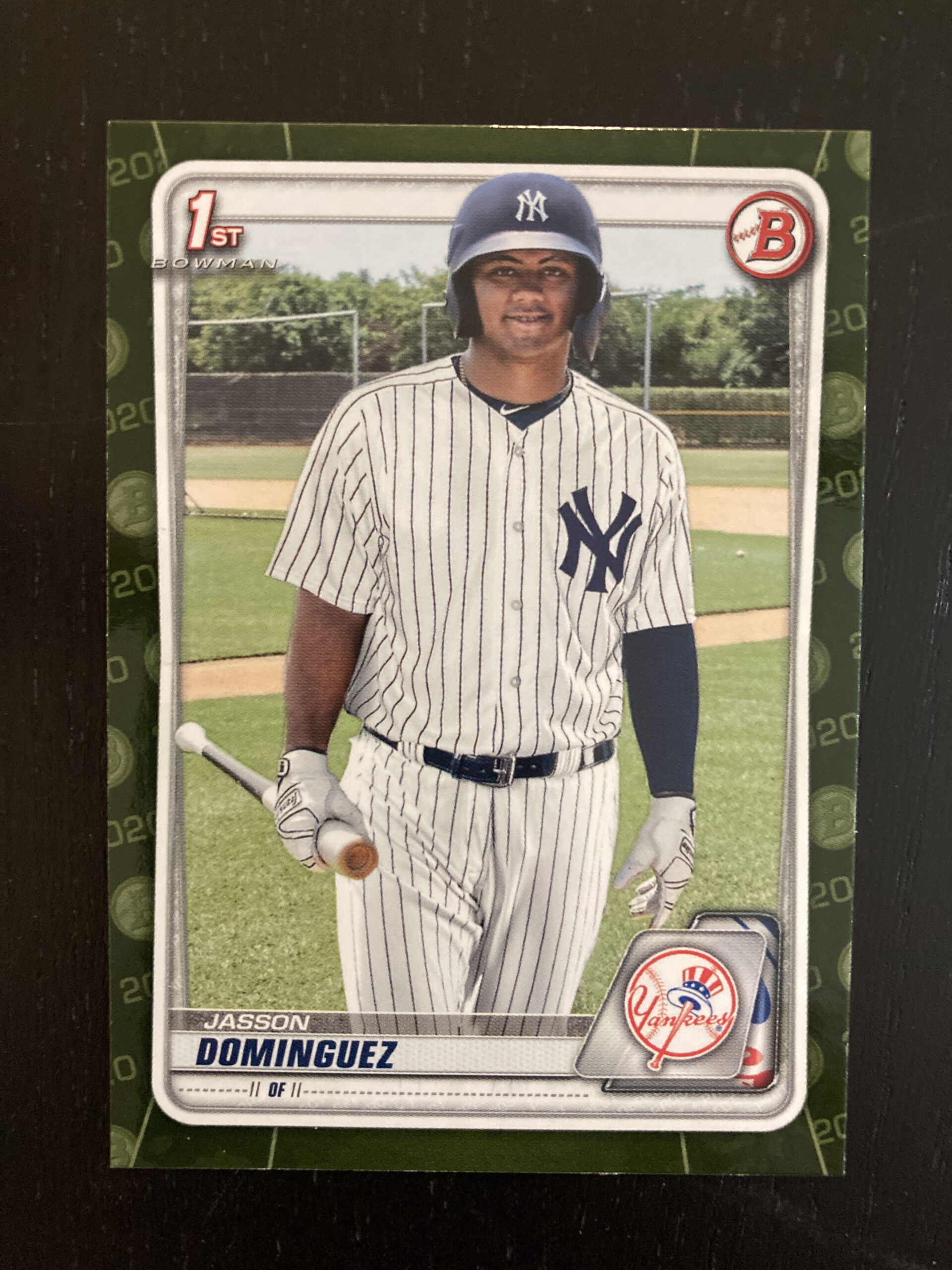 In 1998 I bought my first ever packs of Bowman. I tried (and failed) to put the set together, but I fell in love with this idea of a set that fused established major leaguers with up-and-coming prospects. I bought Bowman by the pack every year until 2005, when I started buying a box instead. By 2010, I was buying 4 boxes a year, and by 2016, I was buying a case.

By 2018, fueled by the hype surrounding Aaron Judge’s cards the previous year and the explosion of the online box breaking market, prices for Bowman were astronomical. I couldn’t afford a case, nor could I justify the cost, so I went back to buying boxes. Last year, prices were so high I couldn’t even touch a single box, and instead settled for retail blasters. It seemed that that would be my new way forward.

Only this year, blaster boxes became impossible to find, too. I had the foresight to preorder 20 blasters from Walmart back in March. Bowman’s release got pushed back from April to May, and Walmart held my preorder through the release date, when I got an email saying my order was delayed. A few days later I, along with a slew of other preorderers, got cancellation emails. I was devastated. By this time blaster boxes for selling for upwards of $40 on eBay. Would this be the first year in more than two decades I didn’t open Bowman?

Fortunately, retail “Value Packs” came to my aid. Value packs contain two packs of Bowman plus a special 5-card pack of Camo parallels. I had preordered 20 value packs from Walmart at the same time I ordered the blasters and they did NOT get canceled — just severely delayed, and shipped in multiple shipments that didn’t make sense (on one day I got separate boxes with 5, 3, and 2 value packs, then two days later I got separate boxes with 6, 3, and 1 to complete my order of 20). I was able to grab another 20 value packs from Target online as well.

40 value packs with 2 packs each means I opened 80 retail packs total. At 12 cards per retail pack, that’s 960 cards — or exactly the same number of cards as I’d have received from 4 hobby boxes, each of which has 24 packs with 10 cards each. My total investment for my 80 retail packs was about $400, which wouldn’t even come close to buying me 2 hobby boxes, let alone 4. Plus, I got 40 packs of retail-exclusive Camo parallels.

That does seem like a deal on the surface, and it sure felt like one to me, but it’s important to keep in mind that hobby and retail packs are not the same. They don’t have nearly the same odds of getting big pulls, and they have different parallels exclusive to each of them. Chrome autographs, for example, come 1 per hobby box. I got one Chrome autograph and one paper autograph (a retail exclusive) in my packs. The paper was of top Tigers prospect Matt Manning, while the Chrome was a green shimmer refractor of Rangers farmhand Sherten Apostel. 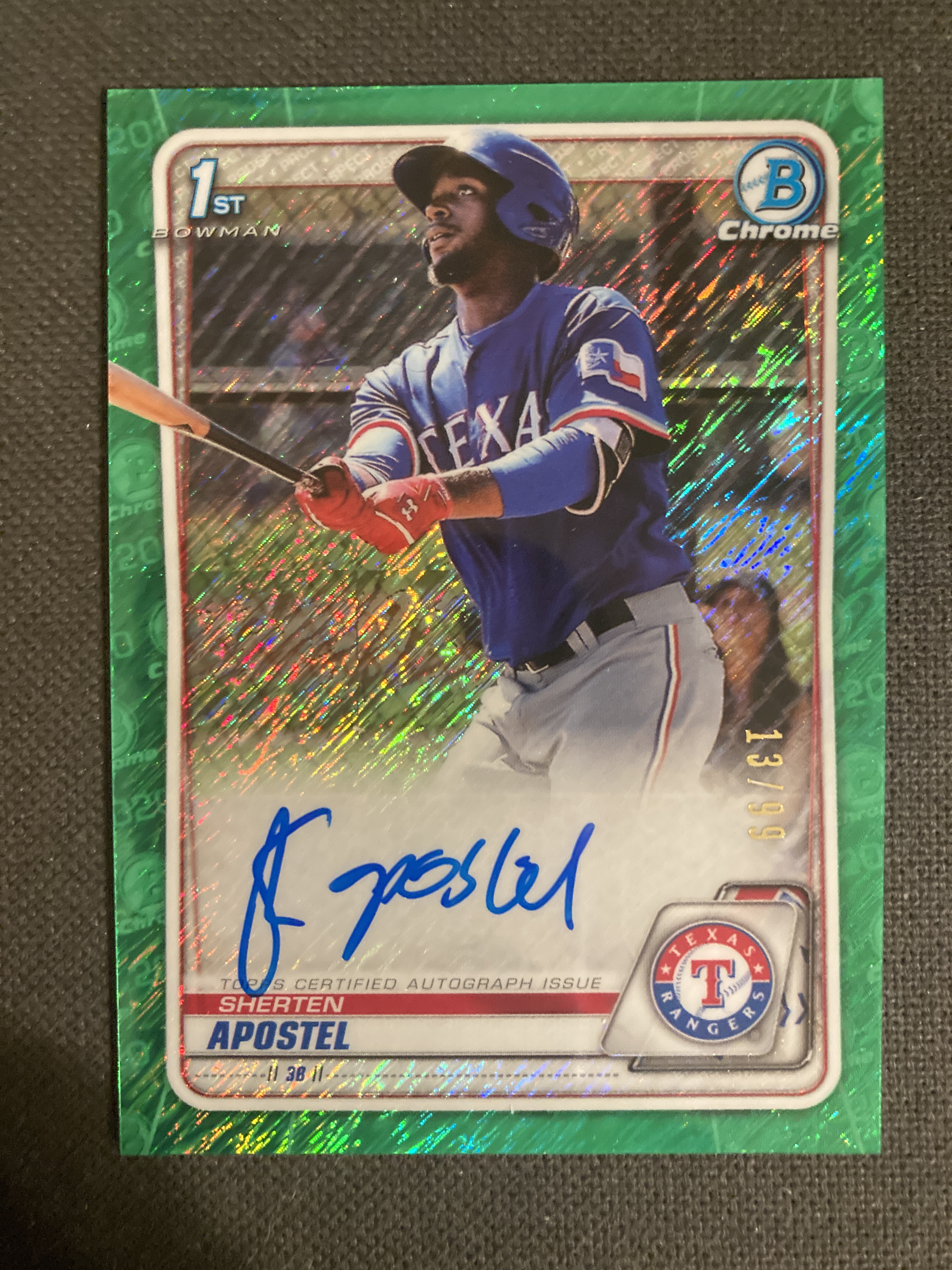 Across all of my packs, my biggest hits were actually not autographs at all. I hit not one, but two, red refractors of Jo Adell, one of the top prospects in the game. One was of Adell’s base card, while the other was of the 1990-style insert. Both were serially numbered to just 5 copies. I also received a good amount of “color” though mine were mostly paper border variations rather than Chrome refractors. The best of these had been a green Mike Trout #/99, until I had a much bigger hit shortly thereafter — a platinum 1/1 parallel of Nationals minor leaguer Luis Garcia. 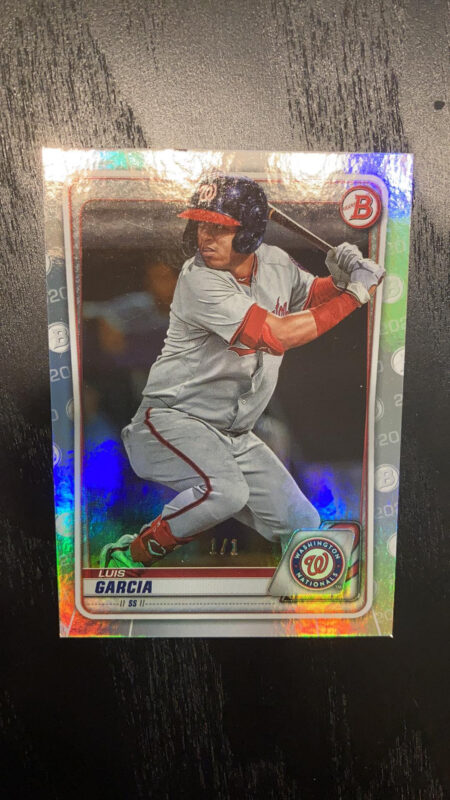 Collation was interesting, though that was likely at least partially impacted by my receiving 4 different shipments of packs. Across 80 different packs I did not receive a single base or Chrome card of Bobby Witt, Jr., one of the top prospects in this year’s product. I did, however, receive 3 Chrome and 4 base of Robert Puason, another top prospect. Jasson Dominguez, the breakout star of 2020 Bowman, was even more interesting: I received only 1 base and 2 Chrome, but 2 Camo, 2 Top 100 Prospects inserts, and 3 Spanning the Globe Inserts. For the veterans and rookies set, I was only able to make 3 complete 100-card sets, though I had 8 or 9 copies of certain cards. Such is the danger of acquiring packs individually from different sources.

From a product standpoint, Bowman just keeps cranking out successful releases one after the other. Last year I noted the strength of the card design; this year is no different, with a simple, straightforward design that draws attention to the player’s photo. Going with value packs was a great decision for me — I got a lot of cards and the thrill of opening packs, even if I didn’t get all of the parallels I’d have gotten with hobby boxes. I have no doubts that next year’s product will be strong and hard-to-find as well; I just hope I’m able to track down some value packs again.

See the rest below:

Leave a Reply to David POLAKOFF