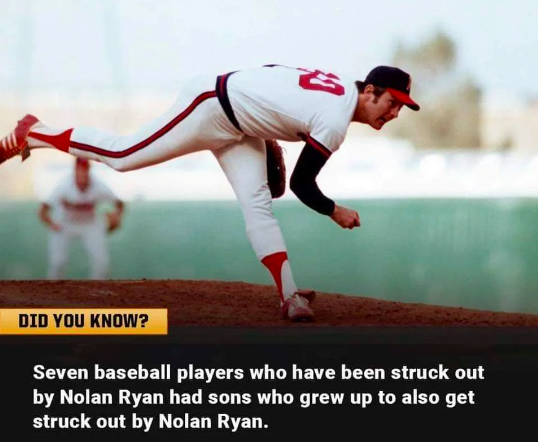 7. Maury Wills (1960) and Bump Wills (1983) – 23 years: This one is quite an interesting one, because as short as the gap is relative to the others on this list, it could be even shorter, to the tune of 16 years. Maury Wills did not have a contract with Topps for many years. After being passed over as a minor leaguer trying out for a big league spot in 1958 training camp, Wills signed an exclusive contract with Fleer, appearing in the 1963 Fleer set when he was recognized as having been the NL MVP in 1962. Wills’s first official Topps card was in 1967, when he was with the Pirates. However, he appears in a 1960 Topps card that highlights the 1959 World Series. The card, “Luis Swipes Base,” features future Hall of Famer Luis Aparicio sliding into second ahead of a tag by Wills. Since this is Wills’s first Topps appearance, many collectors consider it his rookie card. Maury’s son Bump played his last game in 1982, but still appeared in the 1983 Topps set as a member of the Cubs, despite playing in Japan that season. With Bump having been born when Maury was just 20, and Maury’s first Topps card not occurring until he was 27, the circumstances all came together to give the Willses the smallest gap of any combo on this list. 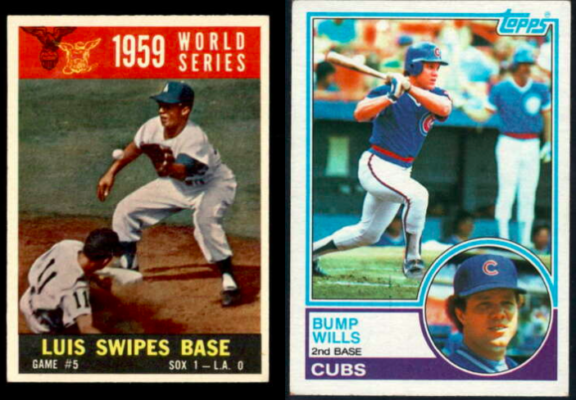 6. Hal McRae (1968) and Brian McRae (1999) – 31 years: Hal McRae was one of the first great designated hitters, making 3 All Star games, finishing 4th in the 1976 AL MVP vote, and leading the league with 133 RBI in 1982. He has a high-number rookie card in 1970 Topps, but because he got his first cup of coffee in 1968, he also has a mid-series rookie card in 1968, making that his first Topps card. His son, Brian, was a different type of player, relying more on speed than power. Brian had a solid career, but couldn’t quite hit enough, which ended his career at age 31. His 1999 Topps card was his final regular-issue. 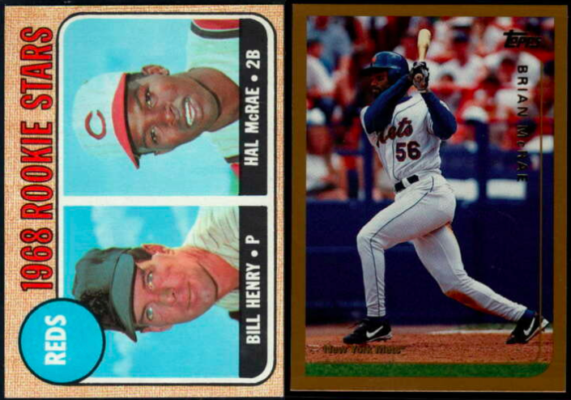 5. Tito Francona (1957) and Terry Francona (1990) – 33 years: Tito Francona started his career at just 22 years old in 1956, and appeared on his first Topps card in 1957. His son, Terry, is the better-known family member, but not for his playing career. As a manager, Francona has compiled an impressive and near-certain Hall of Fame resume, including leading the Red Sox to their first World Series championship in 86 years. But as a player, the younger Francona couldn’t quite cut it, playing parts of 10 seasons in a backup role. His last regular-issue Topps card came in 1990, a season in which he played 3 games and did not get a hit in his 4 at bats. Of course, if we counted Terry’s managerial cards, the number here would be different, but we’re talking about player careers, so the Franconas are stuck at 33 years. 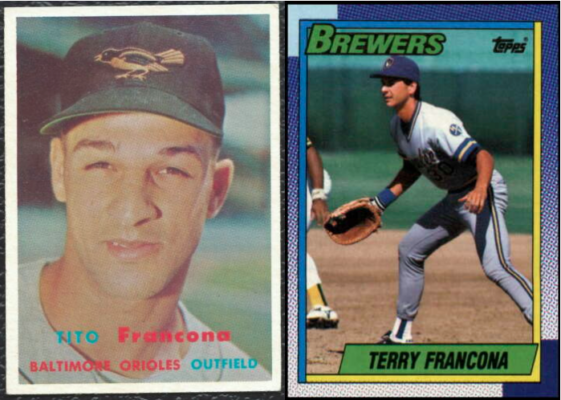 4. Ken Griffey (1974) and Ken Griffey, Jr. (2010) – 36 years: I was shocked when I found out this combination was so low on the list. After all, the Griffeys met the criteria I expected would be needed to top this list – a father who started young, a son who played for a long time – but ultimately, they fell short anyway. (Note, too, that the Griffeys were the first father/son combination to play together, so that should have clued me into the fact that they’d be a little lower; their careers overlapping should have suggested as much.) The elder Griffey debuted in 1973 at age 23, and his first Topps card was in 1974. Junior ended his career in 2010 and that’s when he received his last regular-issue Topps card. 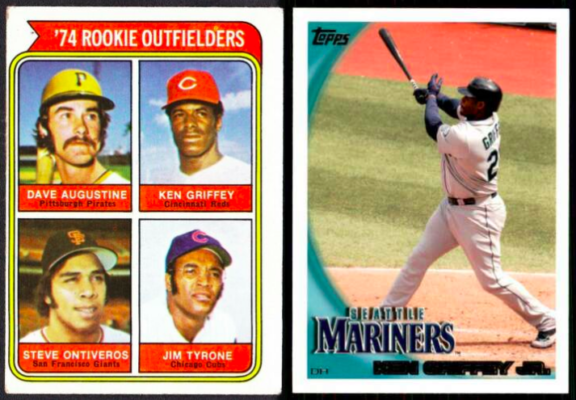 3. Bobby Bonds (1969) and Barry Bonds (2007)  – 38 years: This is another duo I expected to be higher on the list given the prolific careers both father and son had. Bobby was the first player in history with a 30 home run/30 stolen base season, and Barry…well, you know his story. Still, they clock in at number 3 with 38 years between Bobby’s rookie card and Barry’s final release. Bobby debuted at age 22 in 1968 and had a terrific season, but did not appear on a card until his high-number rookie cup card in 1969. Barry ended his illustrious career in 2007 after being unable to find a team willing to sign him with his all of his baggage. 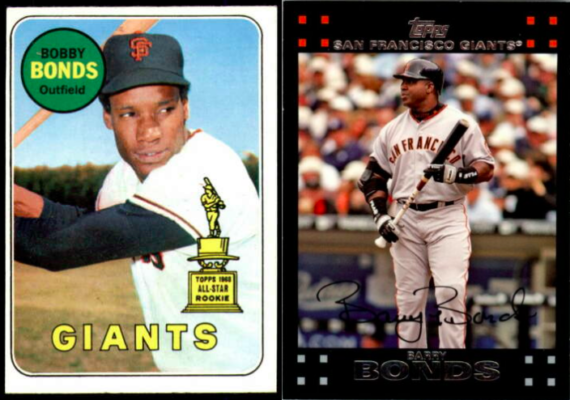 2. Dick Schofield (1954) and Dick Schofield, Jr. (1993) – 39* years: This is an interesting case deserving of an asterisk for a number of reasons. Just like I expected at the beginning, this high-achieving duo had a father who debuted at an early age; the elder Schofield started playing MLB games in 1953 at age 18! His first appearance on a 1954 Topps card looks like a high schooler’s yearbook photo. The younger Schofield did not meet my second guess at the criteria, playing very late into his career, as his last at bats came in 1996 at age 36. But that’s where things get interesting. Schofield didn’t appear on any major set in 1996; his only card was in a Mother’s Cookies regional issue. In 1995, he appeared on Fleer and Upper Deck Collector’s Choice cards, but no Topps cards. In 1994, he appeared on Collector’s Choice, Leaf, and Topps Stadium Club, but no base Topps card in its flagship release, meaning his last regular-issue Topps card was in 1993, 39 years after his father’s rookie card. We’d be at 40 years if we went with his Stadium Club release, and if we accepted his 1995 Fleer or Upper Deck issues, the Schofields would be tied at 41 years with… 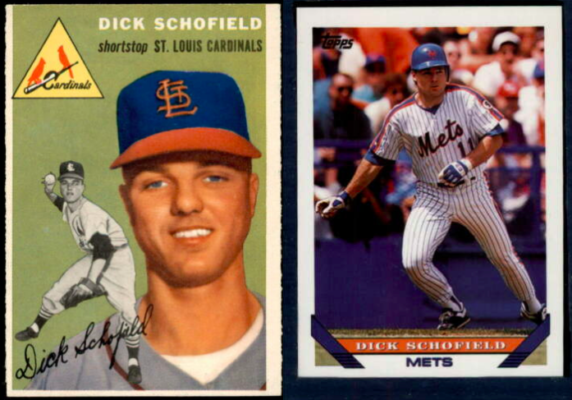 1. Sandy Alomar (1965) and Sandy Alomar, Jr. (2006) – 41 years: I admit, I never saw this one coming. Sandy Alomar, Sr. was a solid ballplayer who made his debut in 1964 at age 20 and was on his first Topps card in 1965. The older Alomar son, Roberto Alomar, fared much better, earning entry into the Hall of Fame after his turn as one of the greatest second basemen of all time, and was also struck out by Nolan Ryan. But it was the younger son, Sandy Alomar, Jr., who propelled the Alomar clan to the top of this list. Despite playing catcher, a position not known for its longevity, Sandy Jr. played until he was 41 years old in 2007, though he didn’t appear on a Topps card in that year, meaning his last issue was in 2006. Still, this gap represents the largest distance between the rookie card and final card of a father/son combo who were struck out by Nolan Ryan. 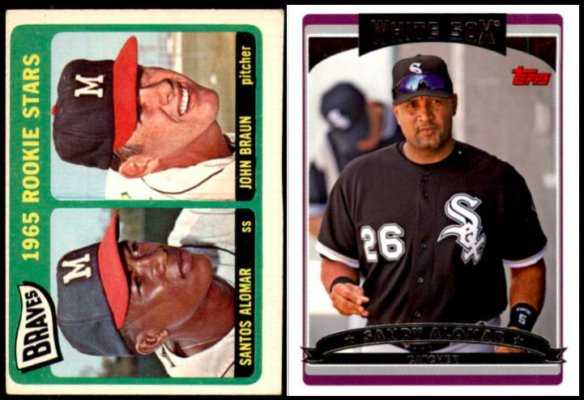