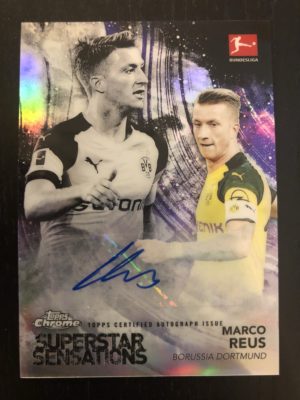 Ever since Topps sent me a box of their MLS product, I have become more interested in soccer and in soccer cards. I had tons of fun Opening 2019 Topps MLS, and the cards made me start exploring the world of soccer collecting. But if 2019 Topps MLS gently sent me on my way, then the box of 2018–19 Topps Chrome Bundesliga I received may well give me a giant push into the world of soccer collecting. This product is beautiful, and if you love refractors like I do, then you will be thrilled with opening a box. Boxes come with 18 packs, 4 cards per pack. Unlike the MLS product I reviewed earlier, which had no autographs in the set, this box guarantees one signature per box.
The design follows the 2018 baseball flagship design, which I thought was one of the strongest Topps designs of the last decade or so. Right off the bat I got a green refractor numbered to 99 of Kevin Trapp in my first pack, and I was hooked. Like the baseball product, these refractors are beautiful, with colors that seem to jump off the card. 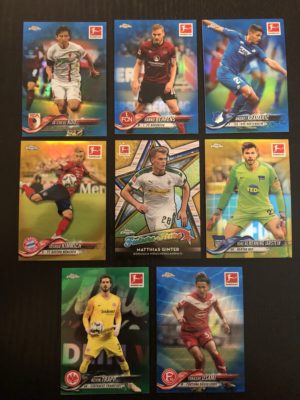 My second pack yielded a Superstar Sensations autograph refractor of Marco Reus, numbered to 25. Reus is kind of a big deal — he’s the captain of one of the biggest German clubs, and he plays for the German National team that won the World Cup in 2014 (even though he didn’t play due to injuries). Like its baseball counterpart, the Superstar Sensations cards contain a full color and a monochromatic image of the player side by side, creating a visually appealing foreground against an otherwise muted background.
As I said earlier, if you are a fan of refractors, this product will blow you away like it did for me. In addition to the green refractor I pulled in my first pack, I also received three blue refractors numbered to 199, one blue wave refractor numbered to 99, two gold refractors numbered to 50, and one gold future stars refractor, also numbered to 50. I beat the odds stated on the packs by a good margin, but even at the stated odds, each box should yield a good number of refractors — they should appear at a rate of at least 6 per box.
Although they have the largest print run, the blue refractor is my favorite one from a visual standpoint. My best, however, was a gold refractor of Joshua Kimmich, a 24-year-old defender on FC Bayern München. A friend of mine likes to describe the team as such: “Bayern Munich are like Alabama. They’re so so so good.” Kimmich is a starter on the best team, and a gold refractor of his is pretty cool. 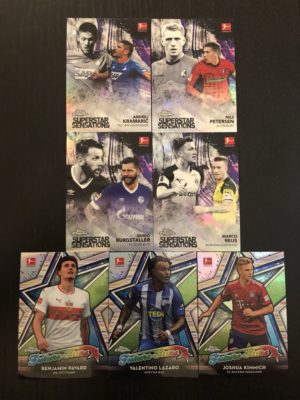 Inserts were plentiful and familiar. In addition to Superstar Sensations, the Topps Future Stars set made an appearance. I received 4 of the former and 3 of the latter. As for base cards, I received 56 with no duplication. That’s 62% of the complete 90 card set, so I assume that with good collation, two boxes would yield a complete set.
All in all, this was an incredibly fun product to open. With a familiar design, tons of color, and an autograph in each box, you can’t go wrong with this product, even if you’re still learning about soccer like I am. Opening 2018-19 Topps Chrome Bundesliga has furthered my interest in soccer collecting, an avenue I never really gave a thought to before I started opening Topps soccer products. I’m hooked, and if you open this product, it’s a good bet that you will be too.