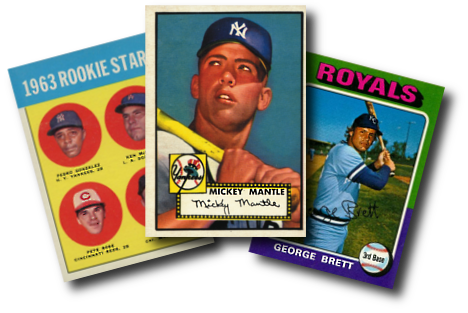 I saw something interesting in a baseball card facebook group the other day: a member posted a 1976 Topps Billy Williams card, and said it was “on the edge of being considered vintage.” This got me thinking: what constitutes the end of the “vintage” era for baseball cards?

I know for certain there are differing viewpoints on this, as I’ve had disagreements — we’ll call them spirited discussions — with folks at card shows about my inclusion of some cards in my “vintage” boxes. “Vintage” in general usually means older than 20 years old in most arenas, including on the website Etsy, but in our industry, the world has a completely different meaning.

In any event, it seems to me there are 5 potential cutoff dates for the vintage era, each with their own meritorious arguments. (Spoiler alert: none of them are 20 years ago.)

I’ve never seen an argument for a cutoff earlier than 1969, but if you’ve got one, I’d love to hear it.

1969 is a great cutoff date for vintage because it just sort of fits well. Arbitrarily cutting off the era in the middle of a decade seems weird, and if you’re inclined to place the cutoff earlier, you may like the neat and tidy end-of-decade slice that 1969 provides. During the boom of the late 1980s and early 1990s, when card shows were becoming popular and card shops dotted the map like McDonald’s, 1969 was the natural cutoff for vintage, since it was more than a decade previous. This year also has Mickey Mantle’s last regular issue card, and since Mantle has long been, and still is, king in the baseball card world, that lends some weight to the argument too.

But there are definite shortcomings with 1969. Chief among them is that there’s no substantive difference between 1969 and 1970 Topps cards: both were issued in series, both were fairly plain and understated designs, and neither had action shots or photos on the back (both of which were instituted in 1971). Yet no one advocates for 1970 being the last year of the vintage era. Is the allure of Mantle’s last card really that strong?

This is probably the gut-check choice for the majority of older collectors. 1973 is a very logical choice for several reasons. The primary reason people will instinctively provide for 1973 is that it was the last Topps set issued in series; 1974 was the first factory set offering. 1973 also represented the end of U.S. involvement in Vietnam and the end of the draft, so it signified the end of mothers throwing out their sons’ baseball cards. Symbolically, 1973 has a lot going for it.

The flipside is that 1974 was, as of this writing, 45 years ago. There is no way — no way — something 45 years old doesn’t count as vintage. That’s a long time ago; Saturday Night Live hadn’t even premiered in 1974, for heaven’s sake! This cutoff also excludes the funkiest set design of them all, 1975 Topps, and if that isn’t considered vintage, what could it possibly be considered?

In 1980, there was still only one baseball card manufacturer: Topps. In 1981, Donruss and Fleer released products, and the baseball card landscape as we know it was forever altered. For a lot of people, 1981 represents the ushering in of the junk era, a time of overproduction and oversaturation. Some people may say 1979 instead of 1980, probably for the same reason that people advocate for 1969 instead of 1970. But 1979 doesn’t let Rickey Henderson’s iconic rookie card get in the mix. But…

The issue with 1980 is that it doesn’t include rookie cards of several top-tier Hall of Famers: Cal Ripken, Jr. (1982), Wade Boggs, Tony Gwynn, and Ryne Sandberg (all 1983). The 1983 cutoff fixes this problem. This set also has Johnny Bench’s last card from his playing years. Starting in 1984, Fleer released Fleer Update, growing the number of mainstream product lines ever-so-slightly, and in 1985 Donruss Highlights and Leaf joined the fray, so 1983 is a neat cutoff point before set offerings began to balloon.

On the flip side, though…

A 1983 cutoff misses out on some of the most iconic modern rookie cards: 1984 Fleer Update Roger Clemens and Kirby Puckett; 1984 Fleer, Donruss, and Topps Don Mattingly; 1985 Topps Mark McGwire; 1986 Donruss Jose Canseco; and 1986 Topps Traded Barry Bonds. Including those gives more heft to the “vintage rookie” category. But there’s something about those cards that feels markedly different from, say, a 1983 Wade Boggs, namely that they were “hot ticket items” during the junk wax boom. In 1983, cards still had the air of scarcity; by 1986, investment mode was fully on.

As a personal gut-check, I’m a 1983 kind of guy. 1969 and 1973 feel way too early for my liking and 1980, while it feels nice at first glance, leaves out too many big cards for my liking. 1986, though, feels way too late, and there’s a definite difference between the reactions to cards from 1986 and those to cards from 1983. So, 1983 is my sweet spot. When I set up as a vintage dealer at shows, though, only big cards from 1983 (and the early 80s in general) are in my boxes. While I have Boggs and Gwynn rookies in my vintage boxes, I would never have a 1983 Topps Bruce Hurst card in my boxes, which creates an interesting sort of dichotomy in my head: if I only consider the big cards from a certain year worthy enough to be in my boxes, is the issue still considered vintage?

The more I think about it, the more I arrive at a totally different conclusion, which we’ll delve into next week. In the meantime, I’d love to hear your thoughts on when the vintage era ends.