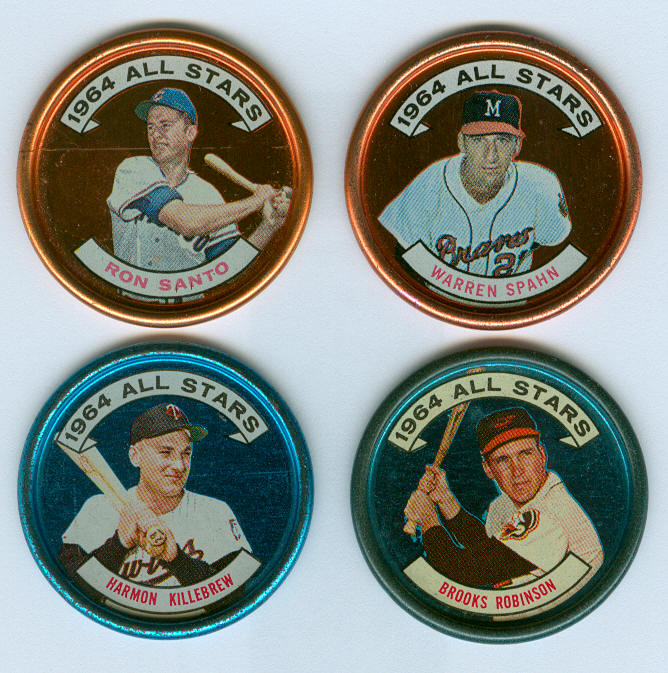 Last week, I started a countdown of my personal list of the top 15 vintage Topps insert sets, beginning with numbers 15 through 11. This week, the countdown continues with numbers 10 through 6. As a reminder, the rankings include only true insert sets — those that were inserted into standard packs — and not standalone products. As a result, some of my favorite sets, like 1964 Topps Stand-Ups, are absent from the set.

Okay, I’m sort of cheating here — but not really. The 1974 Topps Traded set was unique and, technically, qualifies under my definition of an “insert set.” In 1972, Topps included 7 high number cards of players who were traded, complete with a “TRADED” stamp across the front, but these were standard-issue cards within the final series of the set. The 1974 issue is the first Traded set with its own numbering — each of the 44 cards is numbered with the player’s regular issue card number, followed by a T. The Traded set, a forerunner to today’s much larger “Topps Update” sets, were issued in two ways: one, as a complete offering at JC Penney along with the rest of the cards in the form of the first ever Topps Factory Set; two, as random inserts within packs issued later in the distribution run of 1974 Topps. The latter is what classifies this, in my opinion, as an insert set.

The biggest knock on this set is that the checklist kind of stinks. Hall of Famers Ron Santo and Juan Marichal, along with popular players like Lou Piniella and Jimmy Wynn, dot the mostly pedestrian roster of names. 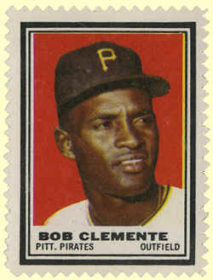 This was the second issue of Topps Stamps inserts, with the first (SPOILER ALERT!) to come later in this list. The stamps were issued two per panel, and collectors search for both individual stamps as well as uncut panels. This is a colorful release, with full-color photos on either a red or yellow background. In addition to players, Topps included team logo stamps.

One of the downsides to this set is that it’s a humongous release, making it tedious to collect. Additionally, due to the combinations Topps made, there are actually more unique panels (245) than unique stamps (200). This means that if you are choosing to collect both panels and stamps, you have a daunting task ahead of you. 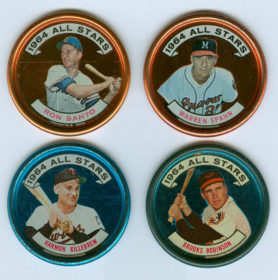 Last week, I ranked the 1971 Coins issue at #12 on my list. The 1964 release ranks higher for a few reasons, beyond the fact that sequels are never as good as the original (except for The Godfather). I noted last week that the 1971 issue, at 153, is large. The 1964 standard checklist has 164 coins — or 120, or 44, depending who you ask. The original checklist was 120 coins large, but an additional 44 All-Star coins were released later in the year. Some collectors consider all 164 as a complete set, but Topps themselves gave reason to consider them separate; the back of the first 120 coins says “COLLECT THE ENTIRE SET OF 120 ALL-STARS”, while the back of the All-Stars says “COLLECT ALL 44 SPECIAL ALL STARS”, lending credence to the idea that they were intended as two separate sets. Therefore, collectors can choose to collect either 164, or 120, or 44, and still claim they are building a set. Those numbers are also open to some interpretation, as there are actually three variations within the set: Mickey Mantle can be found batting either right-handed or left-handed, and Wayne Causey and Chuck Hinton can be found with backs erroneously stating they were in the National League, as well as the corrected American League versions.

This issue, like the 1971 issue, is colorful, but not quite as colorful as 1971, with silver (National League) and gold (American League) backs the only colors in the standard set of 120, with red (National League) and blue (American League) added for the final 44 All-Stars. The checklist is much stronger than 1971 as well, as there are 3 Mickey Mantle coins (the two All-Star variations and the standard issue) along with two Sandy Koufax, two Clemente, two Aaron, and a slew of other Hall of Famers.

I love anything unique, and the 1969 Topps Decals set is definitely unique. It’s also definitely not unique.

First, the not unique part: the design is identical to the 1969 Topps standard issue. The team name is across the bottom, while the player name and position appear in a colored circle at the top. And despite the small nature of these decals, Topps still somehow found it prudent to devote almost one-third of the space on the decal to…nothing. Each decal has a giant chunk of clear space along the bottom and the side.

Now, the unique part: there isn’t another cellophane-based issue that I’m aware of. This 48-card set consists of see-through stickers intended to be placed on things, like notebooks or binders or lockers or your little brother’s forehead. To Topps’s credit, despite the identical design, most of the players in this set have different photos used than their standard issue 1969 card. That being said, many of the pictures were used before — for example, the while the photo on the 1969 Topps Decal of Willie Mays is different from his 1969 Topps card, it is the same photo as his 1965 Topps card. Because this set was supposed to be stuck on things, it’s tough to find high-grade, unpeeled examples, making for a fun chase. And, of course, the checklist is strong, featuring the recently-retired Mickey Mantle along with Hank Aaron, Willie Mays, and Roberto Clemente among its 16 Hall of Famers, or one-third of the set. And that doesn’t even include Pete Rose! 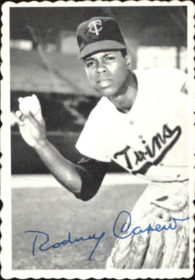 This set, along with the 1968 Topps Game set, is one of the more recognizable insert offerings of the 1960s because they are both fairly common. The Deckle Edge set has a leg up on the Game set, which I ranked #13 last week, for a number of reasons. First, despite the lack of Mickey Mantle, who retired before the 1969 season, the checklist is strong, featuring 11 Hall of Famers (again, one-third of the standard issue set!) including Roberto Clemente and Willie Mays. Second, the design is beautiful, flawless, and unique; black and white photography was entirely unique to a Topps issue, which didn’t have black and white cards except for the 1951 Red Backs and Blue Backs, and even then, there was so much color on the card that most collectors probably don’t even realize the photographs are monotone. On this issue, the only color is the beautiful blue facsimile signature on the front of the card. Third, the deckled edge was entirely uncharted territory for a company that had previously only done straight, curved, or perforated edges. To add to all this, the checklist is anything but boring, as there are two variations that resulted in shortprints: card number 11, regularly Hoyt Wilhelm, also appears as Jimmy Wynn, and card number 22, regularly Rusty Staub, also appears as Joe Foy.

The set does share some of the same negatives as the 1968 Topps Game set, however. The backs of the cards are utterly boring, with no information other than the player and card number. The cards are also notoriously tough to find in high-grade condition, as centering is an absolute mess, and the edges frequently get damaged. Despite these shortcomings, the attractiveness of this set places it in a strong position on the list.