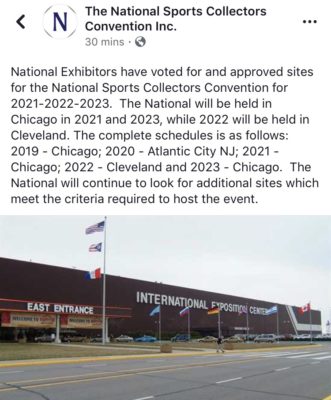 Last Thursday, the National Sports Collectors Convention announced that the host cities for 2021, 2022, and 2023 had been decided. For those of us who are good at discerning patterns, there was no surprise.

The schedule released last week does not deviate from this. Chicago will host in 2021 and 2023, with Cleveland playing host in 2022. The only surprise for me here with Cleveland’s selection, as there were rumors swirling at the last national that many dealers wanted Chicago to be the permanent home of the convention. Chicago is typically known as the strongest location for dealer sales, but because of the high demand for tables, dealer spaces sell out almost immediately. Of the three locations, it is also the most expensive city to travel to and to stay in for a week. As you can imagine, lodging in Chicago is much more expensive than in Atlantic City or Cleveland.

The comments on the announcement post were filled with suggestions as to where the National should be held in the future. This was brought on by the last sentence in the post, which stated that the group would continue to look for venues that met their standards. That having been said, the whole reason these venues alternate as hosts is because they are three of just a small handful of spots that will meet those needs. The National books its venues 3 to 5 years in advance. The Donald Stephens Convention Center in Chicago allows them to do this, but many other convention centers will not accept bookings that far in advance. Medium- or large-sized cities that only have one major convention center, such as Orlando, will typically not book events that far in advance, as they know their venue will be in demand. (Cleveland has two convention centers, as does Chicago.)

Additionally, the National looks for cities that have a decent amount of lodging available for a fair price and are easy to navigate for dealers who come in from out of state with large trucks; this knocks cities like New York, Atlanta, and Washington D.C. out of the running.

So, for the foreseeable future, collectors are going to become very comfortable with the cities of Chicago, Cleveland, and Atlantic City. 2023 will mark a decade of the arrangement with this triumvirate, and I don’t expect it to stop any time soon.