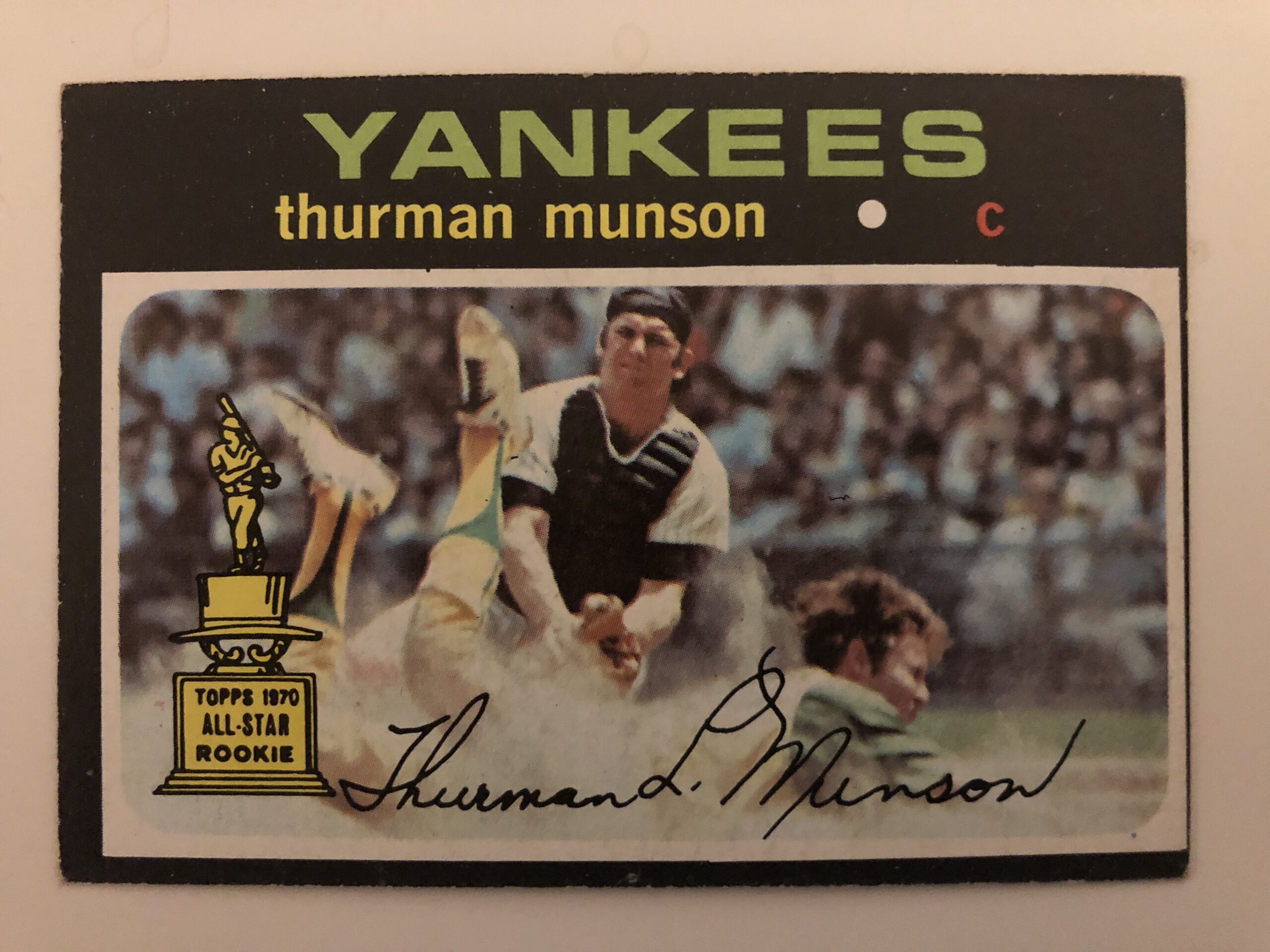 None of that matters. Card number 5 from the 1971 Topps set, of Thurman Munson, is my favorite card of all time.

One day when I was a kid, my dad came home from the flea market with a few binders of old baseball cards, and contained among the binders were a few dozen 1971 Topps cards. I fell in love with the set right then and there, which, as I’ve noted in other posts, I completed over the course of about 15 years.

The binders contained a mix of names I’d never heard of at the time and big stars. Thurman Munson was somewhere in the middle for me. I was only 10 or 11 years old, and I knew he was a great player, but I also knew he wasn’t a Hall of Famer. But when I saw the card, I was entranced.

I know why this set stuck with me so well: it was the first vintage set I was exposed to more than one card at a time; my dad bought the cards for me; the black borders were unique. However, I don’t really have a good reason why this particular card captured my love so quickly. I do have a few theories, though. It’s one of the few horizontally-oriented cards in the set, and that just made it cool. It’s got the big ol’ Topps All-Star Rookie trophy on the front, almost as tall as Munson himself; more cool points. It’s the only card of a player I can think of where the second year Topps card is worth more than the Topps rookie card. The photograph is incredible, a true action shot of a play at the plate, and yet it leaves you wondering: was the runner safe or out?

The version of this card in my dad’s haul from the flea market was beat up pretty badly. I didn’t wait too long until I got a better copy…and then another better one…and then another. Unlike most cards that I upgrade, I don’t always sell the poorer versions of this card: I like it that much.

I’ve also found over the years that the card is quite the conversation starter among collectors. As a freshman in college I went to a new card shop in town. The owner and I started talking about 1971, and I told him about my love of this card; he said, “Oh man, you gotta see this!” He pulled out a 1/1 manufactured relic from 2005 Topps Rookie Cup, a product that had just been released (and is now one of my favorite modern releases ever, but perhaps that’s a story for another post). This card was an original Munson, with the trophy area cut out and a manufactured relic trophy in its place. It was so cool, and he wanted $100 for it. I was a poor college student and that was out of the question. I’ve never regretted not buying something more, and I’m constantly hoping the card will resurface one day. But what I don’t regret is the conversation; the card shop owner became one of my closest friends, someone I still speak to and see regularly.

At card shows, I frequently talk to both dealers and buyers about the card, but at this year’s National something different happened. A buyer at my table had been asking me trivia questions for a bit, and when the topic of my favorite card came up, he asked me: “Who’s sliding into home plate?”

I was stupified. Not only did I not know the answer, I never even thought to try and find out the answer over the 20 years I had been in love with this card. I told him how embarrassed I was that I didn’t know the answer, and I was relieved when he told me that he had no idea, either.

Fortunately, the internet knows all, but it turns out that for Bruce Markusen over at The Hardball Times, this wasn’t an easy one to figure out. He did eventually learn that it was Chuck Dobson, a name that’s now seared in my memory as another piece of my favorite card of all time.

Spoiler alert: he was safe at the plate.

What’s your favorite card of all time? Comment below for a chance to win a grab bag from Big League Cards!