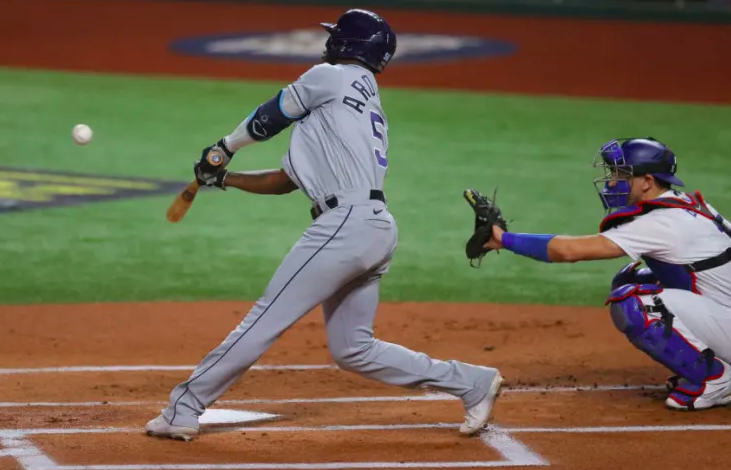 The usual paths to becoming a top seller in the sports card world are fairly straightforward: you are either a top prospect or you become a top-performing player in the big leagues. In both cases, it helps to play for the right team; a prospect or star for the Yankees or Cubs will usually outsell one for the Athletics or Marlins. But there’s a slightly easier path to becoming a hot commodity: perform in the playoffs.

That’s the path Randy Arozarena, a previously-little-known outfielder for the Tampa Bay Rays, took this year. Arozarena’s career until September of this year was interesting, but not all that unique in baseball. He defected from Cuba in 2015, signed with the Cardinals in 2016 for $1.25 million, and played well enough in the minors to earn an unheralded debut in 2019. Then he was acquired by the Rays in January, in a trade that mostly generated headlines for who the Rays traded: Matthew Liberatore, their top draft pick from just two drafts prior.

Arozarena contracted COVID-19 and sat out the first part of the shortened MLB season, eventually making his debut on August 30. He had an impressive final month of the season, hitting 7 home runs in just 64 at bats and putting up a 1.022 OPS. Even still, Arozarena was flying under the radar. One of his more common and lower-end autographs, from the 2020 Topps Series 2 Baseball Stars set, was selling for about $2 at the beginning of September, and about $5 at the beginning of October.

Then the magic started. The Rays coasted into the postseason with a well-rounded team and Arozarena was just one of the many contributors unknown to the baseball-watching public at large. In the Wild Card round, he played in two games and went 4 for 8 with two doubles and a triple: impressive stuff but not quite legend-making. His aforementioned Baseball Stars autograph was up to around $20.

That would change quickly. In the Division Series, Arozarena went 8 for 19 with 3 home runs in 5 games. His theatrics helped the Rays beat the rival Yankees and move onto the Championship Series against baseball’s biggest villain: the Astros.

Folks were taking notice of Arozarena’s power after his 3 homers against New York. The Baseball Stars autograph was now selling for just above $50, a humongous sum for the previously-unknown outfielder.

But the 25-year-old was just getting started. Against the Astros, Arozarena went 9 for 28 with 4 home runs: his game 7 homer allowed him to set the record for most rookie home runs in a single postseason, and helped the Rays move into the World Series. Arozarena won ALCS MVP (the first rookie position player to ever do so). The Baseball Stars autograph reached a new height: $70.

But despite his hot bat, the Rays lost the World Series in heartbreaking fashion. Remember what I said in the beginning about playing for the right team? A World Series winner will outsell a World Series loser, and by losing to the Dodgers, the Rays become yet another bottom-rung team again. The autograph has settled back down in the $75-$80 range.

I highlighted one particular card in this journey because it wasn’t numbered and didn’t come from a high-end product. But all of Arozarena’s cards, including base cards, followed the same general trajectory. It remains to be seen how strong his rookie cards will sell once 2021 products with a new crop of exciting young players come out. I don’t anticipate his cards will maintain this level. But, it’s always a fun ride when a guy goes from zero to hero in a matter of days. This year it was Arozarena; next year it will hopefully be someone I have a lot of cards of!