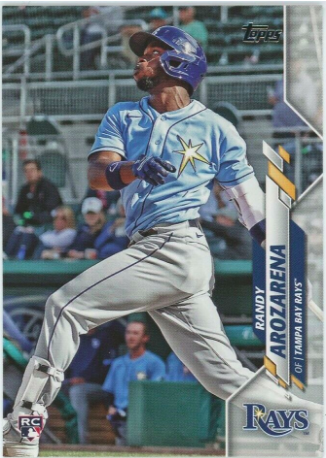 This past Friday, Topps released its Update series for baseball. In normal years, few sets generate as much excitement as Topps Update; for the past few years, Update has had the first rookie cards of hot players who debuted during the season. But this year, perhaps no set was impacted more by the coronavirus shutdown of MLB than Update. What has resulted this year is a shift back to Update’s roots as a speculative product rather than a surefire way to pull top-tier rookie cards.

Topps Update has had a long and interesting history. What started as Topps Traded in 1974 generally consisted of just that — players who had been traded. As the set evolved, rookies became a larger part of the story. After returning from a brief hiatus in 1999, the product was renamed Topps Traded and Rookies in 2000, then Topps Updates and Highlights in 2005, and finally, Topps Update in 2010. Prior to the introduction of rookie card rules in 2006, the rookies in the Traded/Update brands were often minor leaguers who were several years away from the majors. In 2000, for example, Miguel Cabrera’s rookie card appeared, though he would not make his MLB debut until 2003.

After the introduction of the rookie card rules in 2006, which stipulated that a player had to appear on a team’s 25 man roster in order to receive an official rookie card, the quality of players with RCs declined. The proof is in the pudding. The 2005 set had rookie cards of guys who would go on to be stars but didn’t debut until much later, with Ryan Braun (2007 debut), Jacoby Ellsbury (2007), Jay Bruce (2008), and Andrew McCutchen (2009) leading the way. The 2006 set is headlined by Cole Hamels and Jon Lester; the former had already had not one, but two, flagship Topps rookies (2003 and 2005).

The reason for this decline is simple: despite releasing after the season is over, the checklist for the product gets finalized sometime around July. So, in order to appear in Topps Update, a player would have had to make his major league debut sometime between April and July. Any rookie who debuted after July would likely receive a rookie card in either Series 1 or Series 2 the following year. For years, the standard operating procedure for baseball teams was that top rookies would receive a call-up in September, when active rosters expanded to 40 players. That resulted in most top rookies receiving RCs in Series 1 or 2, rather than Update. All this meant that Update was generally a speculative product, one that got tucked away in a box and looked at a few years later to find some gems. Mike Trout’s 2011 Update rookie wasn’t a big deal in 2011; he was included because he made his debut came in July, and the .220 batting average he had in his rookie campaign didn’t make his cards fly off the shelf.

Trout’s incredible career certainly sent interest in Update series cards skyrocketing, but it still remained largely speculative, as most key rookies had already had rookie cards in either Series 1 or 2. Rookie cards of players who had a successful rookie season and no card in Series 1 or 2 were few and far between: Yasiel Puig in 2013, Carlos Correa and Francisco Lindor in 2015, Trevor Story in 2016. Other cards that are popular now, like the 2014 Jacob deGrom rookie, weren’t hot at the time of release.

The true shift in how Update was viewed was really a result of service time manipulation by Major League Baseball teams. Rather than starting top prospects’ service time clocks in September, teams began holding off debuts until a few weeks into the next season, which would gain them an additional year of control prior to free agency. This was famously employed with Kris Bryant in 2015, with the Cubs keeping him in AAA until April 17. In Bryant’s case, he debuted early enough to make it into Series 2 as a later addition to the checklist. But in 2017, Cody Bellinger didn’t debut for the Dodgers until April 25. He had an historic rookie season, hitting 39 home runs and 97 RBI en route to winning rookie of the year. And his debut was in the sweet spot that allowed his rookie to be in Topps Update.

Similar circumstances happened for Ronald Acuña, Jr. and Juan Soto in 2018. They debuted on April 25 and May 20, respectively, and had huge rookie seasons, finishing 1-2 in the NL Rookie of the Year voting. Both of them had their RC debut in 2018 Topps Update as a result. The trend then continued with Vladimir Guerrero, Jr. (April 26 debut), who made it into Series 2 as a shortprint without a card number and therefore not on the official checklist, leaving his first official RC for Update.

This year, however, the MLB season did not begin until July 24, well after the usual cutoff for inclusion in Update. As a result, this year’s crop of rookie cards are weak: Randy Arozarena leads the pack with his first flagship Rays RC, but he already had a rookie card in a Cardinals uniform in Series 1. Jake Cronenworth, then, is the top rookie card in the set, but there’s not a lot of demand for a 26-year-old shortstop with fewer than 200 career at bats.

As a result, 2020 Topps Update is not like it was the past few years, with the opportunity to open a box and sell hot cards right away. Instead, it harkens back to the old days of Topps Update, when opening a box meant sticking the cards away for a later date. That sort of strategy gave us the greatest modern set, 2011 Topps Update, with rookies of Trout, DJ LeMahieu, Jose Altuve, Paul Goldschmidt, Anthony Rizzo, and others, none of which were hot at the time of release. Update almost always turns up a hot rookie card, but this year, unlike the past few years, patience will be the key.