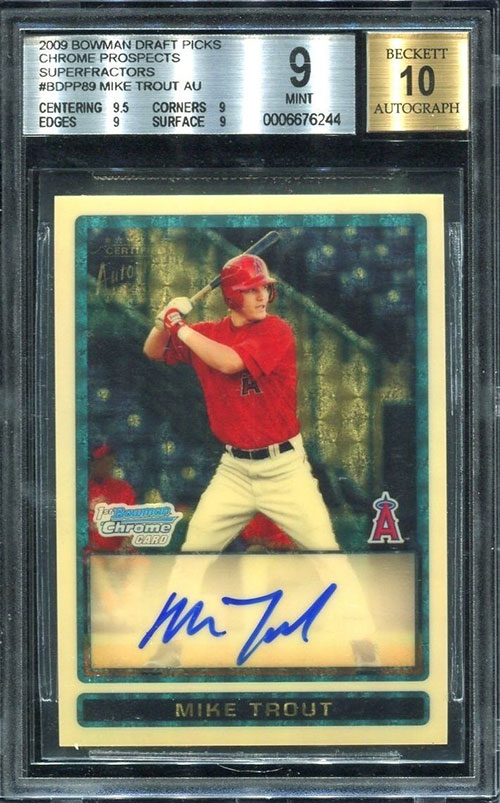 In my non-baseball card-related life, I write and edit math textbooks. This week, we’re going to start this week’s post off a little differently: with a math problem.

Pencils down. We’ll come back to this later and explore the answer. (Or, if you’re super curious, just skip to the end.)

In the meantime, the big news story in the sports card world over the last week has been the sale of the 2009 Bowman Chrome Mike Trout Superfractor autograph. Despite the card receiving only a grade of 9 from Beckett — relatively low for a modern card — it is Trout’s earliest major autograph and is the only one in existence.

The auction opened at $1 million through Goldin Auctions and the gavel price ended close to $4 million, setting a record for the most expensive card ever sold. The previous record-holder, Honus Wagner, could not be reached for comment.

There’s been a lot of buzz about the sale, with national news outlets even seizing the opportunity to discuss our hobby in light of the new record. Many collectors, however, have been deriding the sale, noting that it is indicative of a bubble and there wasn’t much room for the card to grow. This may surprise you in light of my post last week, in which I put on rose-colored glasses about the health of the hobby, but I tend to agree with them, especially on this last point.

The argument in favor of a high price is that this card is like a work of art. In a world where Picassos sell for $180 million and da Vincis sell for $450 million, $4 million for a one-of-a-kind card of one of the greatest players of all-time is chump change. This argument has its merits: if you’re a collector, and someone who appreciates the card for what it is and desires to own it, $4 million is a steal if you have that much change lying around.

That doesn’t mean the value will continue to appreciate, though. A scarce item isn’t worth what one person will pay for it — it’s worth what two or more people will pay for it. In order for this card to realize a return on investment, there have to be another two people out there, besides the current owner, who want to pay more for it. (Another alternative is that there just has to be one other person, and there’s actually no guarantee that there were two interested parties this time around, either: the auction house’s rules stipulate “Reserve bids are available to the House and the House may, at its discretion, confidentially place reserve bids and set “up to” bids where the next bid in succession would hit the reserve price.” For all we know, the reserve price was $3.7 million.)

Mike Trout also has to continue playing well, stay at the forefront of the conversation, not be upstaged by another generational talent, not get busted for steroids, not have any off-the-field issues, and so on. Trout is a surefire Hall of Famer no matter what he does for the rest of his career, but that doesn’t mean he’ll always be the hottest player in the hobby. For evidence of this, we need to look only to Trout’s teammate, Albert Pujols, who recently moved into 2nd (or 3rd, depending on who you ask) place on the all time RBI list. Pujols will be a first ballot Hall of Famer but his sunset years with the Angels have dampened what was once unbridled enthusiasm for his cards.

One side of the argument I don’t agree with, however, is that this is “perceived” scarcity, unlike the Honus Wagner card. Keith Olbermann made this argument on Twitter: 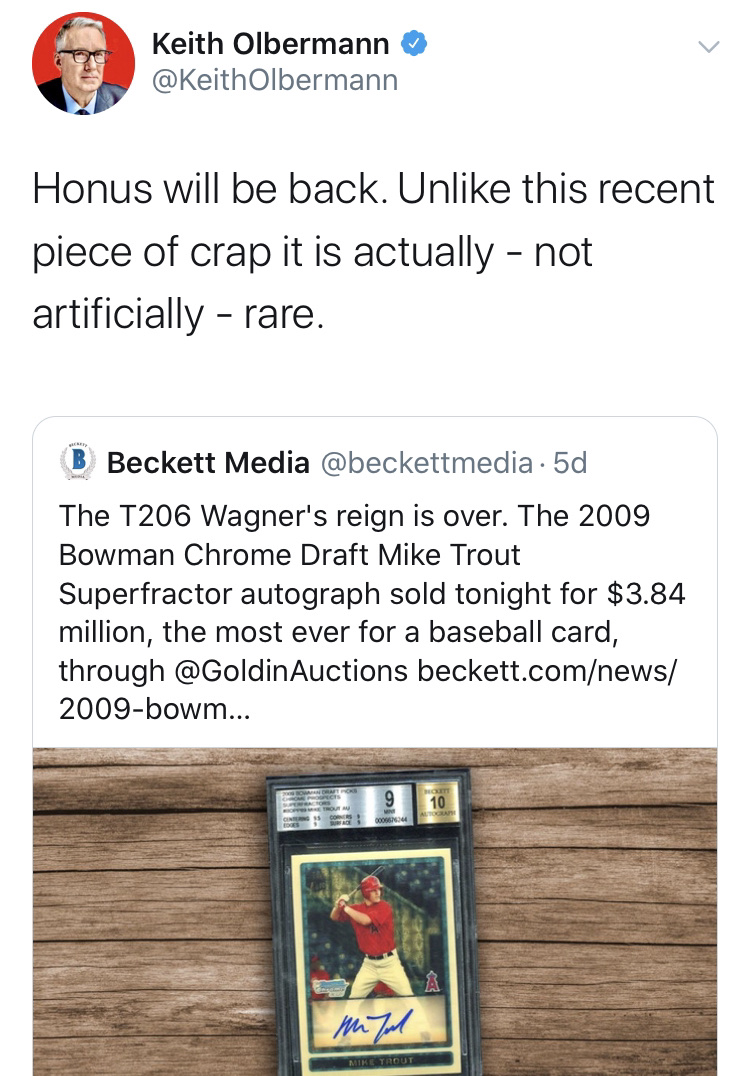 This perspective is preposterous. The card is rare, not artificially rare. There is only one in existence, just like there is only one of each Picasso painting, a purposeful tactic because making thousands of the same painting would be lunacy. And just like you could buy a Picasso signed print with a limited edition of 50 copies for a fraction of what the painting would cost you, you could buy a different 2009 Bowman Chrome refractor (or base autograph) less scarce than the superfractor for pennies on the 4 million dollars.