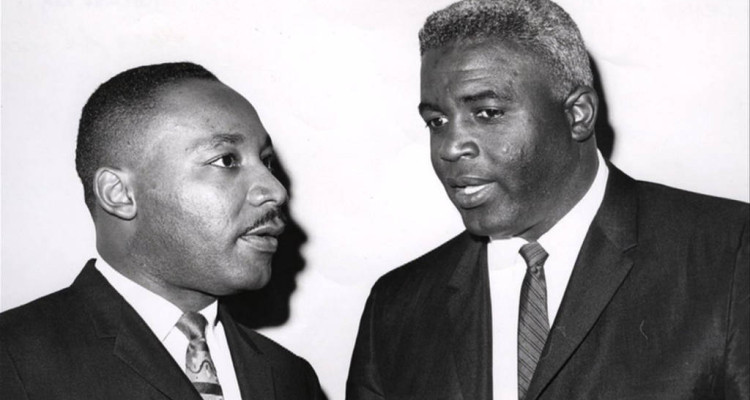 Today is Martin Luther King Jr. Day, and I always love the opportunity to meld baseball cards with holidays here at Inside the Pack. Fortunately, Dr. King has a very straightforward connection to baseball.

Before King’s rise to prominence as a civil rights leader, barriers were being broken on the baseball field. Jackie Robinson came first, as we all know, but there were many Negro League stars who followed suit shortly thereafter to integrate the game. In fact, King is quoted as saying to Hall of Fame pitcher Don Newcombe, “You’ll never know how easy you and Jackie [Robinson] and [Larry] Doby and Campy [Roy Campanella] made it for me to do my job by what you did on the baseball field.”

The earliest card that everyone can agree on that portrays an African American baseball player comes in the 1916 Zeenut set. The set features Jimmy Claxton, a pitcher who played with the Oakland Oaks. Claxton was of mixed heritage, but passed himself off an Indian. Although he pitched just one game for the Oaks, Claxton happened to be around when Zeenut was taking photographs for its Pacific Coast League set, and he was able to make it onto a card.

The price of this card certainly supports its claim as the first card of an African American baseball player. The demand is high, and the card is scarce, leading to inflated values — a version graded SGC 20/1.5 sold in 2011 for $5,581 at Robert Edward Auctions. So why the disagreement about the first African American to appear on a card?

It turns out, the definition of “card” is key to this investigation.

Prior to the 1916 Zeenut issue, two African Americans appear on issues from Cuba, called 1909 Cabanas. In addition to catcher Bruce Petway, outfielder Pete Hill — a baseball Hall of Famer — also appears on a card. Both Petway and Hill played winter ball in Cuba. However, the cards are not US-issued cards, so some people do not acknowledge these as the first African Americans on a baseball card, despite recognizing their importance.

Even before that, Moses Fleetwood Walker — who, in all technicality, was the first African American Major League ballplayer, more than 50 years before Jackie Robinson stepped foot on the field — appeared on a cabinet card with the 1888 Syracuse Stars team. This card sold for $24,000 in 2017 at Robert Edward Auctions. If you consider the cabinet card a baseball card, this issue would be your winner.

Post-MLB integration, Jackie Robinson was indeed the first African American on a baseball card, though it likely isn’t the issue you’d expect. Jackie was passed over for inclusion in 1948 Bowman, and the 1948 Leaf set, while widely regarded as his rookie card, was almost certainly released in 1949, not 1948. Either way, it doesn’t matter, because Robinson had a card in the 1947 Bond Bread set. His presence in this issue is a true rookie card, and was so successful that Bond Bread subsequently released a 13-card set of just Jackie Robinson in different poses. Although cataloged officially as a 1947 release, research (and photographic evidence) have shown that the cards were released intermittently between 1947 and 1950. Of all the cards we’ve discussed, the Bond Bread issues are the most readily-available and affordable, and it’s not even close. A low-grade copy will still run you slightly upwards of $1,000, a steal compared to the other cards noted here. A word to the wise, though: avoid ungraded issues, as reprints and rereleases run rampant.

So there you have it. If you have a desire to own the first baseball card featuring an African American, and you have deep pockets, you have a variety of cards to choose from that will allow you to lay claim to that title. You can’t go wrong with any of them.