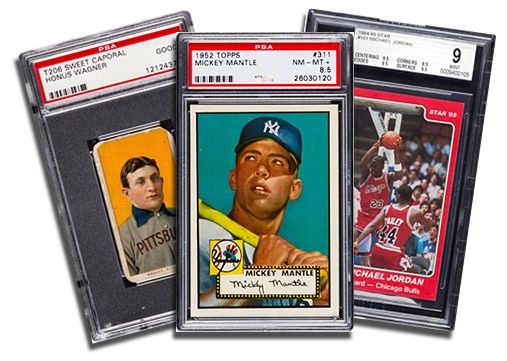 Since announcing the Mount Rushmore of Sports Card Industry Icons, we have been flooded with responses, nominations, and comments. Of all the commentary I have seen, it seems like there is one flash point in particular: should a player (or players) be enshrined on Mount Rushmore?

The nomination process, of course, is still open, by visiting Big League Cards in Casselberry, Florida; commenting on this blog post or Facebook post; or emailing mountrushmore@bigleaguebreaks.com. However, to this point in the process, it appears that three players have enough nomination votes — and meet the criteria — needed to be considered for enshrinement on Mount Rushmore. Those three players are Honus Wagner, Mickey Mantle, and Michael Jordan. There have been load of people speaking out either in favor of or against the idea of players holding one of the four prestigious spots. Both sides have strong arguments.

First, the side in favor of a player (or players) being enshrined. The main argument here is that more than anything, the players are what make the cards. People know Jackie Robinson and Willie Mays and Roy Campanella, but would the 1952 Topps set be as iconic as it was without Mickey Mantle? Would T206 cards hold such a special place in hobby lore if Cy Young, Ty Cobb, and Eddie Plank were the biggest cards in it? Would 1986 Fleer Basketball be a sought-after set in the absence of Michael Jordan?

Many people feel that because of this, players are every bit as deserving of enshrinement as industry insider folks. On one Internet forum where Mount Rushmore has been discussed, one person spoke of Mickey Mantle’s candidacy coming from being someone “who was such a hero to so many and a hobby ambassador to early card shows drawing people in to rediscover their youth.” Other player nominations included Dmitri Young and Wayne Gretzky — but not for their appearances on cards as players. Both were collectors; Gretzky’s 7-digit purchase of the T206 Honus Wagner card legitimized both third party grading and collecting as an investment, while Young’s high-grade rookie card collection brought in $2.4 million and raised the profile of high-grade, high-dollar post-war cards and increased value across the board.

However, those opposed to players making Mount Rushmore also have valid arguments to support their viewpoint, namely the argument that the players aren’t really all that involved in the sports card world. One opponent said, “I don’t think athletes belong. Yes, they’re important because the hobby is mostly about promotional items they’re on, but few had any real involvement besides posing for a photo.” Another noted that while individual players are collectible, “there is also demand every year for that one weird card that gets out and causes a frenzy of people who think it will remain hot in five years. Can’t see putting Billy “#>¢% Face” [Ripken] on any list just because his card was hot at one time.”

The argument can continue even when weighing players against the criteria noted in the original post. As a refresher, the criteria are:

Those in favor of player enshrinement argue that the players did indeed have a huge impact on collecting, and were of great long-term importance to the industry. Because they were on recognizable cards, they brought favorable attention to the industry, and because the cards are popular and valuable, the players have a favorable view from the industry. Many of these players are true industry icons because of the iconic cards on which they appear.

However, others see things differently. If Mickey Mantle were not included in the 1952 Topps set, they argue, surely another player would have gained the traction of Mantle’s card. After all, the absence of Ted Williams in 1952 and 1953 Topps never hurt the value of those sets. The definition of “favorable” also started a debate, with one commenter noting, “Mickey Mantle who was a jerk to collectors at card shows for years? No way.”

In the end, there is definitely passion on both sides of this issue. However, there isn’t a “player’s wing” or individual player slot on Mount Rushmore — just 4 slots, open to whoever the 4 most impactful hobby figures are. This debate is likely to rage on until, and even after, the final four members are revealed. What do you think — do players deserve to be on the Mount Rushmore of Sports Card Industry Icons?

Remember, if your submission matches the list of the final four inductees, your name will be entered into a drawing to win $100 in sealed wax from Big League Cards! Be sure to vote by visiting Big League Cards in Casselberry, Florida; commenting on this blog post or Facebook post; or emailing mountrushmore@bigleaguebreaks.com.