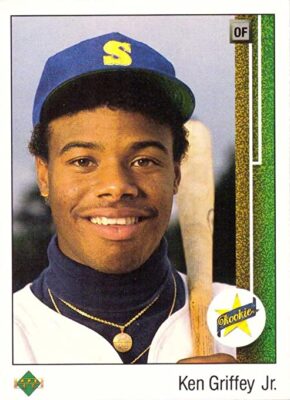 T206 Honus Wagner. 1933 Goudey Babe Ruth. 1952 Topps Mickey Mantle. Since the sports card hobby began in its current iteration, these cards and many others have had iconic status, instantly recognizable to anyone in the hobby, and to many non-collectors as well.

Some cards are instantly iconic from the day they are released. Many that fall into this category are rookie cards, such as the 1986 Fleer Michael Jordan and the 1989 Upper Deck Ken Griffey Jr., while others are errors like the 1989 Fleer Bill Ripken “Rick Face” error and the 2007 Topps Derek Jeter error with George W. Bush and Mickey Mantle in the background. Still others are instantly seen as iconic due to the image; most recently, this happened in 2020 Topps Update, when a photo variation short print of Andrew McCutchen took the hobby by storm.

There are also cards that steadily become iconic over time, even if they didn’t have that status immediately upon release. Some are rookie cards of players who went on to become all-time greats, like the 1993 SP Derek Jeter foil rookie or the 2011 Topps Update Mike Trout rookie. These cards had a gradual climb into the upper echelon that coincided with their subjects’ ascent to greatness. Other cards, like the 1953 Bowman Pee Wee Reese and 1971 Topps Thurman Munson cards, get recognized over time for being unique (in this case, the first posed action shot and first in-game action shot, respectively, as the main photo on a card).

Lately, however, there have been cases of cards becoming iconic seemingly overnight, a wild departure from the traditional norms of the hobby.

The first card this happened to had a pretty good reason behind it. At the end of 2018, a savvy internet sleuth found that the background of a 1990-91 Hoops Mark Jackson card appeared to show patricidal brothers Lyle and Erik Menendez sitting courtside at Madison Square Garden. With the knowledge that courtside seats were one of the many things the brothers splurged on after inheriting their parents’ money (and shortly thereafter, confirmation from Lyle that the photo did indeed show them), the common card went through the roof and at one point was banned for ebay for its association with murder. Though its price has dropped significantly, the card is now iconic.

In August 2019, an ESPN story by Robert Sanchez highlighted a minor league 1989 ProCards issue of Keith Comstock that was staged to look like the pitcher was getting hit in a sensitive area. The story got picked up by other major outlets and the common card of a fairly unsuccessful middle reliever jumped to over $100 before settling back down, but still sells pretty well.

During the last few months, there have been a few cards with less of a story that have taken off without expectation. The first is Kobe Bryant’s base card from 2008-09 Topps. The card features Bryant being guarded by Lebron James, and as one of the few base cards featuring both players, the card took off, along with its Chrome counterpart. Last summer the card skyrocketed and I cashed in at $72, shaking my head in disbelief that a base card could net me so much money. It now routinely sells between $400 and $500. 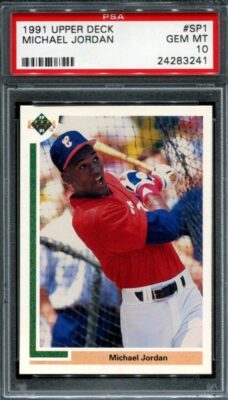 The 1991 Upper Deck baseball card of Michael Jordan has shared a similar trajectory. Number SP1 in the set was a tough pull, and as a kid collecting in the 90s it was a cool card to have, but certainly not iconic. The card is now everywhere, with MJ stans loving his first card in a White Sox uniform, even before he officially hung up his sneakers for cleats. Formerly a $2 card, I cashed mine in for 10 bucks back in July. It’s more like a $30 to $40 card now, but PSA 10 examples are among the hottest cards in the hobby.
Bo Jackson was hot when I was a kid, but in my circle of friends, we all loved the 1991 Score card labeled BO BREAKER, which featured the two-sport star doing what he did best: breaking a bat over his knee after a strikeout. My friends and I loved that a card showed the frustration of a player rather than the jubilee of one hitting a homer or the excitement of looking for a fat pitch across the heart of the plate. The 1990 Score card, a black and white image of Bo holding a bat behind his back while wearing shoulder pads, wasn’t very interesting or exciting. Turns out, the market disagrees; the 1990 Score Bo Jackson has had a steady climb over the past 6 months or so to the point where nearly every collector seems to want one.
So, it seems to me that cards can become instant icons even after three decades of being a “common.” In some cases, a national story might be needed. In others, nostalgia needs to tug at heartstrings just enough to create palpable excitement about a card. But in all cases, once a card reaches that height, it’s there for good. Even if prices back off on the Jordan or Bo Jackson, like they did on the Comstock and Mark Jackson, collectors will always remember and identify with the period of time they were hot items.
It’s anyone’s guess as to the next junk wax era card to become an overnight sensation.