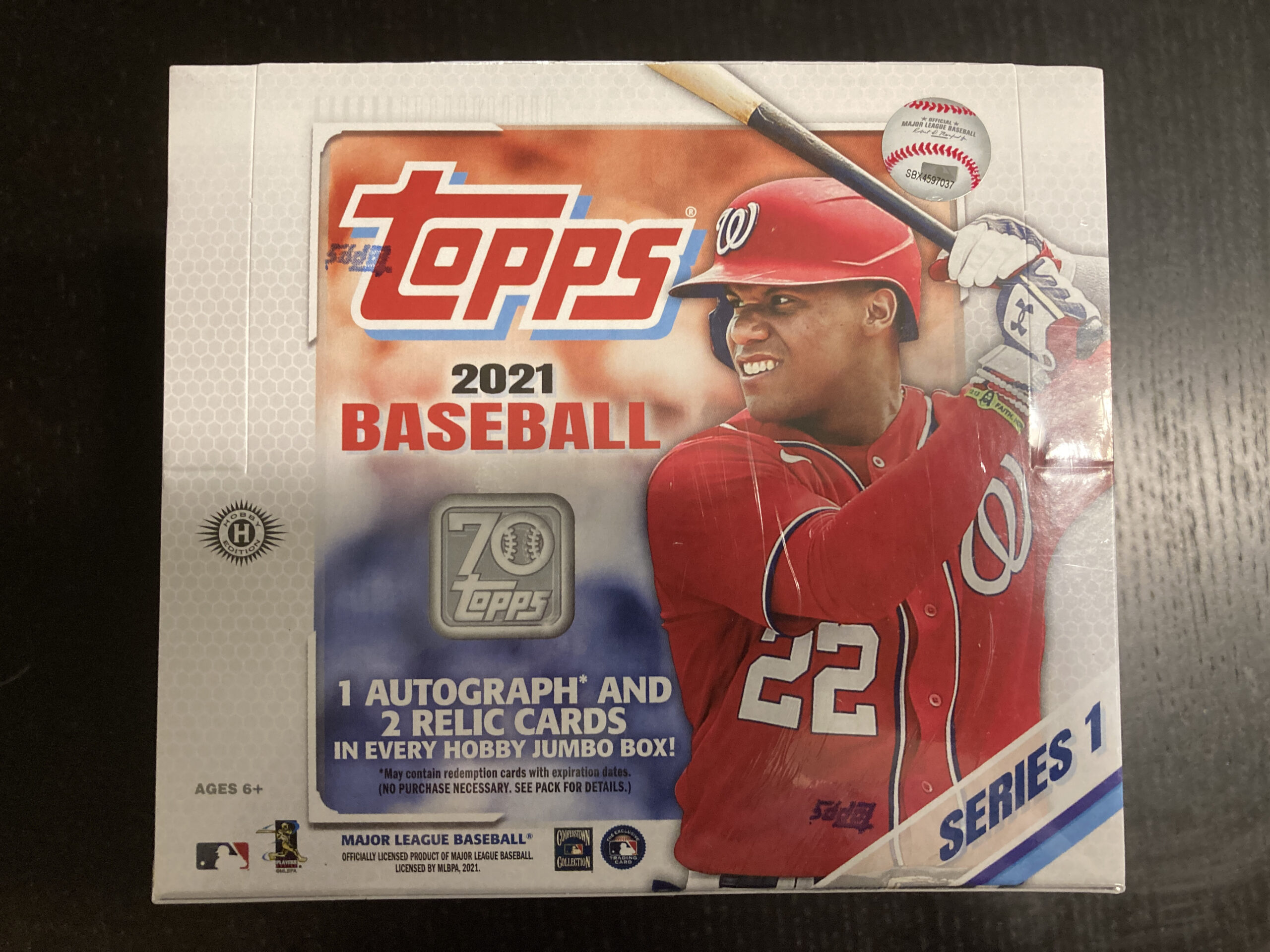 Every card collector’s favorite day of the year arrived last week, as the flagship Topps product, Series 1, hit stores. Series 1 offers collectors the first chance each year to build a complete set and chase the hottest rookies. Due to the shortened season in 2020, most top rookies did not appear in 2020 Topps Update, leaving this year’s Series 1 rookie class one of the most robust in recent memory.

I opened two jumbo boxes of Series 1. Each jumbo box comes with a boxloader and two silver packs. The boxloader is in the style of the 1951 Topps All Stars, one of the first sets in Topps’s baseball card history. Silver packs contain 4 “mojo refractor” cards in the style of 1986 Topps. While I didn’t get any, numbered parallels and autographs are possible from these packs. This year’s theme is the 70th anniversary of Topps, and the theme permeates the product in many ways. Each base card has a silver 70th anniversary stamp in the corner, rather than the traditional Topps logo. With borders returning for the first time in several years, mock-ups looked like the stamp might make the front seem crowded, but that was not the case at all and the stamp worked perfectly well with the design. Player and team names appear in a small banner at the bottom, and while the font was smaller than I might have preferred, I would rather see more photograph than name on card fronts, so I didn’t mind the unobtrusive nature of this design element. Parallels I pulled includes the traditional gold and black, along with the more recent additions of rainbow foil and gold foil. Other parallels, like clear acetate, Independence Day, printing plates, and so on are also available. Photo variations return in the form of shortprint, super shortprint, and, for the first time, super super shortprint cards. I was lucky enough to pull a Jo Adell shortprint in my box, a hot card for one of the top rookies in the set. The 70th anniversary motif was carried through to most of the insert sets. I’ve mentioned in many reviews in the past that I’m over traditional reprint cards, which the company has trotted out over the years in sets like Berger’s Best, 60 Years of Topps, Retro Rookie Reprints, and so on. I was worried that the 70th anniversary might produce more of the same, but Topps was able to put quite a nice spin on the reprint-type cards this year. Double Header cards are two-sided cards that feature the first and last regular issue Topps card for iconic players, like the Reggie Jackson and Nolan Ryan ones I pulled. Topps Through the Years shows reprint cards of various sets, like Museum Collection and Dynasty. I loved this, but there were some negative reactions to this insert set online as unseasoned collectors seem to have thought they were pulling legitimate autograph or 1/1 cards, despite the clear legal statement on the back. Platinum Players inserts are also attractive, with some of the best players appearing on a die-cut number 70.

My favorite, favorite insert set – maybe ever?! – was the 70 Years of Topps set, which features anachronistic players on old Topps designs throughout the years. This is something Topps employs each year in its Archives product, but limits to just a few designs. This set has one of each year of Topps, and some of the cards look so legitimate I had to do a double take and look to see if they actually existed. Something about this set looks so much better than the similarly-themed 2010 Topps Vintage Legends insert from a decade ago. I’m not quite sure what it is, but Topps knocked it out of the park with this set.

Jumbo boxes come with one autograph; each of my autos was of the 70th Anniversary variety, and one was a numbered black parallel. I quite liked the manufactured relics I got as well, which were Spring Training Cap Logos. It always amazes me that Topps comes up with different ideas for these relics each year.

Each jumbo box yielded a complete 330 card set for me, plus a pile of extras. While the price has increased this year over past years, it’s still tough to beat in terms of the sheer number of cards, complete sets, inserts, and parallels. This year’s rookie class is loaded, too, with tons of top prospects having made their debuts last year. Opening Series 1 is a ritual for me that I’ll never give up, but even if it’s not part of your annual tradition, I suggest picking up some packs or boxes this year and hoarding some of the rookies.