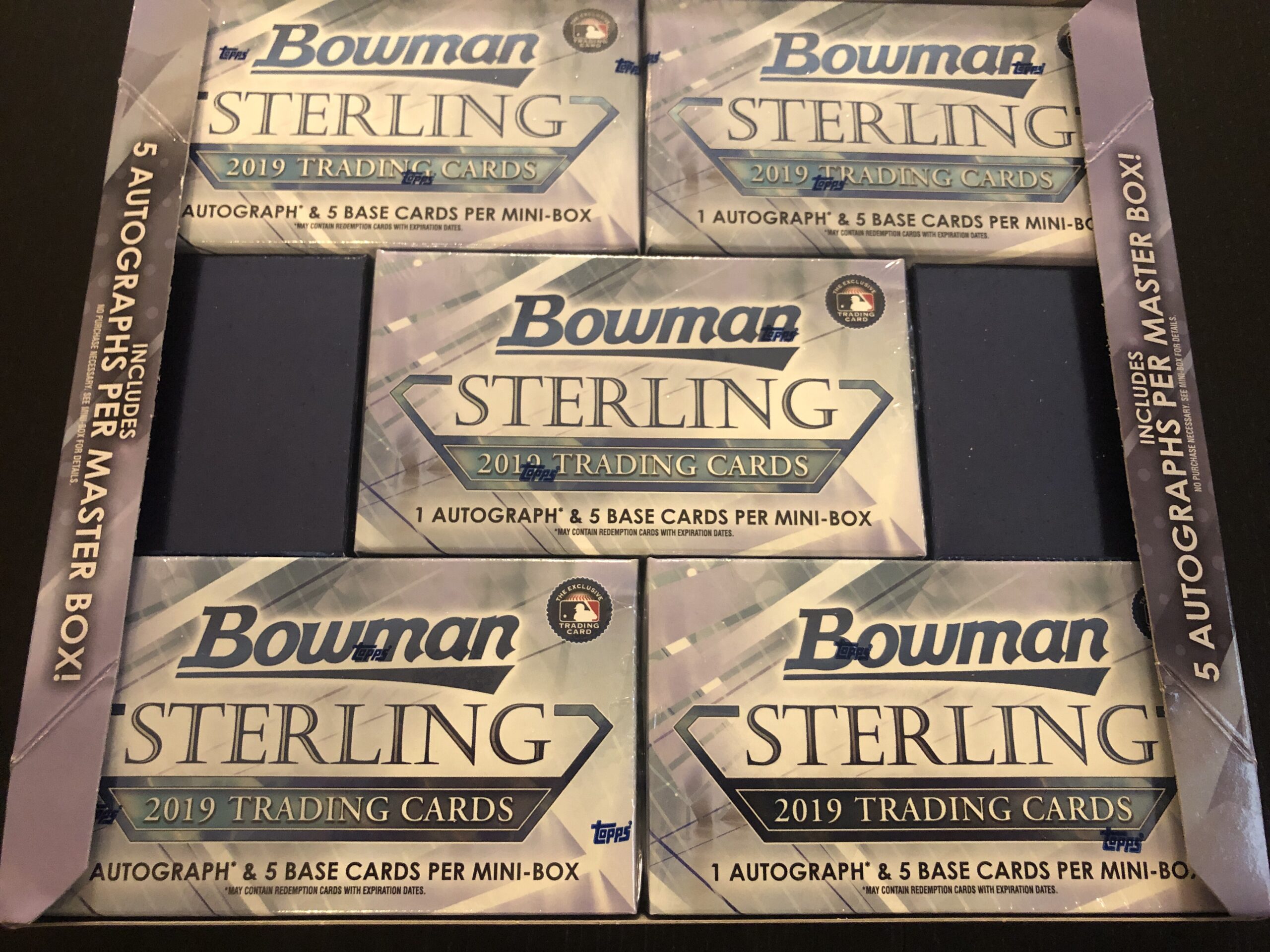 After a half-decade hiatus, the rookie- and prospect-centric Bowman Sterling stand-alone product has returned. After such a long layoff, I’m excited to say that Topps got this product right in a big way.

.com/wp-content/uploads/2019/09/img_4925-533×400.jpg” alt=”” width=”533″ height=”400″ />Sterling has popped up as an insert set in regular Bowman the past couple years, and the designs have been great, but that’s nothing compared to the higher-end product line that was first introduced in 2004 but had fallen out of favor by the time of its discontinuation in 2014. Topps sent me a master box of Sterling to review. Master boxes come with 5 mini-boxes, and each mini-box contains an autograph.

Packaged neatly and arranged like the pips on a standard six-sided die, each of the mini-boxes is individually wrapped, and inside each mini-box is a foil-wrapped pack. In other words, you have to work to get your cards out. Once you put in the effort, it’s entirely worth it for the payoff. The card design is beautiful, definitely befitting of a high-end price tag, and a lot cleaner-looking than the cluttered designs of the final years of the products first run. The checklist is excellent as well, featuring tons of top prospects and rookies in high current demand, as well as exciting parallels.

I was thrilled with my box right off the bat, as I received rookie cards of both Fernando Tatis Jr. and Vladimir Guerrero Jr. in the same pack. Autographs carry the same design as base cards, and the first autograph I pulled was a former Florida Gators great and Kansas City Royals first round draft pick Brady Singer. First round picks are always great to pull, but when they came from your favorite college baseball team, they’re even better. I followed this up with an autograph of Luken Baker, a former second-round pick of the Cardinals who has stalled a bit this year in high-A but has raked at every stop previous to his Palm Beach assignment. 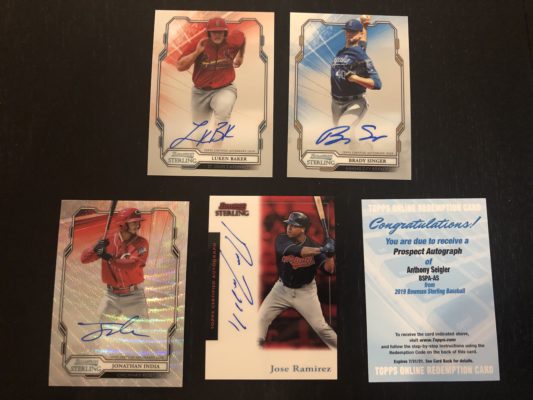 My third pack had a redemption peeking out of the middle. A feeling of unbridled excitement came over me. A redemption in a high-end product like this usually means a big hit. Unfortunately that wasn’t the case, as the redemption was for a base autograph of Anthony Siegler, a catcher in the Yankees organization who literally didn’t hit his weight this season (.175 vs 200 pounds). I have to admit, this was a bit of a letdown.

The next two packs more than made up for it, though. I received a Retrospect autograph of Jose Ramirez, done up in the 2004 design. It wasn’t until I flipped the card over that I realized it was a red refractor, numbered out of five copies. The original 2004 autograph design was simple, clean, and beautiful, and is what set the stage for a successful run of this product in the first place. Topps did a great job replicating that design for this insert set. In my last pack, I got a wave refractor numbered to 125 of Cincinnati Reds top prospect Jonathan India. Not only is India a former first round pick, he is yet another former Florida Gators standout. Two Gators in one box? Don’t mind if I do!

Besides autographs, I did get two parallel cards. I received a gold refractor rookie card of Braves hurler Kyle Wright, numbered to 50. I also got a regular refractor number to 199 of rangers prospects Julio Pablo Martinez. With a card design so clean, the refractors were bound to be attractive, and indeed they were.

Secondary market prices for boxes have increased since the release date, and prices for singles have been impressive as well. If you are into prospecting, collecting rookie cards, or just opening a beautiful product, grab some Sterling.