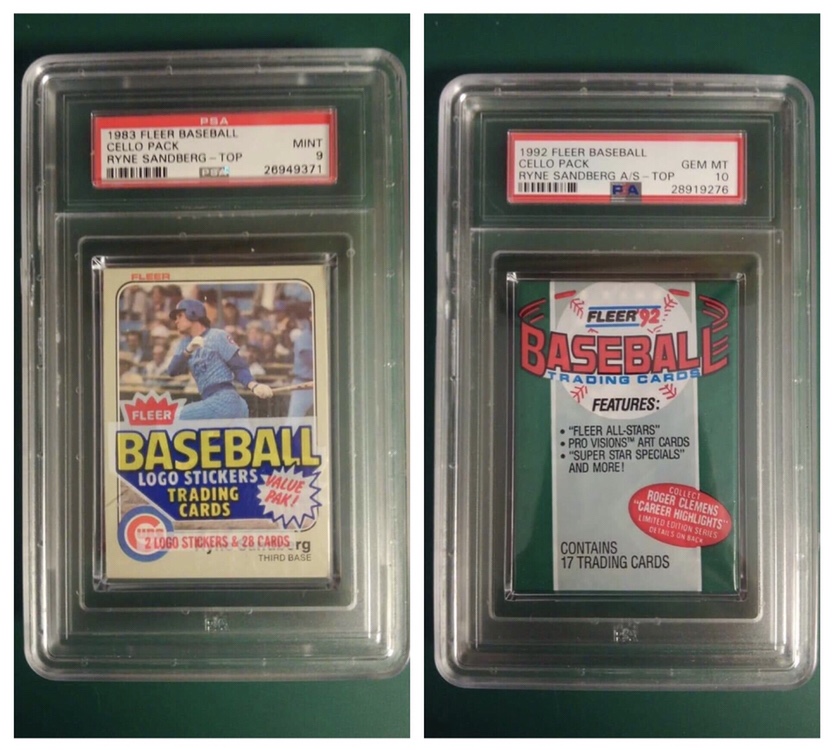 Most collectors spend time opening packs. For collector Aarron Minson, his endeavor is finding packs that are still sealed. Minson collects any sealed pack with his favorite player, Ryne Sandberg, visible on either the front or the back. Then he gets the packs graded by PSA to add to his collection.

I first met Aarron a little over a year ago in a Facebook group where he was looking to add to his unique and impressive group of packs. This was around when, as he put it, he “abandoned all other collection endeavors to focus on Sandberg packs.” I’d heard of people collecting packs featuring their favorite player, but never on the scale Aarron does, and never all PSA-graded. Last year, I was even lucky enough to add one pack to his collection — a shocker to me, as he already has most packs I run across.

Like most collections, Minson’s started out small, and grew from there. “I limited myself to rookie year (1983) items at first, but someone approached me with a PSA 9, 1984 Fleer cello with Sandberg on top that I couldn’t resist,” he explained to me. “That really opened the floodgates for me and led to a more inclusive approach to the collection. Now all unopened packs featuring Ryne Sandberg are fair game.”

You might think that a player who appeared in just 15 seasons may not have that many unique items…but you’d be wrong. Minson says he has “90 unique and unopened cello, wax, rack, and oddball packs featuring Ryne Sandberg” in his collection.

With so many items in his collection, Minson admits that it’s tough to pick a single favorite item. There are a few that stand out to him, though. “My 1983 Topps grocery cello (PSA 9) is up there. It’s a rarer item for the era, and always reminds me of the card that started it all for me in this hobby: a Ryne Sandberg Topps rookie my dad bought for my 9th birthday.” In keeping with the out-of-the-ordinary theme, Minson added, “I’ve also become very fond of the 1991 Topps Cracker Jack prize pack that I have. To me, unopened star packs in general tell a story. This one was packaged in a box of caramelized popcorn, and someone resisted the urge to open it for almost 30 years, even with the obvious star showing. It wound up grading a PSA 10, which is a pretty remarkable conclusion of the story to me.”

Despite the large number of issues he owns, some packs continue to elude Minson. “In particular, a 1985 Fleer cello with Sandberg on top, as well as one with the Sandberg/Mike Schmidt card on top.” And though he hasn’t run across anyone with a collection as thorough as his, Minson knows collectors who operate in the same general niche space. Despite the fact that they may often need the same packs to complete their collections, Minson says there isn’t a level of competition between them, adding that “we look out for each others’ interests and revel in each others’ success.”

The sentimental value clearly wins out over the monetary value in this collection, but even still, Minson’s goal is completion, and therefore, he has no one pack more sentimental than the others. As he told me: “I can’t pick just one!”

Minson’s quest not only positions him as a Sandberg collector; he also sees his collection as one that memorializes the height of the card-collecting market. “I’m surprised to find that this collection has become as much about assembling and preserving a thorough representation of junk era products as it is a player collection,” he explained. “Viewing myself as both a curator of junk wax and a Sandberg pack collector has really invigorated me to press on!” For Minson, one man’s junk-era wax is certainly his treasure.