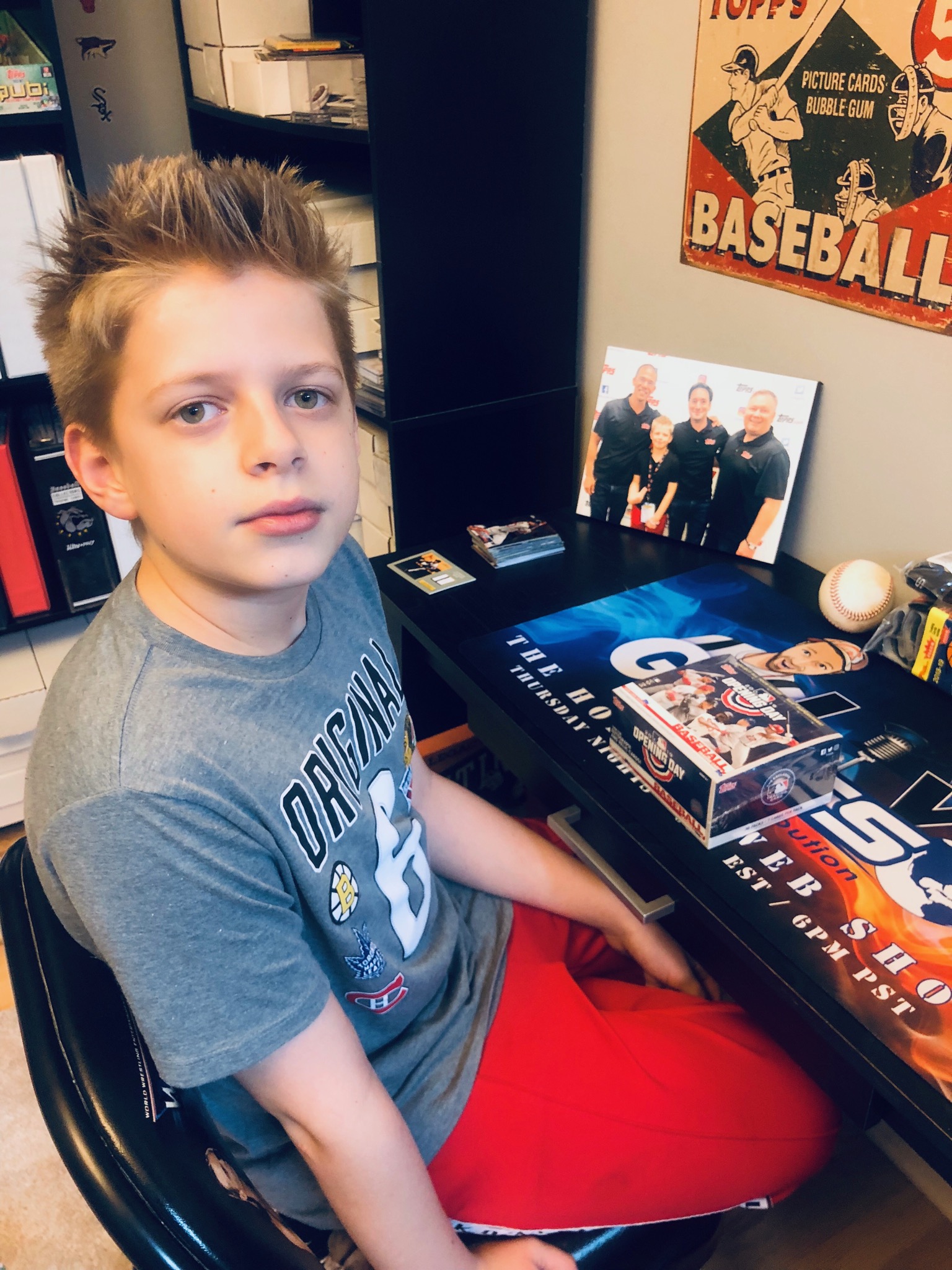 Hey guys, welcome to another edition of Riiip with Brody the Kid!

This month we will be talking about how excited I am for the new MLB season, some fun stuff I was able to do at a collectors’ show and a couple other things.

So, first…I am hyped for the new MLB season! Ichiro has retired after the International Series between the Mariners and the A’s. The Mariners won both of the games, but the second game went to 12 innings, making it the first extra inning game of the year. At the same time, Topps Opening Day cards came out!  This is a great product for kids for several reasons. 99 cents for a pack with 7 cards. There are mascot cards, which are super cool and fun. If you get lucky, you may even find a mascot autograph or relic card! There is also an insert set called “150 Years of Fun” showcasing all the great players of the 150 years of baseball.

Next, I would like to talk a little bit about a card convention I attended, the Chicago Sports Spectacular. It was not as big as The National, but it was a really good size show with at least 6 or 7 large rows of tables. I got some really good deals and it was a lot of fun.  Were any of you there? When I was there, I was able to meet James Toney and Joe Charboneau, which was super cool. 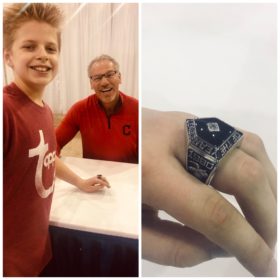 I got to meet and talk with Joe Charboneau first. He was an outfielder and designated hitter with the Indians, and also won the AL Rookie of the Year in 1980.  He said that he collected cards when he was a kid and remembers having Mickey Mantle cards and a lot of Willie Mays cards, since he grew up in California.  Unfortunately, he said “Yeah, I collected them, but I made the big mistake of putting them in my spokes!”. ☹  He also said, “I was in little league in 1962 and saw Willie Mays.  I was a Giants, A’s and Detroit Tigers fan growing up.”  Joe said he still does work with the Indians now. I thought it was cool that he said, “I still collect. We go to fantasy camps and get autographs.”  He even let me hold his Rookie of the Year ring for a few seconds!  He was really nice!  I would love to talk with him again some time. 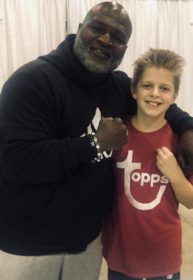 Next, I was able to meet and talk to former world champion boxer, James Toney.  He was an amazing boxer and won multiple titles at a range of weight classes from middleweight all the way up to heavyweight.  He was also named Fighter of the Year by The Ring Magazine in 1991 and 2003!  When I met him, he shook my hand for what seemed like an eternity!  I swear I thought my hand was going to fall off!  He is super strong!  He was really nice and wished me luck with my blog!  I asked him if I could use this for my blog and he said, “Yes, but if you make $100,000, you have to split it with me!”  LOL.  I hope to be able to see him again at another show.

It was a lot of fun being able to go to a show with a lot of cards and memorabilia to look at and also meet and see some professional athletes!  It has me excited and ready for The National this summer!  It will be the 40th ever National so it should be the best yet!

Who is excited for WrestleMania?!  I can’t wait for it.  Here are my Top 5 favorite wrestlers right now and who I am looking for in my packs.

Honorable Mention:  Drew McIntyre – Keep an eye on him.  He is a beast, but he has a bad temper.  I hope Roman Reigns dominates their match at WrestleMania!

Who are your favorite wrestlers right now?  Which wrestler’s card do you hope to find in your packs?

Thank you for reading this month’s edition of Riiip with Brody the Kid!  I also wanted to give a shout out to Curtis J. who sent me a pic on twitter with his report card.  Congrats Curtis on the awesome grades and for being “Topps of the Class”!  Way to go!  I will see you all next month after Opening Day and WrestleMania!!!