I recently saw this meme on a baseball card Facebook group. Using a popular meme format based on a Family Guy scene, it shows the 1989 Bowman Ken Griffey, Jr. rookie card wondering why it’s less popular than its Fleer, Donruss, and Upper Deck counterparts. 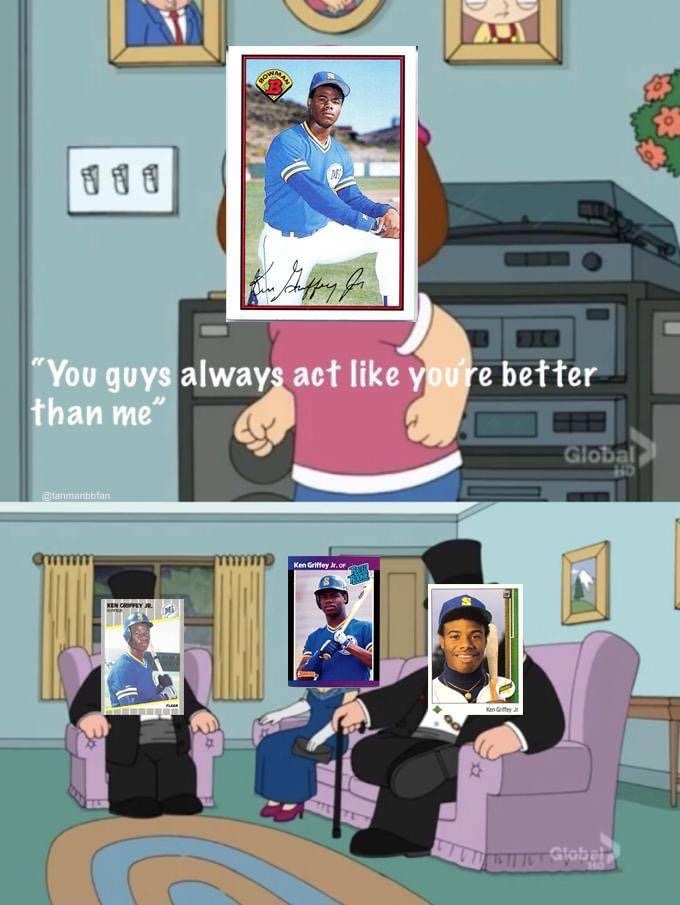 I got a good laugh out of it, but then it got me thinking: why is the Bowman card so much less desirable and iconic than the others? The Topps Griffey rookie is not included in the meme, and that is no surprise; in a notable whiff for the major card manufacturer, Topps did not include the eventual rookie of the year and Hall of Famer in its base set, instead having him appear in its Topps Traded box set issue. But the lack of respect for the Bowman card makes less sense on the surface. The 1989 issue was the first Bowman set since 1955, when Topps bought out and shut down its main competitor. With Bowman being known as the brand for rookie cards, one would expect that the rookie card of one of the most popular players of the 90s would carry more weight than it actually does.

The popularity of the Upper Deck card makes perfect sense. As a new entrant into the baseball card market, the 1989 Upper Deck set was the first to feature glossy cards and a counterfeit proof hologram on the back. On top of all the bells and whistles, Griffey was card #1 in the set, so when The Kid became a sensation, the card became iconic.

With Upper Deck and Topps explained away, the question really becomes why Bowman is less popular than Fleer and Donruss when it comes to Ken Griffey Jr. rookies. I believe there are two possible reasons for the disparity.

The first is simply timing. Generally speaking, card manufacturers release their sets towards the beginning of the season. For example, 1989 Upper Deck was released in April of that year. While I can’t find release dates for Fleer and Donruss, it is likely that they were also in the first few months of the season. I was quite surprised to find that Bowman, however, was not released until July of that year. One indicator on how much later Bowman came out than its competitors is a contemporary quote from John J. Langdon, who was the then-President of Topps: “The 1989 Topps card has a picture of Nolan Ryan with the Houston Astros but Bowman is the only major set in the country that has Ryan in a Texas uniform.” With the season already half over, it’s quite possible that the Fleer and Donruss cards simply had more time to enter the public consciousness as Griffey was gearing up for his ascent to stardom.

A second reason, which I think is more realistic, is size. While the Fleer and Donruss cards are standard baseball card size, 2.5” x 3.5“, Bowman’s return to baseball came with a return to its original size of 2.5” x 3.75”. As anyone who has dealt with these larger vintage cards, or with 1989 Bowman Cards, can tell you, cards of this size tend to be unwieldy. They don’t fit neatly in nine pocket pages, top loaders, cardboard boxes, snap cases, or semi rigid holders. Given that the 1990 release saw Bowman move to a standard card size, it’s clear that this large format was not well received, and that negative perception would also spill over into the Griffey rookie.

The confluence of these factors means the 1989 Bowman Griffey rookie is often overlooked and undervalued. At the end of the day, it’s a rookie card of one of the greatest players to ever play the game. Whatever the reason that makes it less appreciated than the others, the end result is a good deal for anyone looking to buy a rookie card of this all-time great Hall of Famer.