Always one of my favorite products of the year, 2021 Topps Heritage Minor League is also one of the most affordable. This year, the product packs an added punch with two on-card autographs promised in each box. 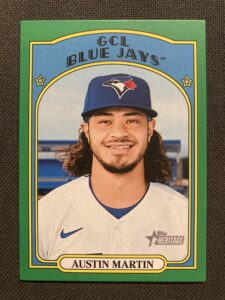 As a hobby-only product, you’ll only find Heritage Minors in one configuration. Hobby boxes come with 18 packs per box and 8 cards per pack. With 200 cards in a base set, two boxes should, in theory, get you a complete set. That said, I opened 4 boxes and only had 1 complete set, 1 partial set, and a bunch of doubles and triples.

One card in each pack is a parallel, insert, short print, or variation. Short prints come 3 to a box, on average, and are “high number” cards with numbers from 201 to 220. Photo variations are tough — I didn’t pull any in my four boxes. Parallels come mostly in the form of colored borders and land roughly two per box. Across the four boxes I opened, I pulled 3 blues (#/99), 1 green (#/75), and 2 blacks (#/50). I also received one flip stock variation (#/25), in which the front is rough and the back is glossy.

An additional parallel I pulled came in the form of a blue border autograph of Twins prospect Yunior Severino. This was the only autograph parallel I received out of my 8 autographs, and it seems that it counted as both my autograph and a parallel for that box.

Topps did a wonderful job with the insert sets in this product. Boyhood Photos of the Stars is modeled after the 1972 subset of the same name, with two twists: the players featured are MLB greats, not current minor leaguers, and their inset photo is of those greats in their minor league uniforms. I loved seeing players like Babe Ruth, Willie Mays, Ken Griffey Jr., and Jackie Robinson as children and then again as slightly older children playing in the minors. The 1972 Pack Cover cards are interesting, as they feature minor league stars against the funky BASEBALL logo that appeared on the Topps packs in 1972. Unfortunately, with no information on the back and the same background for every card, this insert set fell a little flat for me. 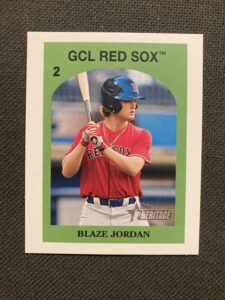 That’s okay, though, because the final insert set, Venezuela Stamps, blew everything else out of the water. Modeled after a non-Topps product, the 1972 Venezuelan Winter League Stamps, these inserts are minis with a simple design. As an oddball vintage collector I absolutely loved this homage to a non-mainstream set not many people know about. In that vein, the 3-card boxloader pack that came in every box also paid homage to a lesser-known set, 1972 Topps Posters. Though they shrunk them down to standard card size, these cards used the full-bleed design of their counterparts from ’72 and looked dynamite. I’d love to see these autographed — maybe they’ll show up in next year’s Archives Signature Series.

Like another one of my favorite products, Topps Pro Debut, Topps Heritage Minor League consistently gives collectors the chance to open a bunch of packs and get multiple parallels and autographs without breaking the bank. For the price of one box of Bowman you can buy 3 or 4 boxes of Heritage Minors. The resale value will never be the same, but you have access to many of the same hot young players. It’s a fun product to open for set builders and prospectors alike.