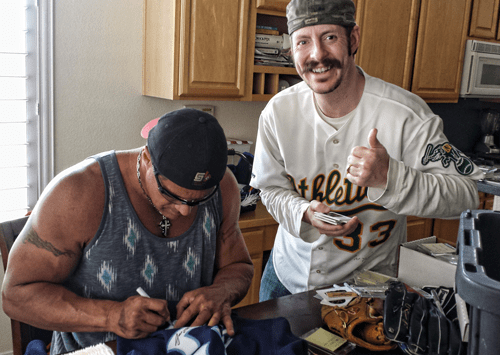 This weekend, the online cardboard community got some surprise news: one of the Internet’s most popular supercollectors, Tanner Jones, announced his decision to quit collecting Jose Canseco cards. In just over 5 years, Tanner amassed such an incredible collection that he met his childhood idol, got a feature in Beckett magazine, and became such a household name that breakers and ebay sellers would call him out by name on tough-to-find Jose Canseco cards.

To say I was shocked when I read this is an understatement. I’ve known Tanner online through some baseball card message boards for over 6 years — I actually remember when he was just starting his Canseco collection! With his incredible collection, devoted fanbase, and immense popularity, I couldn’t understand why he’d stop collecting Canseco cards.

The first thing I did to rationalize his decision was to think about my own collections. I realized that there have been many collections I’ve started and paused, or started and completely stopped, or started only to turn around and sell it. None of these collections were on the scale of Tanner’s, but I could still at least relate to the notion that some collections must end. But why? For me, there were any number of reasons, changing depending on the circumstance. I stopped collecting Mark Kotsay because he got traded from the Marlins; I stopped collecting Hanley Ramirez because his cards got too expensive at the time; I stopped collecting T206 Brooklyn cards because it got too overwhelming with all the back variations.

The second thing I did was to go straight to the source and ask Tanner some questions. Thinking again about my personal collections, I recognized that I had limits that I set for myself — for example, I won’t spend more than $40 on a 1/1 non-signed printing plate. I figured that maybe Tanner could have benefitted from limits, if he didn’t already have them. It turns out, he didn’t think they’d have helped at all. “I am not sure if limits would have helped me,” he said. “Being that the problem was the amount of brainpower it took up, maybe my head would have still been filled with cardboard, if only just my limits. I do recommend limits to folks though, just from a financial perspective. One thing to keep in mind is that no one can have everything.”

Then I thought that perhaps a lower profile might have helped Tanner’s longevity in the industry. I supercollect two players but operate in relative anonymity, so people don’t have the ability to drive prices up specifically for me. Tanner did seem to agree with this when I asked him, noting, “I think I would have stayed longer if I were more casual about it. The problem is, I’m not a casual guy when it comes to something I’m passionate about.”

Mostly, though, I was interested in how he decided it was time to end his collection. His personal blog post (linked above) goes into a good amount of detail on the subject, so I don’t need to rehash that here. But I did ask Tanner what advice he could give to someone who isn’t certain whether or not to end a collection. I wasn’t sure he’d have any, but I was met by him exclaiming, “This is my favorite question!” He continued: “My #1 hope is that my story helps others who may be in trouble. I was never “in trouble”, so to speak, but I know MANY are in a troublesome spot due to overindulging, be it cardboard or even other things – food, drugs, drinking, gambling, etc. If you feel like it would be a positive life change for you to step away, then have courage and do it, in spite of nagging questions like “but I have so much money in this…I can’t stop now!” That is a terrible reason to stay. In the long run, it will likely prove to be a very healthy move. As I mentioned before, I’m happy to talk it through with anyone who may be facing a dilemma like this. It simply isn’t talked much about the hobby, but should probably be discussed more.”

I’m in a place now where I’m very happy with the collections I have going, but I’ve been known to change my mind on that. If I ever reconsider one of my collections, I’ll be sure to take Tanner’s words to heart, and have the courage to step away.