Blaster box. Hobby box. Jumbo box. What does it all mean? While most people love opening packs of cards, the boxes that hold those packs come in different variations, which can be confusing to new collectors or to people who don’t frequently purchase boxes. This guide will help you differentiate between the various box configurations a product may have. It’s important to note that it is not necessarily the case that every product will come in all possible configurations. I have illustrated nearly all of the examples using the same product, 2021 Topps Chrome, with a few exceptions because that product does not come in those configurations. 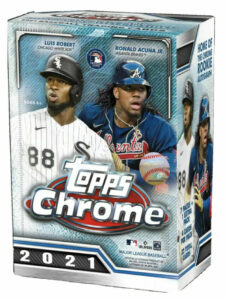 A blaster box is a small box of cards that is typically sold at retail establishments such as Target and Walmart. Blaster boxes typically contain a small number of packs; depending on the product, there could be as few as 4 or 5 packs or as many as 12 to 15 packs. Often the packaging will advertise an “extra pack“; this is often used to note the value that you get by buying a whole blaster box as opposed to purchasing individual packs. For example, if packs of a product cost four dollars each and a blaster box costs $20, the packaging may advertise “five packs plus one extra pack.“ This is intended to show the purchaser that they are getting six packs for the normal price of five packs. On occasion, blaster boxes also include a bonus pack that may have special parallels or inserts unique to retail products. 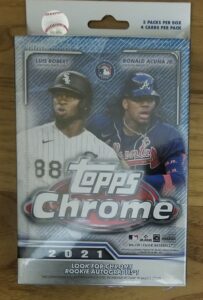 Named because they are designed to hang from a hook rather than sit on a shelf, hanger boxes often contain only two or three retail packs inside. Sometimes hanger boxes will also have a bonus pack of retail-exclusive cards. Like blaster boxes, these are intended to be sold at retail establishments. 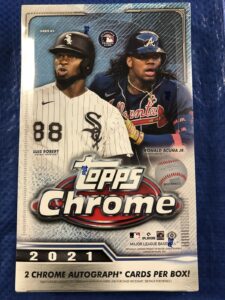 A hobby box is the standard that most people mean when they discuss a box of cards. Hobby boxes typically contain a larger number of packs and are intended to be sold in local card shops and from online distributors rather than at retail establishments, though some products do see hobby boxes being sold at retail stores. A hobby box typically has better odds at pulling better cards than retail products like blaster and hanger boxes. 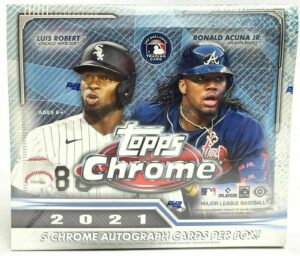 A jumbo box is a larger version of a hobby box. Rather than having more packs, jumbo boxes typically have fewer packs with many more cards per pack. Jumbo boxes generally offer the best odds of all boxes, and are usually the most expensive configuration. They also tend to promise more autographs than a hobby box. 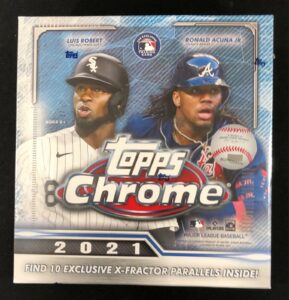 Mega boxes are retail-exclusive products that typically (but not always) contain more cards than a blaster box. However, mega boxes almost always contain exclusive cards, such as parallels that can not be found in any other box type. 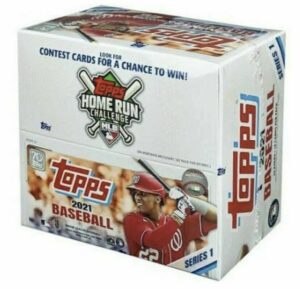 There are also some less common box configurations. These are reserved for certain product releases and are not seen as widely as the others above. 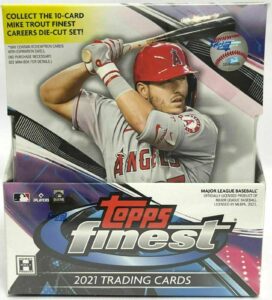 For some products, a box will actually be made up of smaller boxes, known as mini boxes (see below). In this case, the outer box is called a master box, and includes all the mini boxes therein. 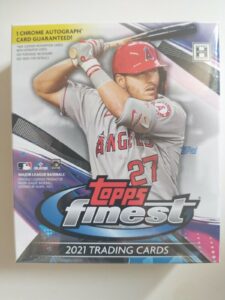 A mini box is a small box inside of a master box (see above). Mini boxes sometimes contain a single pack, and other times have several packs inside.