Despite being the flashiest base set in the Topps lineup, Topps Fire is often unappreciated due to its relative lack of big hits. That’s okay by me; the cool designs, fun inserts and parallels, and varied checklist makes the retail-only product a must-open on my list every year.

As in years past, the cards, curated and designed by artist Tyson Beck, are available in two formats, blaster box and hobby box. Both formats (despite the latter’s name) are released only at the retail store Target. When blasters went on sale, I grabbed two of them. In the past, I’ve been disappointed by the hobby boxes, which do promise hits but typically deliver with low-end autograph subjects and single color relic swatches. Blasters offer exclusive Gold Minted parallel cards, which I’ve always enjoyed in the past.

This is the type of product I refer to as “low-end loaded.” It’s filled with high-quality cards, inserts, and parallels, but because the bigs hits are few and far between, the price point is low. I haven’t built a set of Topps Fire, but it’s always tempting to. With just 200 cards, and no short prints, it’s not a difficult undertaking. The checklist is always well-curated, too, with a nice balance of stars, rookies, and retired players. It’s a balance that Panini strikes more often than Topps, but this product does it perhaps best of all.

Each pack I opened contained a Gold Minted parallel. There are also other insert sets, such as Fired Up, Flame Throwers, Rookie Ignition, and Smoke and Mirrors (are you sensing a theme?). These inserts also get the Gold Minted treatment, meaning there’s a lot of gold coming out of the packs.

While there are a wide variety of other parallels, I only got two different types in my blasters. The most common (besides Gold Minted, of course) is the Flame parallel. This is an unnumbered card with a foil finish, but that’s about the only way I can describe it. Different players show different colors in the background, and I could have been convinced that my Pete Alonso and Walker Buehler were from two completely different parallel sets: 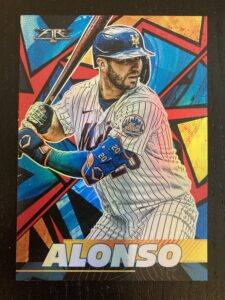 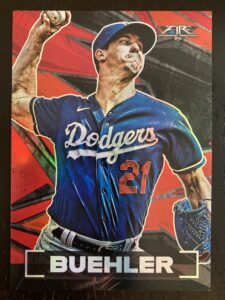 I also received two Orange parallels, which are numbered to 299. These are easier to identify because, well, they’re orange. 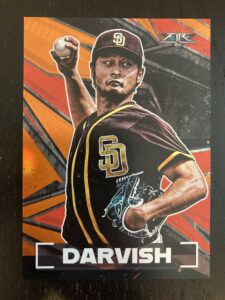 Though I didn’t receive any autos or relics, I didn’t care. For 20 bucks a blaster, it was a fun rip with lots of colorful and interesting base cards, parallels, and inserts. I’ll look forward to the next release of Topps Fire with excitement.