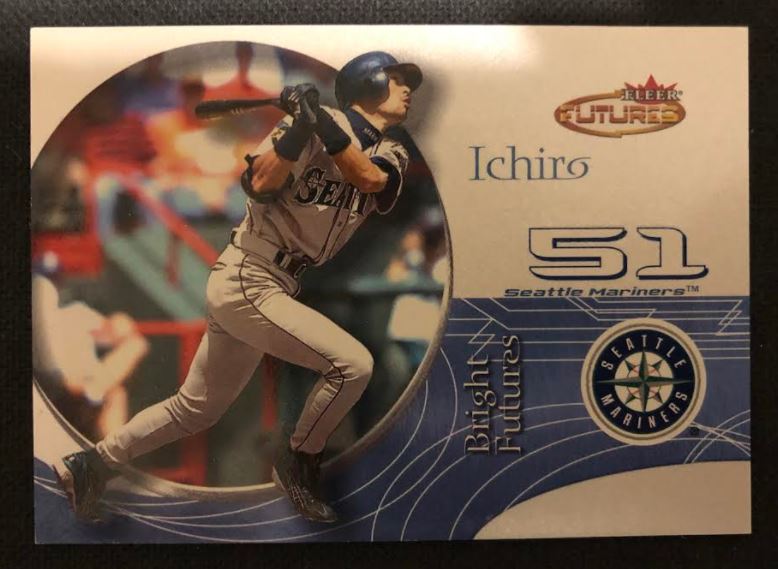 If you’ve collected baseball cards for any length of time at all, then you know the mania surrounding rookie cards of Shohei Ohtani is nothing new. Just last season, there was a similar hysteria over Aaron Judge, and in the years preceding there were similar buying frenzies for a hot player every summer. Even beyond the more recent Kris Bryant, Bryce Harper, and Stephen Strasburg hype, you can date rookie card obsession back to Hideo Nomo, back further to Jerome Walton, and further still to Fernando Valenzuela. But in 2001, something special happened. We, as baseball fans, were graced with two generational talents in one season, so we, as baseball card collectors, endured two rookie card frenzies that summer.

Ichiro Suzuki and Albert Pujols both debuted on April 2, 2001, and both won their league’s Rookie of the Year award that season. That’s pretty much where the similarities end for them. Ichiro was a pricey import from Japan, where he had starred for years and was already a sensation. Pujols was a 13th round draft pick out of a community college in Kansas City, Missouri, with one year of minor league experience and just 14 at bats above high-A ball. All of this meant that at the start of 2001, Albert Pujols cards were non-existent, and Ichiro cards were only Japanese releases, so collectors had very little supply to clamor for.

Once Ichiro posted and signed with the Mariners, the hottest card was a 2000 Upper Deck Ovation card. It was the first card of his produced by an American card company, but it was released specifically for the Japanese market, depicting Ichiro in his Orix Blue Wave jersey. But Pujols did not yet have a card, since he was a fairly low draft pick with only one year of minor league experience.

Pujols collectors were in luck early on, as 2001 Bowman included a rookie card of the young slugger. But from there, the well was dry for several months. Because Series One flagship products of Topps and Upper Deck released so early, neither contained cards of either of the sensations. Fleer and Donruss, and later Upper Deck, began to put out other products later in the year that had shortprinted cards of both players. With how high demand was, the shortprinted nature of the cards drove the price up even further. In many cases, these cards were shortprinted because the product was already in the works, and the companies needed to add these players to the products fairly quickly. But in some cases, the companies wanted to drive people to purchase the product. Famously, Fleer made several Ichiro and Pujols rookies with designs from other sets they had already released, like Fleer Futures and Fleer Ultra, and included them in their late-year release 2001 Fleer Platinum. Further quirks included 2001 Fleer Tradition rookies of both players that were available only in the factory set.

Collectors who wanted Topps products of Pujols and Ichiro were left out in the rain for quite a while. Ichiro was not under contract with Topps for several months, leading to his exclusion from products like Topps Stars, which contained a non-shortprinted base rookie of Pujols. Topps Series Two went to print too early to include Pujols, but did include a card of Ichiro. However, due to licensing issues, Ichiro’s card was unable to be included in 2001 Topps Chrome, so his spot on the checklist was replaced with a rookie card of Pujols, making it the first Topps Chrome product that did not directly mirror the base Topps numbering. Ichiro’s Chrome rookie was later included as the last card of the 2001 Topps Chrome Traded set. Bowman Chrome, long the high water mark for rookie cards, posed further problems for collectors. There was no Pujols base card – only an autographed card, which was included as a redemption. Ichiro got lucky with two cards, an English and Japanese version. But these cards were only available through a shortprinted redemption inserted at the last minute, resulting in a card number of 351 in a planned set of 350.

Why relive the summer of 2001 rookie card chase today? In somewhat poetic fashion, both Ichiro and Pujols were in the news this week. Ichiro, who debuted in the MLB at age 27, informally retired by announcing he was moving into the Seattle Mariners’ front office (but leaving the door open for playing in the future). And Pujols, still with several years remaining on his very large contract, got his 3000th hit, a milestone Ichiro already reached in 2016. All of this happened against the backdrop of Shohei Ohtani’s Bowman Chrome cards reaching incredibly high prices online, reminiscent of the chase for shortprinted Pujols and Ichiro cards 17 years ago. The marketplace has changed, but the desire for the next big thing has held steady.