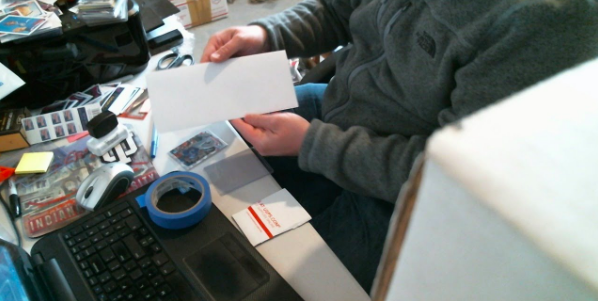 After an accidental leak about the news in early November, ebay has officially confirmed an exciting new development for buyers and sellers alike. Beginning sometime in January, sports cards and non-sports cards that sell for less than $20 can be shipped using a new method called “ebay standard envelope.” This method, which can use any envelope including a plain white envelope (PWE), will cost between 51 and 91 cents and will include free standard tracking.

The move aims to solve a huge conundrum that has plagued the sports card market for years. Plenty of people, like set builders and player collectors, want to buy cards that cost a buck or two. But with standard first class package tracking ballooning to between 3 and 4 dollars depending on location, there is little appetite to pay a total of $5 or more for a common card. Some sellers are willing to ship in a plain white envelope, a more economical option that costs less than a buck, but these sellers take on some risk. A card in a plain white envelope sent as a letter does not get tracked, meaning the buyer could claim non-receipt and receive a refund. Without tracking, the seller would not qualify for ebay’s Top Rated Seller designation, which yields higher search result placement and final value fee discounts. Additionally, the possibility of damage to the card is always a threat.

This announcement will change all of those problems. Sellers with a large amount of low-end cards will now be able to move them quickly and cheaply without having to worry about return-related issues or lack of tracking. Buyers will now be able to buy common cards without feeling pressured to buy multiple cards in order to qualify for a seller’s shipping discount.

As excited as I am for this long-awaited and much-needed change, there are likely to be unintended consequences as a ripple effect.

The ability to list low-end cards and mail them cheaply is all but certain to flood ebay with hundreds of thousands of more trading card listings. Since news leaked last month, I’ve been preparing thousands of cards to list for a buck or two once the program is officially launched. I’m sure there are many, many more like me. The more cards there are listed, the harder it will be as a buyer to find what you’re looking for, and the harder it will be as a seller to get eyes on your item.

The standard envelope experience — paying less to receive the same delivery service — is also likely to condition buyers to expecting that idea, which could be problematic for more expensive cards. Less than 10 years ago I used to charge $1.25 for shipping single cards; as the USPS increased shipping costs, I eventually had to up it to $3.75, where it is today. For many years I received low star ratings on shipping cost, despite the fact that in many cases I was losing money on shipping after taking into account materials and fees. In the last year or two I have seen that practice stop, as most buyers now understand the costs associated with it and are used to paying $4 and even sometimes $5 for shipping. Reintroducing low-cost shipping to the market could cause buyers to expect the same on more expensive cards, which may not actually qualify for this new service.

One consequence, however, may actually be intended on ebay’s part: it is my believe that this new shipping service will do damage to COMC’s business. Many people have typically used COMC to buy low-end cards from multiple sellers and combine shipping at one cost, usually around $4. This new option from ebay is likely to have sellers list their own cards for cheap, rather than sending them to COMC and paying the fees, and is also likely to cause buyers to buy directly from sellers for a lower shipping cost than COMC offers. With all the shipping and processing delays COMC has been experiencing this year, this could do some serious damage to its market share.