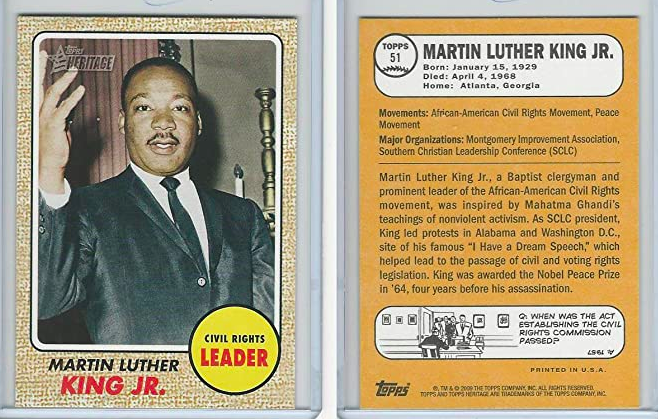 One of my hobby goals for this year was to get more into non-sports cards. There’s an entire world of card collecting out there that I’ve yet to discover, and with so much happening in the trading card world, now seems like a great time to jump in and learn about this segment I know very little about.

With today being Martin Luther King, Jr. Day, I began to wonder how many cards Dr. King had. Because I have a Topps Heritage Flashbacks card featuring his I Have a Dream speech, I knew that there were likely a few more that made their way into baseball card sets over the years. I was shocked to learn that, according to Beckett.com, MLK has just 91 recognized cards! This may sound like a lot, but keep in mind that many of these cards are parallel versions of the same card — for example, 12 of those cards are just different parallel versions of the same card in 2014 Panini Golden Age.

Not surprisingly, Dr. King did not have a card issued while he was alive. What was very surprising to me was that his first card was from a foreign set called 1973 OK VIP. Produced by Panini in Italy and distributed in Europe, the small sticker set contained a wide variety of famous people, from athletes like Jesse Owens to film titans like Alfred Hitchcock to musicians like Bob Dylan. The fronts all have brightly-colored cartoon caricatures depicting the subjects and what they were famous for.

MLK’s next card was in a set called UPI Superstars. Distributed between 1976 and 1978, these small cards appear in black and white and were put out by United Press International using its own photographs. The cards are rare but, when they do surface, don’t seem to sell for much money. I couldn’t track down so much as a photo of Dr. King’s card.

While MLK had occasional sporadic “educational” issues, such as 1979 Panarizon Story of America, he didn’t have a mainstream issue until 2005, when a single 1/1 cut autograph appeared in 2005 Topps. But in 2009, on the heels of Barack Obama’s historic victory in the 2008 presidential race, MLK’s dream became a central theme for many. Topps issued inauguration stickers for President Obama, with Dr. King appearing on sticker #9. Later that year, Dr. King appeared in 2009 Topps American Heritage with what I personally would categorize as his rookie card. This first mainstream American base card released by a major card company follows the 1968 Topps design; another card later in the set highlights his I Have a Dream speech and mimics the 1961 design.

In the years since, MLK has become a common figure in both Topps and Panini products. He made his first appearance in a football product with a stamp card in 2010 Topps Magic, and has also appeared in Panini Golden Age, Topps Heritage, Topps flagship, and Topps Allen and Ginter, along with the Decision 2016 and Decision 2020 election trading cards.

Though it took a decade after his assassination for him to receive a card and several decades more for cards to start popping up frequently, Dr. King is now a more regular feature in mainstream trading card products. I hope this trend continues, and I’m going to be on the lookout for both a 1973 OK VIP and 2009 Topps American Heritage card to add to my collection.