Always one of the better value boxes out there, 2021 Topps Pro Debut once again hits all the right notes for fans of prospects and minor leaguers. 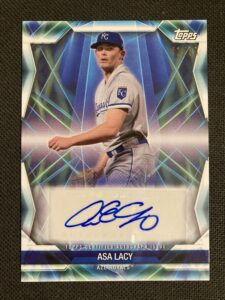 Despite being one of the cheaper hobby boxes available all year, Pro Debut generally packs a punch with 2 autos and 2 relics per box. This year, since there was no 2020 MiLB season from which to draw relics, all 4 hits in a hobby box are autographs. Jumbo boxes have only 3 autographs, but also come with 36 chrome cards, which are not available in the hobby format.

Hobby boxes definitely give you more fun ripping — with 24 packs and 8 cards per pack, you’ll be entertained for quite a while. Jumbo boxes have just 6 packs, but at 24 cards per pack they’re certainly heftier. Neither format will yield a complete base set. The base set, clocking in at 200 cards, features a 50-card draft picks subset, done up in the 1991 Topps design.

I opened two hobby boxes. In the first box, I pulled an Asa Lacy Future Cornerstones auto numbered to 99. Lacy was the 4th overall pick in the 2020 Draft. I also got a gold border auto numbered to 50 of Andre Lipcius and a bunch of inserts. My favorite inserts were the MiLB Legends cards, featuring former big leaguers in their minor league uniforms using the 1964 Topps design. 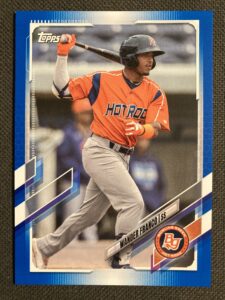 My second box yielded another gold auto — this one of Michael McAvene — and a base auto of Luisangel Acuña, Ronald’s brother. This box also provided the two best parallels I pulled. The blue border Wander Franco numbered to 150 was the most beautiful, but the most valuable was the short print photo variation of top prospect Spencer Torkelson. Tork’s base card is usually one of the 1991 style Draft Pick cards, but the photo variation instead displays him on one of the regular base cards.

The price point can’t be beaten and with 4 autos per box (3 per jumbo box) it’s tough to go wrong. Set collectors, fret not: my 2 hobby boxes were enough to complete the 200 card set. I can’t recommend Pro Debut strongly enough to any collector.