For 16 years now, Allen and Ginter has delivered a unique combination of baseball players, pop culture icons, and people you have to Google in order to know who they are. The 2021 edition of Ginter is no different — and that’s just how it should be.

A&G is always one of my favorite products, but it’s never one I rush out to buy. That’s because it’s never laden with hot rookie cards and it comes out at a time each year when baseball card interests are starting to wane because football season is getting ready to begin. However, when I see Ginter for the first time this year, I do buy it.

After its release in August, I waited over a month before I started getting itchy and looking for blaster boxes at Target and Walmart. I consistently came up empty, until a friend of mine told me about a Black Friday sale on Ginter blasters at none other than GameStop. With a buy 2 get 1 free deal and free shipping, I gobbled up 3 blasters and eagerly awaited their arrival.

By this point in time, the Allen and Ginter product line is a well-oiled machine with few surprises. Collectors know they’ll get a smattering if subjects in each pack, with one mini per pack as well. Some of the minis will be inserts, and some inserts are full-sized as well. Cards over 300 are short prints, albeit not too short as those cards are seeded every other pack. Rip cards appear a few per hobby case, but very infrequently in retail products.

Hits are generally not easy to pull, with relics being the most common. Across my 3 blasters, I had one hit: a relic card of Kelly Wrangham, a man who has played and coached soft pitch softball in North Dakota for nearly three decades.

But Allen and Ginter really isn’t about the hits. Most collectors of Ginter are set builders. I have a different prize: the minis. There’s something about the tobacco card-sized parallels that has pulled me in from the first box of Allen and Ginter I opened in 2006. Maybe it’s my affinity for pre-war vintage, or maybe it’s just that the simplistic Ginter design looks so beautiful when scaled down. In any event, opening Allen and Ginter is generally a fast experience for me, as I go right to the middle of the pack to retrieve my minis.

The mini insert sets are always fun and interesting. I got a World Leader (Andres Lopez Obrador, the president of Mexico) and two of the interstellar-themed far Far Away inserts. But my favorite mini insert was the Mascots in Real Life, which shows…well, mascots in real life. Despite the name, you’re not seeing the real person beneath the character’s costume; rather, you’re seeing the real-world object upon which the mascot is based. My Tiger card showcased a real tiger, then told me about the Detroit Tigers mascot on the back. 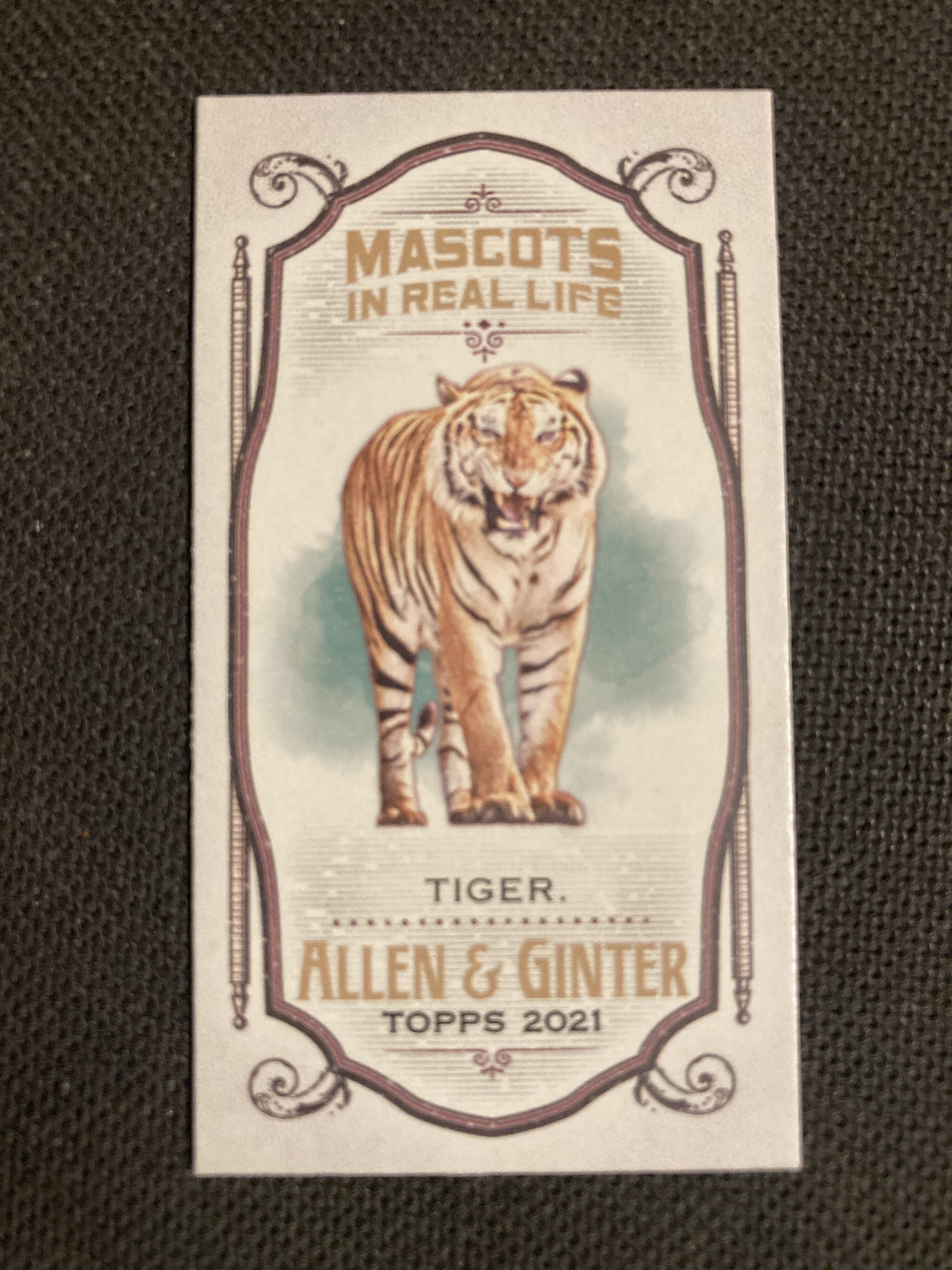 I’ve come to expect all of the base mini variations — black border, A&G back, and so on — but this year brought a new and welcome twist in the form of Rookie Design Variations. Rookie cards are my favorite, and these variations use a design similar to the very first Allen and Ginter set from 2006, which remains my favorite design. 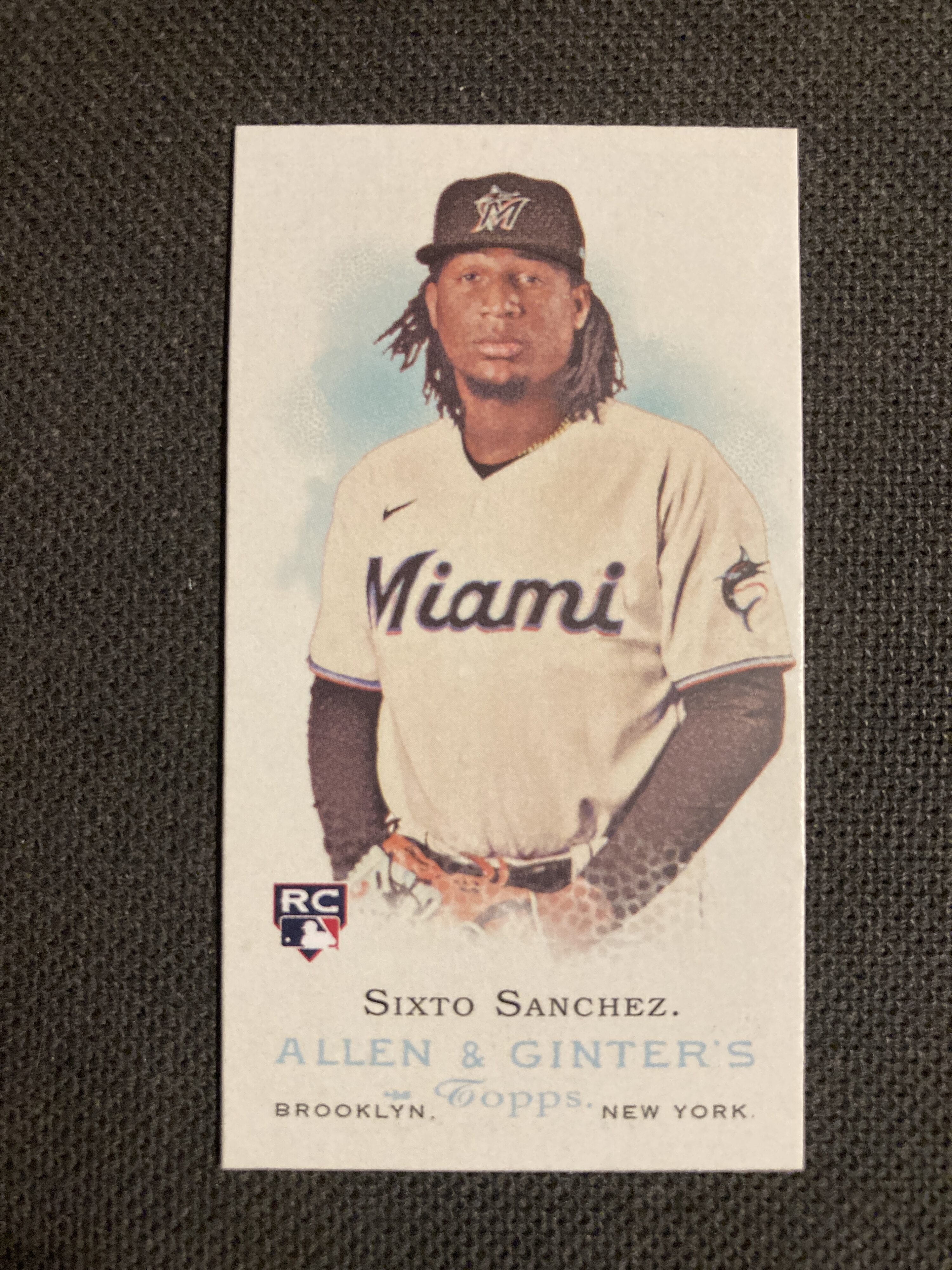 Big hit chasers should probably shy away from Allen and Ginter, as they likely already knew. But for any set builders, rookie collectors, non-sport enthusiasts, or just folks looking for a fun and cheap rip, Ginter is always a good buy.