If you loved the 2019 Topps design, then 2019 Topps Update is your last chance to see it on new cards. The 300 card set featuring midseason call ups, All-Stars, and players on their new teams was released last week.
Topps sent me a hobby box to review. Each hobby box comes with 24 packs, and each pack has 14 cards. That means that you should be able to get a complete base set in addition to the inserts that you pull.
For this release, Topps put its continuity promo silver pack inside the box. In the past it has been up to store owners or distributors to include one pack per hobby box and two packs per jumbo box. Because this sometimes wouldn’t happen, the company decided to include the packs directly in the box as sort of a box topper.
I’ve opened my share of silver packs over the last few years, which include Chrome versions of the anniversary designs which have standard inserts within the set. This year‘s theme was in the style of the 1984 design. Of all the silver packs I have opened, I only once got anything besides a base card, and that was a gold parallel numbered to 50. My luck changed this time, however, as the last card in my silver pack was an autograph of Braves rookie Austin Riley numbered to 149. What a way to start the box off! 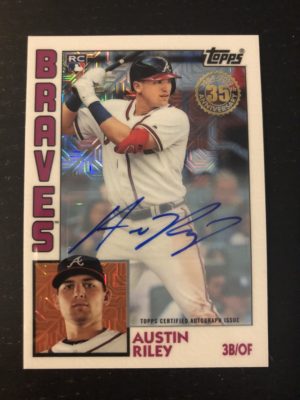 Update always packs a punch with rookies and this year was no different. And while most of the big names already had rookie cards in series 2, it’s still pretty great to get multiple Vladimir Guerrero Jr. and Pete Alonso Rockies, in addition to the lone Fernando Tatis Jr. that appears on the checklist. 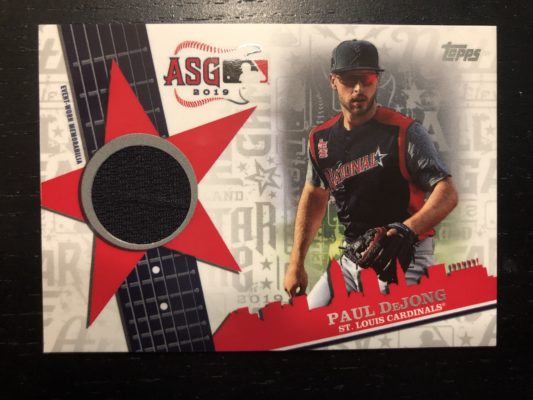 Hobby boxes promise one autograph or relic card per box. I pulled an All Star Stitches jersey card of Cardinals fan favorite Paul DeJong. Because the All-Star game was in Cleveland this year, the logo was in the shape of a guitar to represent the Rock and Roll Hall of Fame. Topps did an excellent job of designing these All-Star relic cards, with the jersey swatch appearing in the center of a star overlaid on the neck of a guitar.
There are also plenty of inserts and variations available. I got one short print, a rookie photo variation of Cole Tucker. Inserts mostly included continuations of those started in Series 1 and 2, namely Iconic Card Reprints and 150 Greatest, but the Family Business insert, featuring players who have also had relatives play on the big leagues, was a new one. Parallels were standard as well, with gold border, foil, and 150 years versions abounding. The normal tougher parallels, like black borders, also exist, though I didn’t get any.
Like most products in the flagship Topps line, 2019 Topps Update packs a lot of value for a fairly low sticker price. With just a regular hobby box, you can get a complete base set, one hit, and some really cool inserts and parallels. And if past Update sets are any indication, there will be a rookie card in the set that becomes a hot ticket item in the next few years. It’s hard to go wrong with this product.