Always popular with collectors nostalgic for 1990s products, the 2019 iteration of Topps High Tek was released last week. Printed on clear plastic cards and consisting of multiple variations and patterns, Tek has been reformatted — again — to give collectors more to look forward to. The 2016 release was a small format box, with just 8 cards per box including 1 autograph. While 2017 and 2018 upped the total card count five-fold to 40, the number of autographs only doubled, to 2. This year, the total card count has come down to just 18 cards per master box, but that now includes 3 autographs.
Topps sent me a box of High Tek to review. The master box — again, a new concept in this year’s revamp — contains 3 mini boxes. Each mini box is home to one on-card autograph and two parallels in addition to 3 base cards.
I’m not one for different patterns on the same card, and it seems that Topps has done away with that, though I can’t confirm it. Sale sheets noted there were 3 different base designs. However, it seems from my online searching that each player comes with only one design, a far cry from past years where the same card could be found with multiple backgrounds. No matter, because the cards are beautiful as always. The thick stock plastic that shines when it catches the light is both modern and retro in a way that harkens back memories of me opening packs of the original Tek product as a kid in 1998.
Now for the good stuff. As noted, each box has 3 on-card autographs. I received two rookie autos — hurlers Kyle Wright and Brad Keller — as well as an autograph of a third pitcher you may have heard of, Roger Clemens. The Clemens is a black parallel numbered to 50 copies.

As for parallels, I received the requisite 6. Three of them were unnumbered: two blues and a white, which appear to be so common that the odds aren’t stated on the boxes. (Worth noting: the white isn’t in the photo as it looks so similar to the base cards that I didn’t even notice it until later when I went searching for my 6th promised parallel.) I also got a green #/150 of Jorge Alfaro, a purple #/99 of Whit Merrifield, and a pink #/75 of George Springer. 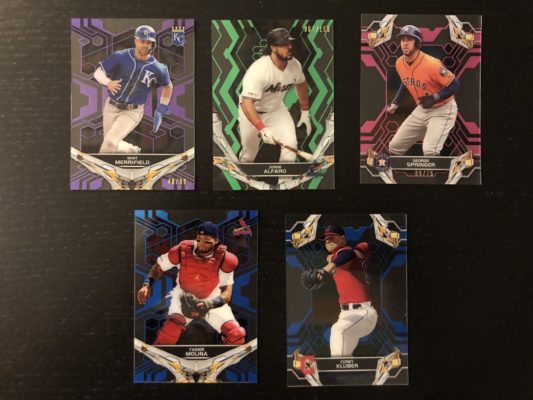 In my opinion, opening a single mini-box would be too disappointing to me, because receiving only 6 of these beautiful cards would be tough. So do yourself a favor — buy the master box and get the joy of nabbing all 18 of these cards.